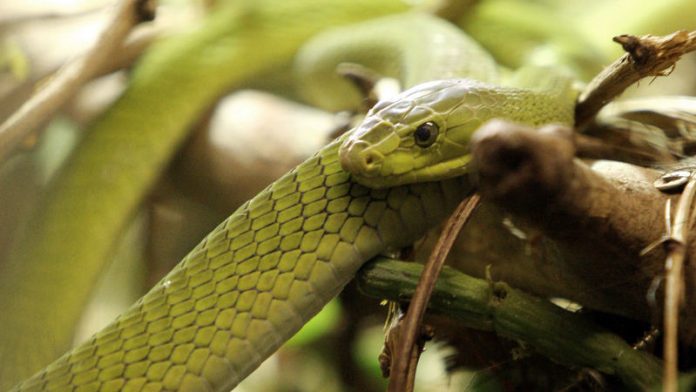 The report in the journal Science offers new evidence to support the notion that primates evolved vision skills that enable them see snakes quickly in order survive the threats snakes pose in the jungle.

"It really strengthens the argument that snakes are very important for the evolution of primates," said lead co-author Lynne Isbell, a professor in the anthropology department at the University of California Davis.

Certain neurons respond "selectively" to images of snakes, and they outpace comparable neurons that react to visuals of faces, hands or geometric shapes, the researchers said.

Researchers said they believe the monkeys had no chance to encounter snakes prior to the experiment.

Scientists surgically implanted micro-electrodes in a part of the brain known as the pulvinar, which is involved in visual attention and the fast processing of threatening images.

Then they showed the monkeys various color images on a computer screen, including snakes in various positions, threatening monkey faces, pictures of monkey hands and simple shapes like stars or squares.

Seeing a snake caused the brain to fire off rapid fear responses that were unparalleled by those seen in reaction to faces, hands or shapes.

Researchers found that of about 100 neurons that fired off when presented with at least one of the image types, 40% had the largest response to snakes.

That was the biggest group, followed by almost 29% that were superior at responding to faces.

While researchers have long known that primates have an uncanny ability to see snakes even in cluttered surroundings, the latest data adds a new answer to the question of why.

Origin of primates
"Snakes are largely responsible for the origin of primates. Vision is what separates primates from other mammals. A lot of the structures in our brain are devoted to vision," said Isbell, who wrote a book on the topic in 2011 called The Fruit, the Tree, and the Serpent: Why We See So Well.

"I pulled together indirect evidence," she stated. "Here is the first time that somebody has come along and actually tested some of the predictions in the book and I am really gratified that it was supported."

While the study included only two monkeys, future research could focus on responses to other predators in primates, as well as the potential for learning more about how the human brain responds, Isbell said.

Susan Mineka, a professor of clinical psychology at Northwestern University and an expert on primates, described the work as "absolutely fascinating" and "really important."

She said one potential weakness was that the research team seemed unable to say for certain that the monkeys studied had never encountered a snake.

"It is too bad that they didn't also document what these monkeys' behavioral responses to snakes were like," Mineka added.

"We have known that many species of monkeys either have an innate fear of snakes or pick up a fear of snakes very readily. This provides a probable mechanism. That has been a huge question in the literature." –  AFP