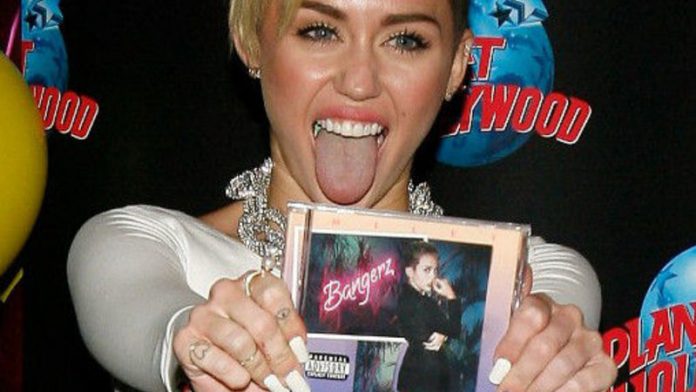 The controversy, the videos, the outright rage from critics and oh heavens, the twerking – all leading up to 21-year-old Miley Cyrus' release of sophomore album Bangerz.

There is no doubt that the pop star provocateur has been hell-bent on getting her new record to the top, no matter what it takes. And it will get to the top, not only because it piques curiosity and is at the forefront of where pop is heading right now, but because it's actually good.

Think an extended version of We Can't Stop, that haunting hit single that, love it or hate it, you couldn't get out of your head.

It's cheeky, drenched in sex (the ratchet kind), and a little scary. Cyrus pulls in dance, electro, dubstep, hip-hop and R&B and douses it with 80s synth for good measure. There's even some good 'ole barnyard country stomping (a la Billy-Ray Cyrus) on 4×4.

If you didn't notice Cyrus's new ghetto-esque image yet, this album makes it abundantly clear – Cyrus thinks she ain't nothing but a G-thang, albeit one from the US South.

Like all pop albums, the lyrical themes here aren't exactly boundary-breaking. Cyrus sings about three things: love, money and partying. Oh, and lest we forget, her infatuation with proving that she's hitting bongs and taking molly (ecstasy).

If you can forgive Miley for trying a little too hard, and for wearing white mens' jocks in most of her cover art, Bangerz will be your album for a dance-and-grind-filled summer.

Stand-outs: We can't stop; Adore You