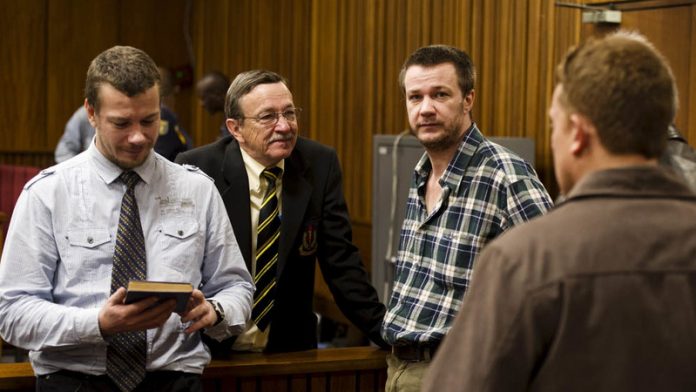 In small, closed communities run by far-right extremists and white supremacists in Europe and the United States, there were calls for a "rescue" of the Boeremag members shortly after they were sentenced on Tuesday. Heroes of the white nation, said a group leader in Alabama, should not be allowed to languish in a black prison while Aryans can still bear arms.

But in South Africa – where the lesson may have sunk in that the justice system will not tolerate attempts to trigger a race war – the language used by Boeremag supporters and related parties was mostly of defiant mourning.

"The boer nation feels resentful about the sentences," said André Visagie, leader of the far-right umbrella group the Geloftevolk Republikeine, in a reaction statement to the sentences of the Boeremag group, ranging from effective terms of five years up to 25 years for leaders.

That may be putting it mildly, but not entirely inaccurately.

In public and private, far-right supporters spread across dozens of organisations expressed various degrees of resentment towards the government, its apparatus (from police to courts) and its treatment of men many still consider heroes of a just cause. That cause, they said, was the safety of their people, specifically their safety from racially-motivated attacks on farmers.

'Not a bunch of fanatical criminals'
It may seem a peculiar argument when it comes to a group who sought to overthrow the government through violence and, ultimately, to drive black people out of the country using fear, but it is one that has been carefully framed by Boeremag leaders themselves.

"It is important to realise that it is not a bunch of fanatical criminals who were involved in the Boeremag," wrote Dr Lets Pretorius to his supporters on the day he was sentenced to an effective 20 years in prison. "That nobody did it for self-enrichment and that it was true boere preparing and planning with the eye on a crisis of the nation that was to come. Currently we are exposed to such a crisis and hear about a cruel, continuing and relentless murder of our nation."

Boere, Pretorius wrote, are being murdered, humiliated and discriminated against. But, he said, the world should take notice that his people will never surrender and will be independent "one day".

Pretorius's son Wilhelm, one of three sentenced to varying terms for their own involvement in the plot and its execution, was singing from the same hymn sheet. Self-reinvented as the poet Boerius in prison during the trial, Wilhelm Pretorius published a final piece of mixed prose and poetry this week. In it, he speaks of the flame of belief, exile, maintaining faith – and the ultimate regaining of Afrikaner independence.

There were many who accepted the framing that the Pretorius men and their comrades foresaw a white genocide in South Africa and were acting to prevent it.

"I read through today's [Tuesday's] judgment and the judge reckoning that there would have been a bloodbath had they [the Boeremag group] succeeded in what the state alleges they wanted to do," wrote singer and Red October organiser Sunette Bridges on Tuesday. "And then I read the names of our people [who] have already been murdered this week … I read about the fact that more than 180 000 people have been murdered in the past 10 years under ANC rule … and then I wonder what is the judge's idea of a bloodbath?"

Denigration
Bridges and Red October, supported by the likes of entertainment icon Steve Hofmeyr, recently marched on the Union Buildings to proclaim that a genocide of white Afrikaners is indeed underway, even if the numbers do not stack up in proof. The genocide, they said (after their statistics were challenged), was also in the form of a denigration of culture and a destruction of language.

That approach saw Red October pull support from a small but vocal group of white Afrikaans speakers who had not previously associated themselves with the far right; those who spoke to the Mail & Guardian at the time said they felt under threat from crime, and that Red October offered the only platform for them to express their outrage.

And on Tuesday, those previous moderate right wingers found themselves, through three degrees of separation, associated with the Boeremag and with the kind of open racism carefully avoided by both Red October and the majority of the fragmented far-right groups in South Africa. Unsurprisingly, the association did not sit well with everyone.

"We said to the government, 'you must protect us from this violence, you must do something' that day," said a Red October supporter who attended the Pretoria march of the organisation. "Now we say these people who planned violence should not have gone to jail for so long … I feel for their families. No man."