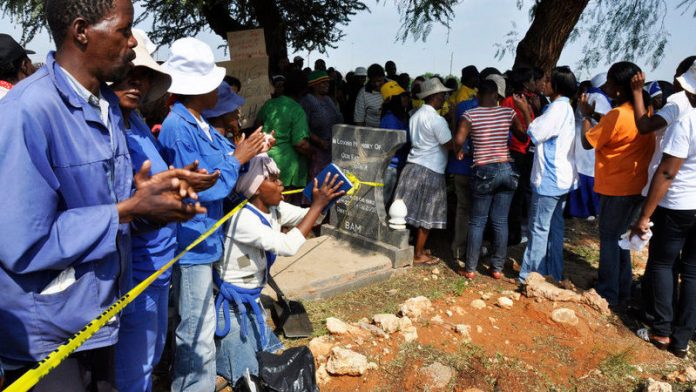 Her name is Letty Wapad. She was a 24-year-old mother and when she died, it seemed like no one outside of her community even noticed. Her attackers stabbed her many times, raped her repeatedly, cut her open from chest to abdomen, removed her intestines, shoved a fist-sized rock into her vagina and left her for dead.

She died three years ago, disemboweled and alone, under a pepper tree at a cemetery in Kimberley in the Northern Cape. Her killer were the brothers Archibald Itumeleng and Moleko Chweu, Thabiso Majama, and a 15-year-old.

It was as if she refused to die, said experts during the trial of her attackers. She lived in agony for 20 more minutes after the four men left the scene.

The ABC Cemetery is surrounded by houses. No one heard Letty's screams, or if they did, they did not listen.

The forensic pathologist who conducted Wapad's autopsy would testify in 2010 that this was the most gruesome case she dealt with in her career of 16 years and 10 000 bodies.

"It was the first time I'd had to leave the room to pull myself together," Dr Denise Louwrens told the court.

Tania Birch, the NPA prosecutor assigned to the case, is dogged and rigorous. Three of Letty's killers are serving three life sentences plus 10 years each (the extra 10 for the violation of a corpse). The fourth was a minor and a first-time offender at the time. Lawyers think he might be eligible for parole in five years.

None of them accepted guilt for Letty's death. Like Anene Booysen's killer, Johannes Kana, none expressed remorse.

Anene's intestines were dumped in the sand at the construction site where she was attacked. Letty's intestines decorated a gravestone.

The detective who found her, Detective Captain Doggie Magugu, told the court how he cried at the sight.

Questions with no answers
No one knows why 15-year-old Michael* and his friends weren't satisfied with raping and stabbing Letty, and why they tore out her innards and strew them over a gravestone. Michael may not have confessed to the police, but he confessed to his mother and she went to the cops. 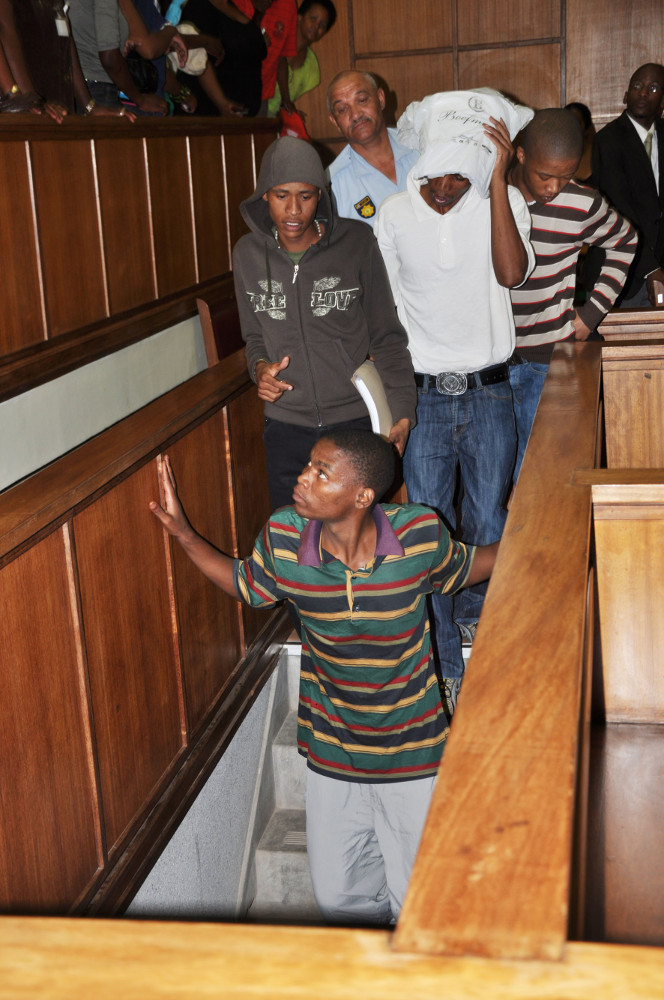 She became a witness for the state. With her clutched handbag and steady resolve, she told the court about the night Letty died.

Michael came home from the tavern at sunrise. Something was wrong. Almost immediately he told her that he had been involved in something terrible.

The first crime he would ever commit would be the most violent in Magugu's 25-year institutional memory.

Sources close to Wapad's case, who asked not to be named, said Michael had a "professionally-done" tattoo on his ankle at the time of his arrest. It was the sonop (sunrise) tattoo: the mark of the 26's. But he had never been to prison.

"He was not a hardened criminal and he made absolutely no attempt to avoid a lengthy prison sentence. Maybe he wanted to go to prison. That's certainly the way it looked to me," said a source who interviewed him.

Yet a neighbour who grew up in Michael's community found the idea laughable.

"You can get those tattoos under a tree in Roodepan for R10. Guys want them because they are cool. It means nothing to them. The gangs aren't pure anymore."

"It's the same modus operandi as the Wapad case."

This journalist has made several attempts to talk to Michael. The department of correctional services has ignored these attempts. He is the only one of the four killers who can be interviewed as he is not serving a maximum sentence.

The gang theory is also refuted by a criminal lawyer in Kimberley who regularly sees clients at the Kimberley Correctional Centre.

Yes, he said, murders are planned from the inside. And yes, there are 26's on the outside. But they are mostly car thieves. They bring money into the prisons. They are not killers.

Besides, to kill a woman is nothing. To become a general in the gangs you must kill a man, he says.

Nothing but thugs
?So if the four were not gangsters, why did they disembowel her?

Ancient Samurais would disembowel themselves as self-inflicted punishment for the worst crime a Samurai could commit: dishonour. Legend has it that during the Cambodian revolution, and the time of Pol Pot, women were disemboweled so that their attackers could see their livers, a sign of fertility.

The lawyer insists Letty's killers didn't care about any of that.

"They cut her open because they are thugs. Don't read too much into it," he says.

Another theory touted in police circles during the Wapad trial was that the killing was a ritual act of the occult. The theory meant nothing to the court: it was not raised in any serious sense. At best, it was an early attempt by the police to try and profile Letty's killers.

At worst, it was a poor attempt by a relatively conservative community to locate the horror of the murder within a context that was acceptable. If the devil made them do it, and the devil is real, then the crimes are fathomable. The devil is more fathomable than the depths of human evil.

Nevertheless, there was no conspiracy about it during the trial, no mitigating factors either. This was no fault of the accuseds' lawyers. The accused who put forward almost no defence. They didn't even try.

The long evidence table in the courtroom was eye-level with the accused bench. As if it was possible to forget how Letty was tortured, the rock, extracted from Letty's corpse, stayed on the evidence table until the trial was over. 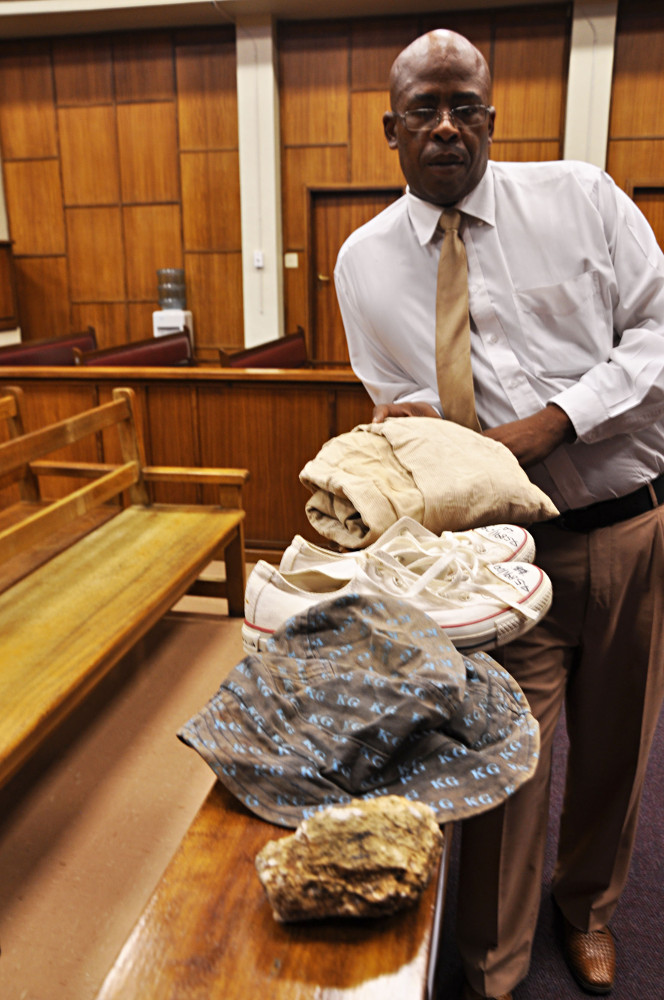 The four didn't flinch. The older of the two brothers, Archibald, slouched easily, staring at his shoes. The prosecution believed he was the ring-leader; he stabbed Letty first, passing the knife around to the other three.

At the end of it all they left behind a bloodied hat and All Star shoes.

Haunting case
Magugu is a formidable detective. It was dark when he arrived at the cemetery scene on March 29. He kneeled down under the pepper tree, at Letty's body now covered with a blanket, and as the sun rose to illuminate the true horror of Lettie's death Magugu wept into the red sand.

He did not sleep for days. His team searched night and day for the killers who matched the hat and sneakers.

In an interview in the Diamond Fields Advertiser, shortly after the sentencing, Magugu was proud, but only just. This case would always haunt him, because he had not been able to prove which of the four performed what act. Who picked up the rock? Who cut her open? Who was the butcher who manhandled her intestines and, like a string of Christmas lights, decorated a gravestone?

He would never know, Magugu said.

If the cynics' theory holds true, that victims must compete for space in the public discourse with only the most violent crimes grabbing headlines, then Letty's death should have won.

But it did not, and she remains mostly unknown. She is not a rallying call for activists or a martyr. She died in pain, on a hot summer's night, naked and alone.

* Not this real name