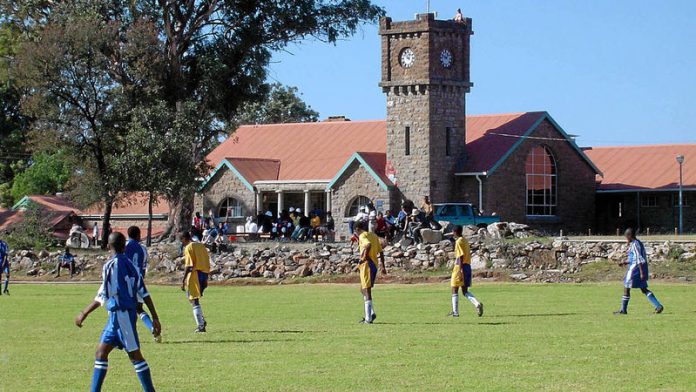 In 1895 three Batswana chiefs visited London to ask Queen Victoria for her assistance in establishing a school of excellence for their people.

Tiger Kloof was opened in 1904 by the London Missionary Society and educated the elite of the Batswana people for 50 years, including the first two presidents of Botswana.

It remains one of South Africa’s historic schools, serving the communities around Vryburg in the North West province.

The school was closed down in 1962 under the Bantu Education Act, and was reopened in 1995 as a result of an initiative between former learners, local business people and charitable donors.

The school aims to provide a quality education for local disadvantaged children.

While it is a sustainable project in the long term, Tiger Kloof is reliant on the Solon Foundation for funding to provide bursaries to a number of children whose parents or guardians cannot afford the fees.

To this end, the foundation provides the school with R5-million annually. The bursaries are allocated through a rigorous screening process on the basis of financial need, not ability.

In addition, there are a number of private donors from abroad that provide for bursaries and sponsor individuals. This has resulted in the majority of the children who live in the hostels being there on assistance.

Tiger Kloof intends to develop facilities that will provide alternative income streams and make the school able to stand on its own.

It plans to restore old buildings for commercial use, develop sport facilities, as well as a leadership and outward-bound centre.

The school is also using the 1 200h grounds it owns to run a cattle herd, the meat of which is used to subsidise the kitchens; it also farms chickens, and gets vegetables from its garden.

These farming practices are used to teach learners how to take care of the environment.

“In some ways Tiger Kloof is just a rural school in a very remote and poor part of the country,” says the school’s chief executive, Mark Boobbyer.

“In other ways it offers something unique — it gives its students not just a good education, but also provides them with opportunities to link with schools overseas and a programme of engagement with service projects within the local community.”

The school is a member of the International Round Square, an affiliation of schools from around the world that share common values of service, democracy, adventure, care for the environment and leadership.

Not only does the school play host to visiting groups from other parts of the world, but its teachers and students also have the opportunity to attend conferences around the globe.

These visits can also lead to opportunities for learners at the school to go on exchanges and study overseas. All the money raised by the school goes towards the work it does. No funds are spent on marketing the school and its accomplishments.

“Tiger Kloof sets an example to other schools on how to provide an all-round education for children from disadvantaged backgrounds. It uses its environment to educate,” says Boobbyer.

“The school also uses the needs in the community to develop a sense of service towards those who have very little. Furthermore, it has developed extensive networks of partner schools overseas that visit regularly to join in its service projects.”

Tiger Kloof plans to develop a parenting course to provide assistance and support to parents who are struggling to bring up their children in an environment full of violence and abuse.

“We view the development of the intellectual, physical, cultural and spiritual sides of students as equally important,” says Boobbyer.

“Many of our children come from areas where there is considerable poverty. Many of them have already experienced terrible things in their lives. Tiger Kloof gives young people hope and direction and a set of values on which they can build and become empowered citizens.”

A recent history
In 1990, following the release of Nelson Mandela, former students, called Old Tigers, and local businessmen got together to make a plan to reopen the school.

The old buildings, abandoned for 30 years and used as sheds for livestock, were renovated and restored.

The school reopened in 1995 and was rededicated in a ceremony led by Archbishop Emeritus Desmond Tutu, whose mother had attended the school. The school has about 670 students.

The primary school is housed in what was once the girls’ school. The senior school of 410 learners has about 180 boarders and is housed in the old boys’ school.