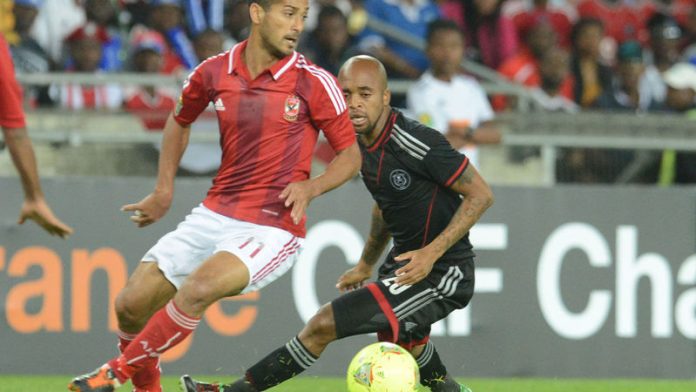 Thabo Matlaba scored an equaliser in the last minute of additional time to salvage a 1-1 draw against Al-Ahly in the first leg of the Caf Champions League final at Orlando Stadium on Saturday night.

A devastating first-half free-kick from Egyptian Mohamed Aboutrika put the visitors ahead early, but Pirates were made to dig deep and Matlaba stole a draw in the 93rd minute, after four minutes of extra time were added.

Aboutrika showed his class as Ahly made the most of a costly error from the Pirates back four, punishing the home side with an unstoppable set-piece early in the opening stanza.

With the final played over two legs, home and away, Ahly would head home with a slight advantage, having scored an away goal. The Buccaneers though, would fancy their chances, thanks to Matlaba's late heroics.

The hosts were quickest out the gates and Lennox Bacela, Oupa Manyisa and Daine Klate got close inside five minutes, but none really threatened as Ahly struggled to find their feet.

An elementary mistake at the back led to the opener against the run of play, as Ahly capitalised on an unforced error from the Pirates defence.

Ayanda Gcaba failed to clear a simple ball, opting to play onto his foot rather than clearing with his head.

Ahly regained possession on the edge of the area from Gcaba's heavy touch, forcing him into making a clumsy tackle which brought down his opponent in a dangerous position.

Aboutrika unleashed a ferocious effort from the dead ball situation, beating goalkeeper Senzo Meyiwa with a shot few goalkeepers would have kept out as the ball sailed into the top right corner of the goal.

The Sea Robbers responded well, but failed to trouble Ahly shot-stopper Sherif Ekramy and could only manage several long-distance attempts which went harmlessly high and wide of the mark.

Ahmed El-Zaher thought he had doubled Ahly's lead shortly after the interval, but the Egyptian attacker's goal was ruled offside, though television replays suggested otherwise.

The disallowed goal sparked the home side into action as Tlou Segolela's driven effort forced a good stop from Ekramy, who did well to keep Ahly in the lead.

Andile Jali came even closer in the 58th minute, after he was allowed space before getting his shot away, but Ekramy pulled off a fantastic diving save to deny Jali the equaliser.

However, Pirates were not done yet and, as the clock ticked away in added time, Matlaba picked up on a pass, danced his way into the area and slotted home with his left foot, as the capacity crowd at the Orlando Stadium erupted.

Pirates travel to the Egyptian capital next week and would be looking to overturn Saturday's result, when the two sides meet in the deciding second leg next Sunday. – Sapa