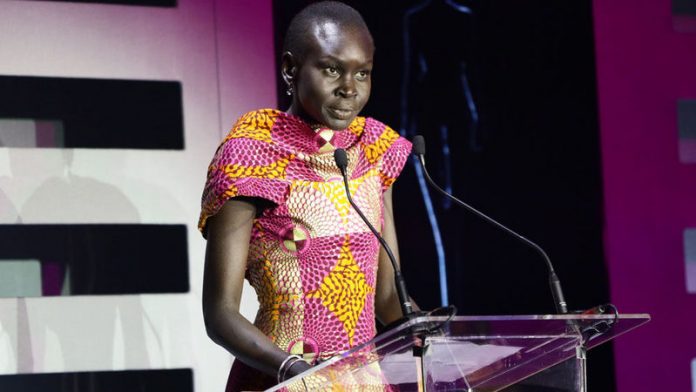 Model Alek Wek joined in on the Mercedes-Benz Fashion Week Africa festivities this week. The South Sudanese born model was one of the judges at the African Fashion International (AFI) Africa Fashion awards.

The fashion shows, which showcased work by more than 30 designers from 15 countries across the continent, kicked off on Wednesday October 30, and drew to a close on Saturday night.

Some of the designers who showcased their designs were Taibo Bacar (winner of the 2012 Designer of the Year – AFI Africa Fashion awards) from Mozambique, Mille Collines from Rwanda, Mina Evans and Duaba Serwa from Ghana, David Tlale, Marianne Fassler and Thula Sindi from South Africa.

Malcolm Kluk and Christiaan Gabriel du Toit from Kluk CGDT were announced as the designer of the year at the prize giving ceremony held at Montecasino on Sunday evening.

Kluk CGDT ended the fashion week on Saturday night at Freedom Park in Pretoria. Guests were seated around a water-filled amphitheatre, which eventually turned into a pond through which the models showed off their gowns before a backdrop of fountains and fireworks.

Designer of the year
Kluk CGDT

Emerging designer of the year
Loin Cloth and Ashes

Model of the year
Grace Bol

African designers to descend on Tshwane for fashion week

Get ready for SA Fashion Week 2013