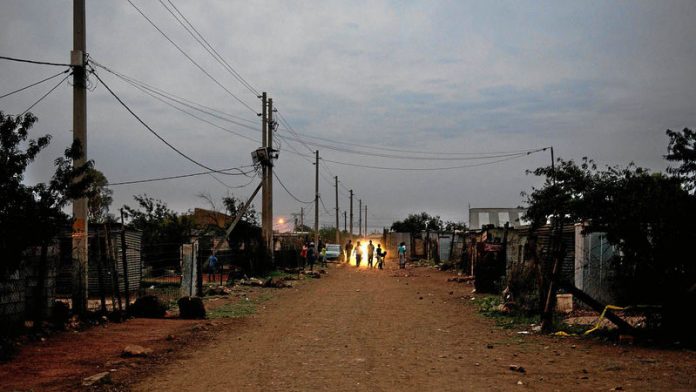 After months of living in fear of gangsters called the Casanovas and the Vandals, who rob and sometimes end up stabbing their victims, the people of Khutsong woke up to find pamphlets in their yards on Sunday morning.

They urged men not to go to church but to congregate on an open field, now used as a football pitch, to discuss crime.

The same field was a meeting place when the Khutsong community formed a united front against incorporation into North West several years ago.

Word on the street on Sunday was that the men should arrive armed to participate in what was called "Operation Shapa Tsotsi".

Shapa means to beat up, but the community later went far beyond that. By the time the operation was over on Sunday night, six people lay dead.

The police have confirmed that at least two of those killed were convicted thieves who were recently released from jail, and another, who was charged with other offences, was out on bail. The others have not yet been identified.

"There was no one who was killed who was innocent," said a young woman who works in youth development.

Stop the crowd
On Monday Police Minister Nathi Mthethwa strongly condemned vigilantism and said people "should never take the law into their own hands, as it is a criminal offence".

But by Thursday afternoon the police had yet to arrest anyone for the killings.

This does not come as a surprise to community members, who claim police witnessed the killings but did nothing. Witnesses insist that, when some of the men were killed, the police were parked not far

away and did not get out of their vehicles or try to stop the crowd.

But the police deny this. They say their vehicles were stoned when they approached the mob.

Community members say some local police officers have complained they are tired of arresting the youths because they are freed by the courts for being under age.

"It was not clear whether the police were afraid of the huge mob or they approved of the whole thing. It was as if they enjoyed the show," an eyewitness said.

Skirmishes
Community members are preparing themselves for more action on Friday and Sunday, when they claim they are going to try to "clean" the township "forever".

They claim that, for about two years the Casano­vas – teenagers and young men ranging in age from about 14 to 23 – have walked around in groups and robbed whoever they come across. Sometimes they shut the doors of shebeens and robbed everyone inside.

Earlier this year there were also skirmishes in the streets when the Casanovas fought against the Vandals. Some of their disputes were said to have originated in jail.

But, as the community goes on with life, triumphant about some of the most brutal killings seen in South Africa in a long time, no one is taking responsibility for them. No one knows who distributed the pamphlets or led the search for the Casanovas.

But all appear to be relieved that they can walk the streets in the evenings without fear and that the festive season will be free of gangsters. And the credit for this goes not to police action but to the brutality of the masses.

Community policing forums
In many ways it is similar to the mass protests over the forced incorporation of the area into North West. The community fought through the courts for a long time and by marching and destroying property, resisting pressure from the government to make them see sense.

But during four years of mass protest, no one was killed.

The clear message is that, once communities lose hope in the formal structures of governance, there can be no saying what they will resort to. And once they embark on their own path, it’s difficult to control them.

This also means that all the structures the government put into place in the new dispensation, such as community policing forums, ward committees and community development workers, are not working.

This week, after a community had suffered two long, intolerable years at the hands of gangsters, the situation exploded in a very ugly way.

A policeman who works in Khutsong spoke to the Mail & Guardian this week about his frustration at how young gangsters who have been arrested for terrorising the community are soon set free.

"I am not speaking only for myself, but for all other detectives. In my case, I arrested a 17-year-old for murder, but he was released after appearing with one of his parents. I think the parents must tell the courts that they are unable to control these kids. It's a shit law, this Child Justice Act."

The policeman said magistrates should use their powers to send young criminals accused of crimes to juvenile detention centres. " I think magistrates don't want to be harsh by sending them to these centres, but they should be doing that."

He said policemen don't condone mob justice, but the truth was that, since the killing of suspected criminals last Sunday, there had been no new cases of robbery, housebreaking or theft in the area.

But Professor Ann Skelton from the Centre for Child law at the University of Pretoria, who was involved in drafting the Child Justice Act, says policemen often oversimplified the law, as the Act provides for circumstances in which children can be kept in custody.

"If it's a minor offence, yes, children should released. But if it is a serious offences such as rape or murder, policemen are allowed to argue for children accused of such crimes to be kept in a secure facility, or even prison, sometimes. These include repeat offenders.

"Police are allowed to speak to prosecutors and point out that [in some] cases there is an argument for keeping suspects in custody. We are concerned that some of the police are not properly trained in the correct implementation of the law."