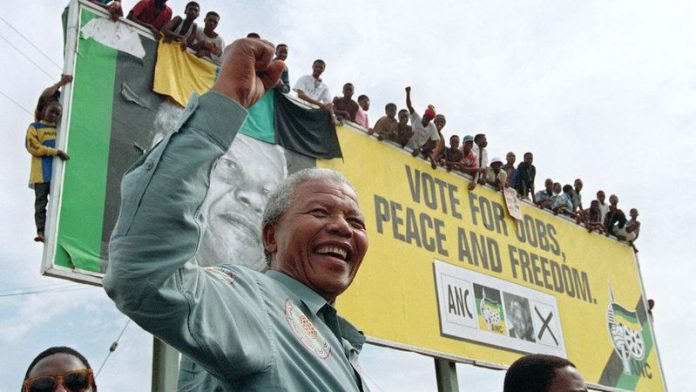 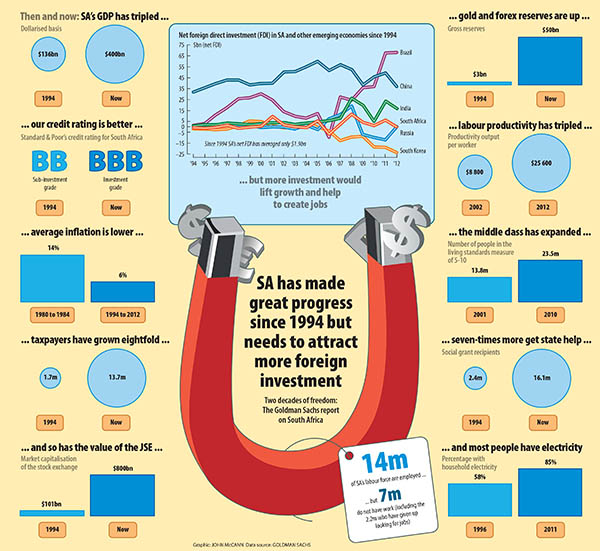 "The first thing you need to know about Goldman Sachs," Rolling Stone journalist Matt Taibbi famously wrote in 2009, "is that it's everywhere.

The world's most powerful investment bank is a great vampire squid wrapped around the face of humanity, relentlessly jamming its blood funnel into anything that smells like money."

Four years later, the squid is as ubiquitous as ever. So it should come as no surprise that Goldman Sachs this week published a report to provide clarity and guidance to the most southern tip of Africa.

Titled "Two Decades of Freedom: What South Africa Is Doing with It, and What Needs To Be Done", it analyses how South Africa has changed in the past 20 years and identifies 10 areas in which it has made structural advances and 10 large challenges that remain to be tackled.

Its aim is to contribute to a "more balanced narrative" on South Africa, "one which, in the wake of 2012's tragic events at Marikana, had become somewhat hysterical, short-term and often negative".

Then vs Now
It begins with a snapshot of then and now, drawn from census data from 1996 and 2011.

The country's gross domestic product (GDP) increased two-and-a-half times over the period, from $136-billion to $402.2-billion.

Access to electricity increased by 25 percentage points so that, by 2011, more than 84% of homes had lights.

The number of people with access to piped water (be it in their homes or yards) went up by 12 percentage points, with 73.4% of the population having water access in 2011.

The percentage of the population that has flush or chemical toilets in their homes rose from 50.3% to 62.6% in the same period.

The report highlights a "key" area in which South Africa compares favourably with other Bric (Brazil, Russia, India and China) countries — its market capitalisation to GDP ratio.

This is higher than other countries highlighted for comparison, including the United States, Japan, Germany and its Bric partners.

And South Africa's "neighbourhood" has improved too. "In 1994, South Africa suffered from a ‘bad neighbourhood' syndrome, particularly highlighted by the political and economic state of Zimbabwe."

However, in the past 13 years, the region recorded a 5.6% average actual growth rate.

Goldman Sachs forecasts this to rise to 6.7% by 2050, which will make the region worth $14-trillion.

Positioned to benefit
Expansion like this will make sub-Saharan Africa one of the fastest-growing regions in the world.

"South Africa and its companies are now ideally positioned to benefit from the growth potential of the continent," the report said.

And there's a silver lining to South Africa's level of government indebtedness as well.

Gross gold and foreign exchange reserves are looking good too, having risen from $3-billion in 1994 to around $50-billion.

Nevertheless, there is room to accumulate further foreign exchange reserves, with South Africa's level considerably lower than the Asian average, the Latin American average and the emerging markets median.

But don't let that get you down. The average lending rate declined from about 17% between 1980 and 1994 to about 11% in the past five years, driving down the cost of capital.

And the JSE has shown solid relative growth. South Africa's current one-year forward price earnings multiple is 13.4, which surpasses Europe's 12.7 multiple and is just one behind the US's 14.4 multiple.

"It will be interesting to see if the historic [larger] multiple differential re-emerges in the future but, in the meantime, South African companies are at better comparative valuations on aggregate than they have been since 1994."

Living standards have shown "remarkable progression" and the African middle class more than doubled between 1993 and 2008.

The Sachs report said improvement is needed in 10 key areas, including unemployment, the current account deficit, infrastructure, labour instability, manufacturing, education and health and the level of savings in the country.

The effect of the report remains to be seen but one thing's for sure: the squid has got an eyeball on South Africa.