Why the JFK story can never really be put to bed 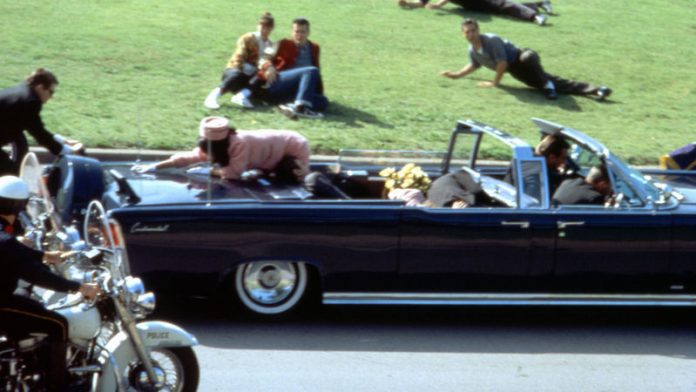 The enduring mystery surrounding John F Kennedy's assassination has drawn generations of writers, commentators and filmmakers, though some have been more successful than others.

The 50th anniversary of the killing of America's 35th president has inevitably renewed the spotlight on the events in Dallas on November 22 1963, even if the story has been recounted in innumerable films, TV series and books.

"JFK's life and death have been chronicled in myriad ways, and I would expect this to continue for generations to come," said Shaye Areheart, a publishing expert at New York's Columbia University.

"That he died so young, at the hands of an assassin, before he had a chance to spend more than a thousand days in office, also makes him an infinitely tragic and romantic figure."

His dashing charm, and notorious womanising, have also fuelled a veritable cultural industry built up around him.

But it was the manner of his death — allegedly at the hands of lone gunman Lee Harvey Oswald, shooting him dead as the presidential motorcade sped through a Dallas plaza — which produced the irresistible JFK myth.

"JFK and his untimely demise is probably one of the greatest unsolved mysteries of all-time, which is why the story can never really be put to bed, even 50 years later," said film expert Jeff Bock.

His life had "all the elements of a compelling Hollywood movie — high stakes, intrigue, infidelity and lots and lots of good-looking people", Bock, of box office tracker Exhibitor Relations, told Agence France-Presse.

US director Oliver Stone, whose film JFK starring Kevin Costner was a blockbuster hit, said the reason it continues to generate interest "is because it has never been truly solved".

The Warren Commission, the official inquiry into the killing, "is a myth at best", he told AFP.

"As a result people who are intelligent must question it and have repeatedly over 50 years. It has never been solved to a satisfactory degree without admitting the presence of a second gunman in front of Kennedy."

'The more you investigate, the more questions it produces'

Nelson McCormick, who made the TV movie Killing Kennedy for the National Geographic Channel, said the killing is "a murder case that the more you investigate it, the more questions it produces than answers".

"So as long as we feel the desire to keep looking for new clues, there will be new books, movies, TV and documentary shows on the many facets of this fascinating period of history," he said.

"It reminded me of the Titanic story. We know how it's going to end, and yet it is riveting to watch."

Stone, who came back to the Kennedy story in the TV documentary series The Untold History of the United States last year, said his 1991 film was clearly aimed at calling into question the official version of events.

"It was decided that Oswald was the guilty party and the evidence was made in order to fit that thesis," he said, adding: "It was a dramatic film and not a documentary.

"I had to combine characters and some of the plot situations to bring it down to a three-hour movie."

But Kennedy, however admired he was, is not a guarantee of success for storytellers, whether in writing or on screen.

"There are no sure bets in publishing or movies," said Professor Richard Walter, of the University of California, Los Angeles (UCLA) School of Theatre, Film, and Television.

"It's not enough for a book or a movie to be about JFK. It also has to be good. By good I mean engaging instead of boring," he said.

While Stone's JFK made $205-million globally, the film Parkland, released last month, made only $650 000 at the North American box office.

"Like anything else in Tinseltown, it often comes down to what kind of spin you're putting on the story and who the attached talent is," said Bock of Exhibitor Relations. "I'm not sure JFK is bankable per se."

The next big JFK hit could be an adaptation of Stephen King's novel 11-22-63 — the date he died — which was published in 2011 and describes a time travel attempt to prevent the assassination taking place.

Studio giant Warner Bros has bought the rights, and plans to make a TV series. The project "could do big business as it is an entirely different take on the events", said Bock.

"And that event in question, is undoubtedly one of the darkest times in America, and thus is sort of a wellspring of dark drama to tap into." – AFP