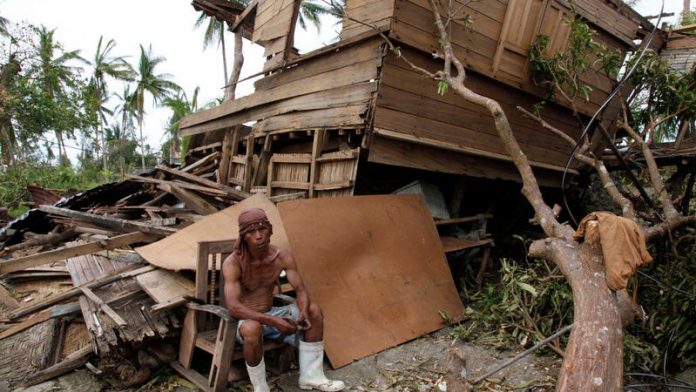 Typhoon Haiyan made landfall in the Philippines on Sunday, and the death toll is estimated at anywhere near 10 000. While it is impossible to link climate change to the typhoon straight away, the science of climate change predicts that warmer oceans will mean more extreme weather events.

Naderev Sano, the chief negotiator of the Philippines delegation, said their country was the victim of the slow progress on decreasing carbon emissions. "We cannot sit and stay helplessly stare at this international climate stalemate. It is not time to take action. We need an emergency climate pathway."

This year’s Congress of the Parties (COP) is the 19th iteration of a process that started with the first Earth Conference in Rio in 1992. It met in Durban two years ago, and its goal is to create a globally-binding agreement around climate change to force countries to lower their carbon emissions. If they do not, global warming will accelerate.

There are few expectations from this meeting – the path started in Durban aims to have an agreement by 2015, which is to start in 2020. Everyone has signed up in principle, but the next two meetings are there to thrash out the details of how this will be achieved and financed.

'Too slow'
But with the unfolding disaster, the Philippines delegation said this process was too slow. Haiyan made landfall at Sano's hometown. "I struggle to find words to describe how I feel about the losses and damages we have suffered from this cataclysm," he said. The disaster is the costliest in the country's history, and is the strongest typhoon to have made landfall in recorded history.

"Typhoons such as Haiyan and its impacts represent a sobering reminder to the international community that we cannot afford to procrastinate on climate action. Warsaw should muster the political will to address climate change, and raise ambition."

Human factor
The recently-released Intergovernmental Panel on Climate Change report, from the body that collates all the known science around climate change, concluded that it was "extremely likely" that humans were driving climate change.

Their emissions of greenhouse gases (mainly carbon dioxide) would change the current pattern of the world's climate systems, and increase the ferocity of extreme weather events. With more energy in the system, thanks to more solar radiation being trapped in the atmosphere, there would be more energy for destructive weather events.

The science shows that the majority of global warming is going into the oceans. Warmer oceans mean more energy for typhoons, hurricanes and tropical cyclones. This will make them bigger and more ferocious, although the frequency will decrease.

"What my country is going through as a result of this extreme climate event is madness. The climate madness is madness. We can stop this madness. Right here in Warsaw," said Sano.

With so little tangible progress at climate negotiations, he called for every country to be ambitious in reducing its carbon emissions, before irreversible climate change became a reality.

"We refuse, as a nation, to accept a future where super typhoons like Haiyan become a fact of life. We refuse to accept that running away from storms, evacuating our families, suffering the devastation and misery, having to count our dead, become a way of life. We simply refuse to."

A report by the UN Environment Programme, released on the eve of the Warsaw meeting, said that current pledges to lower carbon emissions still left the world locked into temperature increases over 1.5°C. The "Emissions Gap Report 2013" said pledges had to be increased to a further 12 gigatonnes of carbon by 2020.

Local climate change
When it comes to extreme weather events, South Africa can perhaps be considered lucky as there is little chance of the mega-events that kill tens of thousands of people. Climate change is creeping and will have its biggest impact in rainfall and water availability. Most of the country will get drier, with just the north-east getting wetter.

The interior is projected to be up to 6°C warmer by the middle of this century, with the coastal areas 2°C warmer. In the Western Cape, the winter rainfall will fade away, and the deserts of the Northern Cape will head south.

Nationally, rain will fall more sporadically and in heavier bouts – which is a problem because there are so few dams that it will run away into the sea. South Africa is already the world's 31st driest country and by 2030 demand for water is predicted to exceed supply by 17% – even without climate change.