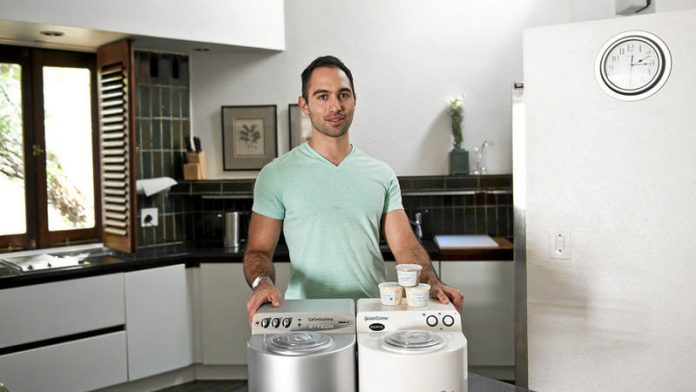 There's a stuffed wild dog, now a ­little moth-eaten, peering out on to the parking area outside the home in Saxonwold, Johannesburg, of ice cream-maker Paul Ballen.

"If you know my father [the photographer Roger Ballen, well known for his macabre aesthetic] … you'd understand," he says.

Paul Ballen is surprisingly slim for a maker of extraordinary ice cream. He only tastes a teaspoon at a time, sticks to the palaeo diet, and does weightlifting at the gym at the University of the Witwatersrand, where he is in his final year of a post-graduate degree in management at the business school.

Ballen started making ice cream in 2010 when his mother bought him a machine (a Krups model that made a litre at a time and that you had to put in the fridge) for his 21st birthday.

While this machine was enough to get him started (and experimenting with textures and tastes), if the kitchen was too warm, it would not work properly.

He now has three Gelatissimo machines and has burnt out a few motors. The Gelatissimo is made by the Nemox company, costs about R7 000, and churns out 1.5 litres every 40 minutes. Anything bigger and the price rises sharply: a machine that will make five litres costs R60 000.

You can only buy Paul's Homemade Ice Cream at five places in Johannesburg – Warm & Glad in Craighall Park, Wolves Café and the Good Luck Club in Illovo, the Love Food Café in Braamfontein and at Croft & Co in Parkview.

Ballen says he approached the businesses himself, partly because he liked them and partly because they are close to his home in Saxonwold or the university, so he can make deliveries with a cooler box packed with ice. He "churns" on Saturday, and does all the preparation beforehand.

Ballen prefers to use double-thick cream in his products. The cream, along with egg yolks, milk and sugar, is heated carefully to make a custard, which is then cooled and churned.

He shows me into the spotless kitchen and at first I think the whirring sound is ice cream being churned, but it is only the washing machine. At my urging, he starts the Gelatissimo and pours in a litre of the custard, in preparation for a batch of honeycomb ice cream.

Part of the appeal of his ice cream is the flavours – white chocolate and green tea, peanut butter, rooibos and caramel, hazelnut and Nutella, and cereal milk. He has also been experimenting with a "White Russian" – Kahlúa with vodka.

For a cinammon toast flavour, Ballen melts sugar and pours this with butter and cinnamon on to squares of white bread. He toasts this in the oven and then adds it to the custard as it is churning.

It is worth following him on Twitter (@Paul_Ballen), where he tweets pictures of new batches, and when he makes his deliveries.

Meanwhile, the motor of the Gelatissimo is beginning to strain as the ice cream chills and becomes more viscous.

Ballen bashes what he calls the honeycomb – a confection of sugar, honey and bicarbonate of soda – with the point of a rolling pin, and folds it into the ice cream.

You can feel the heat coming off the machine now, the blade cutting through the pale-yellow sugary mass.

Any thought of a takeaway is dashed as Ballen scoops most of it into a litre container and stashes it in the deep freeze.

He leaves a little for us to taste, which renders me almost speechless. It is milky, smooth and soft, with a little crunch from the honeycomb, though not too sweet.

"Anything can be sweet. McDonald's is so popular because they put sugar in their burgers and fries," he says.

A big scoop for African indulgence

Sandwiched in the north