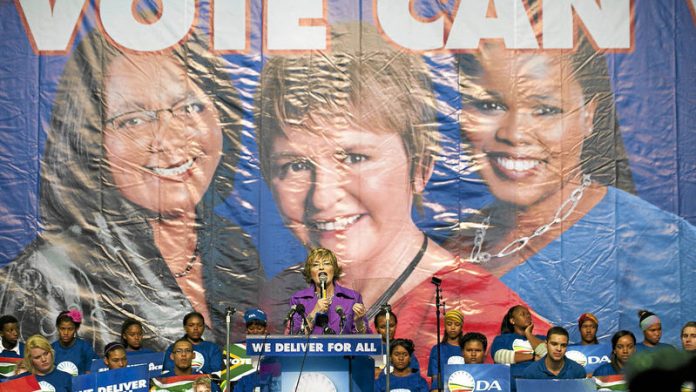 Black leaders in the Democratic Alliance, dubbed the black caucus, will face off against the old guard at next week's policy conference in a battle over the opposition party's affirmative action stance.

The DA's policy on affirmative action has raised unhappiness within the party and there is a fear that the official opposition risks being discredited among black voters just months before next year's poll.

A group of the party's senior black leaders will question the DA's direction on affirmative action, black economic empowerment and similar policies.

This follows the party's U-turn on the Broad-based Black Economic Empowerment Amendment Bill, withdrawing its support for it in Parliament earlier this month. 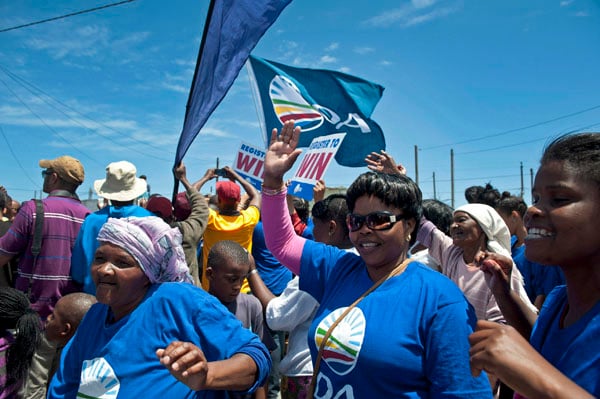 The economic benefits of the free market do not have the clear appeal of the ANC's black empowerment policies. (David Harrison, M&G)

The party plans to do the same with the Employment Equity Amendment Bill, which seeks to

regulate demographic representivity in the workplace, when it is debated in the National Council of Provinces on November 21.

Over the years, the DA has had to explain and justify its affirmative action and redress policies, advocating instead "equal opportunity". It is a hard sell to black people who are drawn to the ruling party's policies, which are seen as creating an environment that favours the previously disadvantaged and enables them to play a meaningful role in the economy.

Confusing voters
Seven black public representatives, including MPs, MPLs, councillors and a staff member, told the Mail & Guardian this week that they will use the platform to raise their unease about the party's approach to affirmative action, which they say is confusing voters.

DA deputy chairperson Makashule Gana, who is also a Johannesburg councillor, is among those who will be calling for change.

"You don't wake up and change the principles of a party. But policy must be debated; it is not cast in stone.

"As much as policy is informed by principles, it must be made to address the issues faced by the country," he said.

"We should ask: Is this policy still relevant to this challenge? Will it address the challenge?

"Our policies must be about making the lives of our people much better," Gana said. "My eye of the needle for any policy is for the policy to improve lives."

Some black leaders did not want to go into detail about their views, saying they would rather voice them at the conference on the weekend of November 23 and 24.

Redress
They also want clarity from party leader Helen Zille about her recent newsletter, in which she said the DA would withdraw its support for the Bills.

"If we are to be taken seriously, especially by the black voters that we are trying to appeal to, we need to be clear on these policies," an MP who did not want to be named said.

Another DA leader who requested anonymity said black DA leaders were uncomfortable with the party's position on black empowerment. The leader said the party needs to be unambiguous about such policies, although the old guard felt, if the DA failed to qualify its support for the Bills, there would be a problem.

"It doesn't seem credible when we have to sell it. You can't say to people, we support it but … ," the leader said. 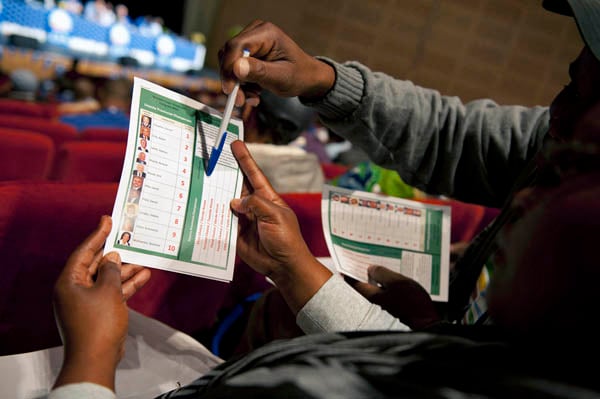 DA youth leader Mbali Ntuli said she would be asking the party to look at a policy that will not only seek to redress the past but will also make sure that future generations are protected.

"I'm going to push for a policy that will make sure all young people are included. In fact, I will present a youth, third-way alternative to take the issue forward," she said.

But not all black leaders seem unhappy with the party's stance. The DA KwaZulu-Natal leader, Sizwe Mchunu, said the party was doing well on redress, reconciliation and diversity.

"From where I stand, I'm very comfortable. I wouldn't say there's unhappiness in the province that I lead or anywhere else in the party."

United position
Mchunu said the DA consulted widely and its policies were crafted within the broader philosophy of an open opportunity society.

Zille acknowledged that the party had bungled the way it dealt with the Employment Equity Amendment Bill and that that had led to debate and tension. "But that does not imply the DA is divided on policy issues and certainly not on principle," she said.

"I have no doubt these issues will come up next weekend because we are going to be debating policy. And I am also convinced we will come out with a united position."

The M&G understands that the black caucus occasionally meets to share views on what direction the party should take, especially on issues to do with empowering black people inside and outside the DA.

Several of these leaders said that Zille's newsletter has further muddied the DA position on affirmative action, which has always seemed ambiguous.

"I was very confused by her views in the newsletter. And we can't be confused, as these two Bills are the most important to the black people we are targeting," one said.

Zille agreed that policy change is "often natural and necessary", but said the party rejected the Employment Equity Amendment Bill because "there is nothing progressive about coercion that enforces racial quotas determined by unelected officials. It is Verwoerdian social engineering.

"This has never been and will never be the DA's philosophy, and I do not believe that anyone in the DA supports this approach."

Nonracial
Former DA leader Tony Leon, one of the opponents of the DA's earlier support for the Employment Equity Amendment Bill, told the M&G this week: "If they [MPs such as Sej Motau, who is believed to support race-based policies] disagree, we have a problem."

Leon said the DA has to stand up for a nonracial way of doing things, otherwise "we may have to ask what the party is about. Then you really have two versions of the DA contending for power."

Leon said, if it was up to him, he would dump every racially based piece of legislation as they get in the way of economic growth and employment.

He said he is not being insensitive about the past, but the antidote to it is nonracialism. 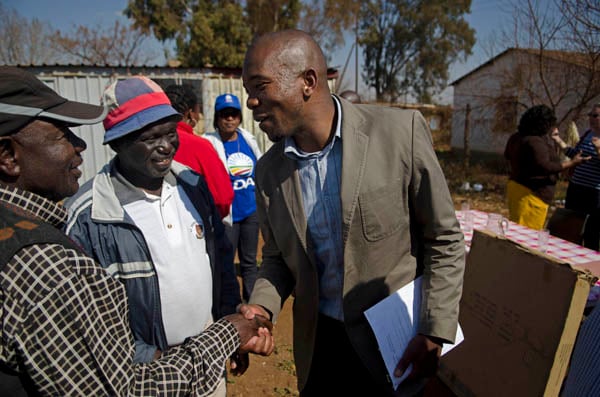 The relaxed Mmusi Maimane is seen as the man to sell the DA's approach to redress. (Skyler Reid, M&G)

"What we do support are incentives that can be set down in codes of good practice to facilitate greater diversity in the workplace, ensuring training, job creation [and] supporting new businesses," she said, referring to the party's campaign slogan: "The DA supports broad-based black economic empowerment that creates jobs, not a few billionaires."

A DA parliamentary insider said that, although Zille tries her best to steer the party in a favourable and credible direction, she meets resistance from the old guard.

"There's a group of older conservatives that is still powerful in the DA. Just like the people who are still in charge of the ANC are the former exiles," the source said.

"The difference about this group is that they're of the view that ‘we are part of this nonracial society because we don't have a choice – but it's our interests first and then they [blacks] will follow'."

Disadvantaging
The source said this group of largely experienced members of the parties that merged to form the DA – the New National Party, Federal Alliance and Democratic Party – are afraid that the young black professionals who are rising up the ranks could take over.

"Helen's foresight says, if we don't include them [blacks], we're in danger of disadvantaging the DA. They become the safety net for us.

"Her view is, let's get many of them in so that it becomes difficult to keep referring to the DA as a white party."

The DA has often been accused of only including black people for its own benefit.

But Zille is said to be personally reluctant to implement policies that might threaten her political position.

"She's not even sure yet that she's been received by the black voters. She doesn't want to lose her traditional base in the process," the insider said.

"Helen knows what must be done but she must be tactical. She wants to win the black vote first, then she can say we need to change this policy and that one.

"The problem in the DA is that, because the term of office is so short you can't mess up, so Helen is trying to manage this thing to consolidate her base."

Calm voters
Gana said he has not seen and does not know of any resistance to what Zille is trying to achieve.

"It would, however, not be surprising. Change is difficult and people deal with change, regardless of the nature, differently," he said.

Those who fear the employment equity debacle will harm the party on the eve of elections are already planning ways to calm voters, suggesting that national spokesperson Mmusi Maimane should be assigned to regain public confidence.

"The best person to deal with this issue is Mmusi," said an insider familiar with the party's Parliamentary network. "He's the type that can go to Alexandra in his sneakers and talk to the people and he will be listened to."