No meals are ‘serious setback’ for hungry pupils 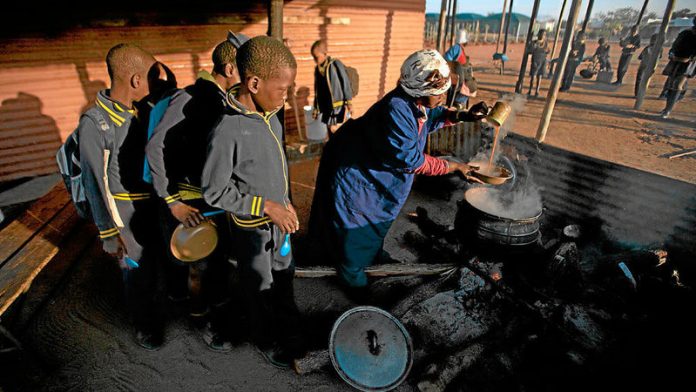 'It's not good to be taught hungry. It's better for concentration if we get food," grade 11 pupil Khuliso Sebokwane told the Mail & Guardian this week.

This is why the government decided 17 years ago to introduce the national school nutrition programme, which gives the neediest 60% of pupils one free meal a day.

But some of the nine million pupils who are supposed to get this meal, which includes a starch such as samp, maize pap, rice or potatoes, a fresh vegetable, and a protein such as pilchards or soya, are not so lucky.

School feeding schemes have proven notoriously vulnerable to corruption because middlemen are contracted to provide the meals, and sometimes their relationship with their employers appears to be worth more than their competence.

On Monday, rights organisation Section27 announced that school meals had not been delivered to 11 schools in the Vhembe district of Limpopo for two months.

This left thousands of pupils hungry, some of whom relied on the meal as their only one for the day.

Leaving school early
The principal at one of the schools said pupils left school early to go home because they were hungry.

"Some pupils leave school at break, and when they come back in the morning, you ask them why and they say they were hungry," she said, asking to remain anonymous.

It also asked for an audit of meal delivery at all 11 schools.

Swift action from the basic education department followed. By Wednesday, it had agreed to provide the meals and do the audit.

Pupils had gone hungry, it said, because there were "procurement and administrative issues … in appointing a new service provider to replace the one whose contract had come to an end".

Section27 then removed its case from the roll.

Meals start again
But although happy reports began to trickle in that the schools had started receiving their food, some principals were assessing the damage already done.

"This has been a serious setback," a principal said. His school had had to shorten the normal school day because pupils were so hungry "they did not want to study anymore".

"We couldn't have afternoon study sessions anymore because the day would be too long, and we rely on those afternoon studies for teachers to do extra lessons for revision and such," he said.

Food had arrived at his school on Tuesday, but he was still anxious. He did not know whether the food would keep coming. "Now that it has happened before, we are nervous."

In the past decade, there have been numerous cases of bungled school meals.

Delivery of rotten food, corrupt contracts, meals as nutritious as cardboard, and a shortage of cooking equipment have scarred the school feeding-scheme landscape.

In the Western Cape last year, because of a change in service provider, hundreds of pupils in the Cape Town area were, for weeks, fed only a fraction of what they once got, if they got their meals at all.

Just two years ago, there were no meals at all for any Eastern Cape children when the feeding scheme was temporarily suspended, along with pupil transport.

The provincial education department changed tack, cut out the middlemen and decided to give funds directly to schools to arrange their own meals – an arrangement that has proved generally successful.

Thousands went hungry
The M&G reported last year that a R1.7-million school feeding programme in Limpopo run by people close to Julius Malema ("Delivery of food a hit-and-miss affair", October 26 2012) had resulted in thousands of pupils not getting their meals.

The incidents of pupils missing out on meals were not isolated to certain provinces, said Mugwena Maluleke, the general secretary of the South African Democratic Teachers' Union. "We get reports from every province of the problem."

Corruption "was the undoing of many of these schemes", he said. "In provinces where the procurement of meals is decentralised, there is a reduction in corruption, but elsewhere, corruption dominates."

But Elijah Mhlanga, the spokesperson for the basic education department, said: "There is no evidence that suggests that feeding schemes are particularly vulnerable to corruption – not that we know of anyway."

He said the programme was "generally successful nationwide", but there had been problems with "the quality of foodstuff supplied by service providers" and "the lack of food preparation and storage facilities at some schools".

Yet, the programme had grown since 2004 from providing four million meals a day to more than nine million now, Mhlanga said.

Its budget had increased from R832-million to about R5-billion over the same period.