Touch-and-go breast tech is no substitute for mammograms

"I was 16 when my mom died of breast cancer," says 28-year-old Monique Minnaar*. "Cancer is everywhere in my life so I went to get my genes tested."

She learnt that she has a genetic mutation, the BRCA gene, which increases her risk of developing breast cancer during her lifetime by up to 90%.

"My mom died of breast cancer when she was 37 because it was detected too late, so I'm always looking for new and different ways that I can protect myself," she says.

"So naturally I was really excited when I received an email advertisement for a safe, painless alternative to mammograms. I have heard all the stories of how painful and uncomfortable mammograms are so I thought, wow, I can get this instead – it's painless and even cheap."

One of Minnaar's friends who also received the email advertising the piece of equipment called SureTouch, David Wesson*, says his first reaction was: "That's brilliant – this must be a great thing. [But] I started doing a bit of research and I found out this wasn't an alternative to mammograms."

Wesson called the number listed on the email to confront the Natural Medicine Clinic in Claremont, Cape Town, about the misinformation.

"I called and asked for the person in charge, which turned out to be Dr Neil Burman. I asked why he was advertising something that isn't the case and he said the language in that email is a mistake. It's in big bright letters – the biggest wording in the entire advert – how can that be a mistake?" 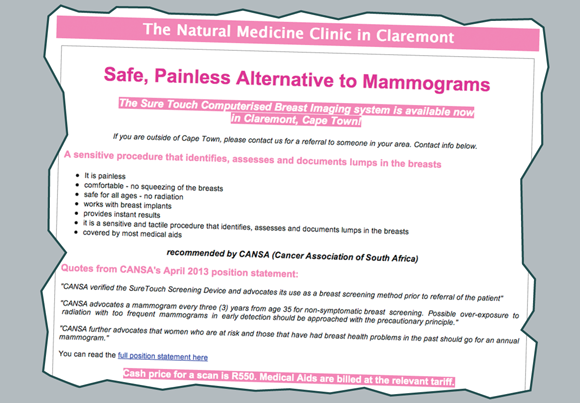 Like an electric toothbrush
The SureTouch device uses a relatively new technology called "tactile imaging", which measures the elasticity of breast tissue. A healthcare worker slides a device, the SureTouch sensor, over the breast and underarm.

Breast surgeon Carol-Ann Benn says one can think of it in terms of "an electric toothbrush".

"A manual toothbrush should technically do the job as well as an electrical one, but invariably people don't brush for long enough. SureTouch is like an electric toothbrush – if it is used properly it can improve the efficacy of a clinical breast exam [a physical examination performed by a qualified healthcare worker where the breast is manually felt by hand for abnormalities]."

But Benn is quick to add that "SureTouch is definitely not an alternative to mammograms".

"Mammograms are still the gold standard of breast screening. SureTouch is nice to have, but it's not a have-to-have," she says.

According to the president of the Breast Interest Group of Southern Africa, Justus Apffelstaedt: "The only form of screening for breast cancer that have been scientifically proven are ultrasound, mammograms and magnetic resonance imaging. Anything else is quackery.

"The danger of this product is that it only promises to enhance physical examination – it cannot actually detect cancers. Women who go for this as an alternative to a mammogram get sent away with the impression that they are fine. Then when they do realise something is wrong, they present late, which largely reduces their chances of survival."

'Fills a gap'
Alan Maguire, who imports the device into the country through the Johannesburg-based company Medical Tactile Imaging, claims the technology "fills a gap" for women younger than 40 who don't usually qualify for mammograms.

"It works in a similar way to how a doctor feels for lumps in the breast, but it has 192 sensors and is four times more sensitive than human touch. It then forms a computerised 3D image of the breast," he says.

According to Maguire, there are seven SureTouch machines in the country – he sells the machines for about R300 000 each.

Maguire trains medical personnel on how to use the device, assesses them, and presents those who qualify with a certificate.

"The advantage is there is no radiation, but I make it very clear it is not an alternative to mammograms – it's a pre screening test not proven for cancer diagnosis."

He says that many people refuse to go for mammograms because of the radiation risks associated with x-rays. "For those women, this is at least something."

Corrected email not sent
He says that he was made aware of the clinic's claims in the email advertisement and rewrote the content so it could be resent.

"I paid the man from the public relations company who was in charge of these emails to send a disclaimer to all the people who received that first email, but it never got sent," he says.

Neither Minnaar nor Wesson received the amended email.

When Burman was confronted about this by the Mail & Guardian, he claimed he was not aware that the rewritten email had not been sent to the original mailing list.

An M&G reporter, however, called the clinic posing as a patient booking a breast-screening appointment. The receptionist confidently announced that SureTouch is indeed "an alternative to a mammogram and it is just as accurate".

When the same reporter phoned and identified herself as a journalist, the response changed. The same receptionist said: "I don't think it can replace a mammogram, but it's definitely 100% accurate."

Burman denied that his office assistants "referred to SureTouch as an alternative to mammography". He said that, when this issue was initially raised, he gave his staff "strict instructions" not to use the word "alternative".

"It is a matter of semantics whether you call it a pre screening or an alternative – but we don't use that word."

The risks associated with radiation
Burman said people need alternative pre screening options, "given the harms or concerns raised worldwide about screening the healthy with an x-ray mammogram".

Most experts, however, believe the potential harm caused by exposure to radiation during a mammogram is minimal.

"The dose from a mammogram or chest x-ray is significantly less than a patient would get out of the atmosphere in a year," says Richard Tuft from the Radiological Society of South Africa.

Cansa criticised
Tuft and other experts have accused the Cancer Association of South Africa (Cansa) of not being forthright enough on its position on the SureTouch technology. Cansa has bought two SureTouch machines, which are kept in its mobile cancer screening vans.

In the organisation's position statement on breast cancer, an introductory page is followed by almost three pages about SureTouch, which includes a small comment at the end clarifying that it is not an alternative to mammograms. Only after this is there a short 15-line paragraph about mammography and ultrasounds.

"I understand that Cansa says it isn't an alternative at the end, but the whole emphasis is misleading. A lay person going into their website and seeing three pages of this and virtually nothing on a mammogram will get the wrong impression," says Tuft.

According to Cansa's Michael Herbst, the organisation uses the device, which is in two of their nine mobile units, to go into rural and outlying areas to screen people who otherwise probably would not get screened at all.

"The advantage with SureTouch is that it is more sensitive than a normal physical breast examination, but it also gives you a permanent record of what has been found. It stores this information on the computer program and gives you a print-out that clearly indicates where the problem is located."

He says this is a more effective way of recording patient data, compared with a healthcare worker's notes, for referral purposes. Cansa only uses the device in rural areas where mammograms aren't available.

Repeating history?
But Tuft says SureTouch poses dangers similar to other less effective breast screening technologies. "Our concern is that, and we have seen numerous examples with thermo-graphy [another screening option that?detects abnormalities through using infared technology], even advanced cancers are not detected and treatment is delayed as the patients have been reassured that there is no problem. The same concerns apply to SureTouch."

Cape Town breast surgeon Jenny Edge has experienced this concern in her own practice.

"I had a patient referred to me after an examination with the SureTouch, which found something suspicious in her left breast," she says. "When the women got to me her left breast was fine; it was in fact her right breast that had cancer."

Although Burman claims to have corrected misinformation on the matter, Tuft does not believe he gives his patients an accurate impression.

"Our concern is that when we put him under pressure he toes the line, but I think he misinforms patients.

"What he is doing is potentially dangerous. Unless he is prepared to clearly indicate to his patients that SureTouch has limited value and cannot replace mammography, the Radiological Society of South Africa will make a formal complaint to the Health Professions Council."

Should Burman be called before the council, it would not be the first time. He was found guilty in 1993 of three different charges relating to over-servicing patients (giving more tests than they required) as well as manipulating tariffs, for which he paid three fines of R10 000 each.

'Off my head with outrage'
"I'm off my head with outrage at the [number] of people who make money off the breast cancer business," says Wesson, who has undergone a mammogram himself. "This is more than just irresponsible advertising – people will see it as an alternative, go for it, and may even die."

For Minnaar, whose genes say she will probably develop breast cancer one day, these "semantics" are literally a matter of life and death.

"If I was a normal person and didn't do any research, I would have just gone and got that scan and would have never wanted to go for a mammogram," she says. "With me being a high-risk candidate already, that thing wouldn't have necessarily caught any lumps.

"Cancer is a very sensitive and emotional topic – I don't even know whether or not I will have children because I don't want to pass on this gene. I'm also preparing myself for a double mastectomy [removal of both breasts] in the future. I would have felt very guilty if I forwarded this email on to someone and they went for it and there was something wrong. It's just a bit scary – the implications that this mistake in wording could have."

*Names have been changed 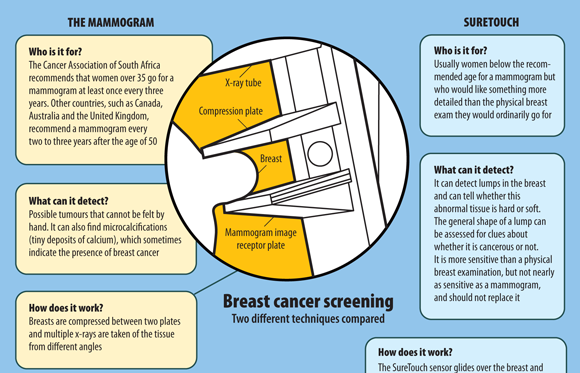 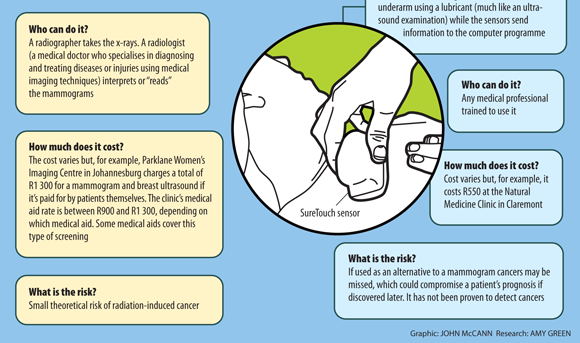