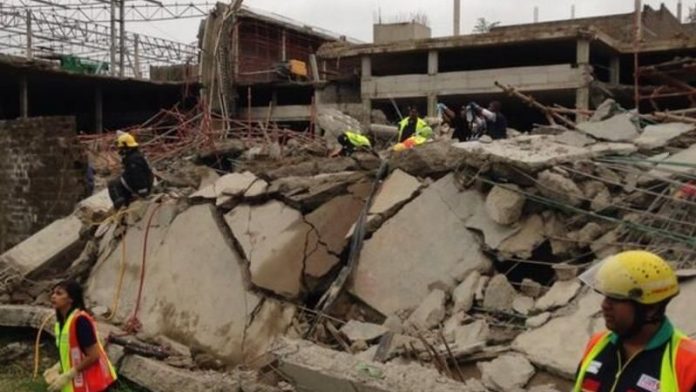 One death and 29 injuries have been reported so far, after a roof collapse on Tuesday at a shopping mall north of Durban.

Netcare 911 spokesperson Chris Botha said 29 people were taken to hospital and that emergency workers were searching for another 50 feared trapped under the rubble.

Captain Thulani Zwane said one person had died and 17 were injured. The shopping mall was under construction when a roofing level collapsed on workers.

Botha said earlier that roads surrounding the construction site had been closed.

A Sapa reporter on the scene said about a hundred onlookers were standing at the edge of the cordoned off construction site.

Scores of police and search and rescue officials were on the scene, sifting through the rubble under big spotlights.

Trains passing the mall had to slow right down as people were cleared from the railway line that borders the mall.

'Traumatic'
Fiona Moonean, whose house is located directly across the railway from the collapsed level of the mall said she was washing dishes at the time of the incident.

She said that a few days earlier, workers had started removing the scaffolding supporting the level.

"Just after 4.30pm it was a thunderous sound. Before the bang, I heard too much scaffolding fall. That's when I picked my eyes up [and looked through her window at the mall]. The whole concrete slab crashed down with the pillars. The smoke and dust was too thick. I heard them screaming out for help in Zulu."

She called the emergency services and a woman took down her details.

"She had to calm me down because I was so freaked out. For me, the most traumatic is the sound of the guys' voices. That is the part that plays in my head," she said. – Sapa

Slice of life: The powers of crocodile meat