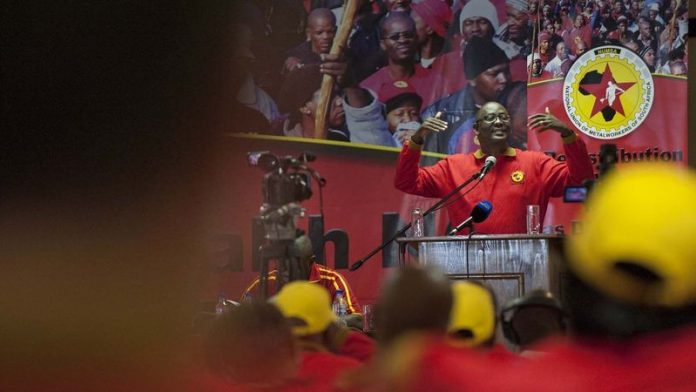 Arguments for the reinstatement of Zwelinzima Vavi, the suspended general secretary of trade union federation Cosatu, suffered a blow this week after supporters of the organisation’s president, Sdumo Dlamini, won almost all the debates at its central executive committee meeting.

Dlamini’s supporters are hoping a forensic audit on the sale of the old Cosatu building and the purchase of a new one – expected to be released in two weeks – will find against Vavi before the special congress scheduled for next year.

Vavi has repeatedly denied all allegations against him, including those of financial mismanagement.

The National Union of Metalworkers of South Africa (Numsa), which has been Vavi’s most vocal supporter, emerged bruised from the meeting at which it was told to respect the office of the Cosatu president and that the special national congress that it had been agitating for with eight other unions will not be held this year.

The central executive committee also found that two unions pushing for the congress are not in good standing with the federation. Numsa was also accused of paying other unions’ subscription fees in return for their support to reinstate Vavi.

On November 21, Dlamini told the media after the three-day meeting that Numsa is also being investigated for plotting to disrupt Cosatu meetings in the provinces. In the past few weeks Dlamini and other Cosatu leaders from his faction were booed by members in KwaZulu-Natal, Limpopo, Gauteng and the Eastern Cape.

The decision to launch a probe into Numsa came after five unions – including the National Union of Mineworkers, the South African Democratic Teachers’ Union and the Chemical, Energy, Paper, Printing, Wood and Allied Workers’ Union – tabled a motion in the central executive committee to have Numsa expelled from the federation.

“The president reported on the practicalities of convening such a congress, including the objectives and agenda of the congress. The last point was relevant, as the seven affiliates had not given the same reasons for their request for a special congress,” said Ntshalintshali.

Dlamini said that “it’s not the president who fears to convene a special conference”, but that a number of issues have to be resolved before it can be held.

Cosatu’s second deputy president, Zingiswa Losi, added that the federation does not have the funding for the congress and has not budgeted for it.

Meanwhile, divisions in Cosatu have forced the federation to withhold its funding for the ANC’s elections campaign. Cosatu has budgeted R8-million for this purpose, according to the treasurer’s report.

Vavi’s supporters have questioned why the federation is contributing towards the campaign while being unable to fund its own special congress. Dlamini said the federation is yet to take a decision on funding the ANC as it heads into the 2014 polls.