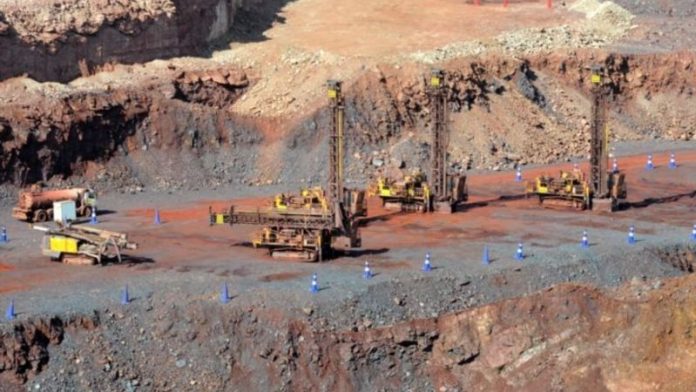 Gold, iron ore, soybean and copper prices will probably fall by at least 15% next year as commodities face increased downside risks even as economic growth in the US accelerates, according to Goldman Sachs Group.

The risks are strongest for iron ore and follow increases in supplies, analysts including Jeffrey Currie wrote in a report on Wednesday that identified the New York-based bank’s top 10 market themes for the coming year. Price pressures will mostly become visible later in 2014, the analysts wrote, forecasting that bullion, copper and soybeans will decline to the lowest levels since 2010.

Commodities tracked by Standard & Poor's GSCI Index were down by 5.2% this year, led by corn as supplies surged, and precious metals on expectations that the Federal Reserve will taper stimulus. Goldman described the forecast losses for iron ore, gold, soybeans and copper as significant, and said they could help weaken currencies in producing countries, including the Australian dollar and South African rand.

"Last year, we pointed to the ongoing shift in our commodity views, ultimately towards downside price risk," the analysts wrote. "The impact of supply responses to the period of extraordinary price pressure continues to flow through the system."

Gold heads for a fall
Gold, which was at $1 246.30 an ounce on the Comex at 2:05 pm in Singapore, will drop by $1 050 at the end of next year, Goldman said in the report, restating an earlier forecast. Currie said last month that gold is a "slam dunk" sell for next year as the US economy extends its recovery.

Bullion is headed for the first decrease since 2000 this year as investors cut holdings. Futures lost as much as 2.6% on Wednesday after the Federal Reserve signalled that tapering may start in the months ahead, according to minutes from its October meeting.

A global seaborne iron ore surplus will emerge next year as supply increases over the second and third quarters, Goldman Sachs said in a separate report last month. Prices will average $108 a tonne in 2014, it said in the October 18 note. The raw material averaged $135 a tonne this year at Tianjin port in China.

Energy outlook
Downside risks for energy prices will increase next year, but the outlook is more stable than for iron ore, gold and copper, Goldman said in Wednesday's report. Brent crude oil is seen at $105 a barrel at the end of 2014 from $107.76 on Thursday.

"We expect the long-awaited shift towards above-trend growth in the US finally to occur, spurred by an acceleration in private consumption and business investment," the Goldman analysts wrote. At the Federal Reserve, "we expect a gradual tapering in bond purchases to begin, most likely in March".

The US economy may expand by 2.6% in 2014 from 1.7% growth this year, according to the median of analysts' estimates compiled by Bloomberg. Retail sales rose in October by the most in three months, data showed on Wednesday.

In China, the largest consumer of everything from iron ore to copper, economic growth is seen as stable this year after a slowdown in mid-2013 reversed, Goldman said. The preliminary reading released on Thursday of a Chinese Purchasing Managers' Index for November was 50.4, the first decline in four months for the gauge from HSBC Holdings and Markit Economics. – Bloomberg