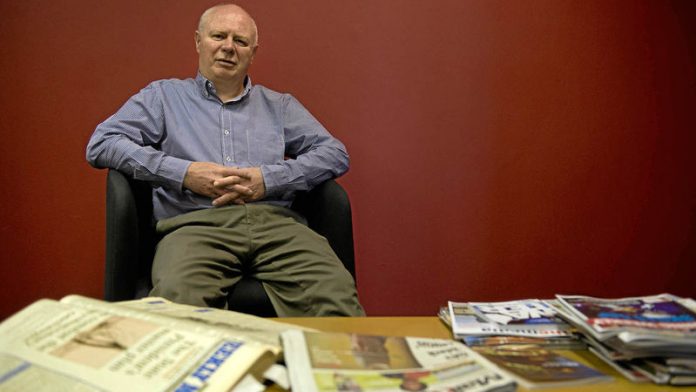 Irwin Manoim was the invisible editor. He was – and remains – a man of few words. He kept a low profile. Few people knew about him. But he was the quiet, behind-the-scenes pioneer of the alternative press of the late apartheid era, driving innovation that made these papers possible and allowed the penniless little Weekly Mail to become the substantial, international, digital Mail & Guardian.

Most people know about the paper as an outspoken little publication that took on censorship and apartheid in the 1980s with the bravado you can only have when you are young. But fewer know that the foundation of this venture was technical innovation, which brought to life a group of newspapers that flourished throughout the region in the 1980s: the New Nation in Johannesburg, South in Cape Town, New African in KwaZulu-Natal, the Namibian in Windhoek and the Post in Zambia, all of which played a part in the democratisation of these countries.

What was required at the time was a cheap way of typesetting news­papers, and machinery that could be put into the back of a car and moved quickly when the security police arrived. And then you need the creativity to turn this into interesting, professional-looking newspapers, a leap from the scrappy opposition newsletters of the time.

The person who put this together was Manoim.

His taste for alternative news­papers started at Wits Student, the campus newspaper of the time. He was editor in the crucial year of 1976.

"In those days, when censorship and general conservatism was such that we had absolutely no idea what was going on in the rest of the world and no exposure at all to alternative ideas, the student press brought all sorts of ideas that were completely unheard, like maybe it is a good idea to legalise dagga, or the case for a democratic South Africa, or articles about feminism," he said in an interview this week.

Oppression and struggle
"I think there were even articles about gay rights, none of which would have made it anywhere near any other South African publication."

That led to the launch of Saspu National (Saspu stands for the South African Students' Press Union). "It primarily circulated off-campus rather than on-campus and was a predecessor to the alternative press in many ways as it was largely about the politics of oppression and struggle."

Manoim was then working on the Sunday Express, but "they brought in some professional journalists like me to put it together, to help them, to teach them how to write headlines, lay out pages, take photos. We used to do it late into the night, fuelled by Tassies wine."

It was also the first experiment in alternative typesetting.

"Because they could not risk putting the material through a commercial typesetter, they brought in some engineering students who put together the software and hardware to connect the old-fashioned, pre-PC student computers to typesetting machines.

"I printed my master's thesis [at the University of the Witwatersrand, about the black press] on that system, and I think it was the first example of desktop publishing of a book."

But the machinery was still bulky and expensive, requiring chemicals and darkrooms. "So when we moved to laser printing, that made it all much cheaper. And you could pick it up, put it into the back of a car and make it disappear."

The Weekly Mail brought the first laser printer into the country in 1985 and hooked it up with the first-generation Apple Macs – probably the first newspaper in the world to be produced on desktop technology.

Manoim then helped to set up the systems at New Nation, South and the Namibian. When Fred M'membe wanted to start the Post in Zambia, he came to visit and went home with Weekly Mail systems and templates on a disc.

The system was so flexible that, after an attack on the New Nation, "they made a principle of always taking all the computers and printers every night and locking them in the safe".

They were heady days. "There is nothing quite like being in your late 20s and suddenly having freedom of the press, being able to do pretty much what you wanted without having somebody 10 years older saying you can't do this. We were editor/owners and nobody told us what to do.

"People worked through the night, for little or no money, but it was felt in the circumstances of the time that this was something that deserved passion and commitment."

Manoim was responsible for the distinctive design of the paper.

"It had to do with being a tabloid, which was the only size paper we could print. There were not many tabloids at the time and they were all considered tacky knock 'n drops. We needed to signal that this was a tabloid that was sophisticated and wanted to appeal to people who had some political understanding and also a sense of irony.

Alternative papers
"The paper was taken seriously because it was seen to be independent. Other alternative papers of the time quite overtly said ‘we are struggle newspapers and we write our articles in support of the struggle'.

"But it was a key principle for us that we sometimes said things regardless of how uncomfortable it made people feel. So we were frequently criti­cised by the left of the time for putting journalism before anything else."

Manoim – with Bruce Cohen, another unsung pioneer – led the paper into the online era, first with an email edition and then on to the web. "We were the first in Africa on the web and there were probably not more than a dozen others around the world at that time.

"For a number of years we had more readers online than all the other [South African] newspapers added together and that start has helped the paper to its present position where it is still regarded as an innovator in the online field."

Manoim left the paper several years ago and now runs an internet publishing company, Big Media. Among other things, it runs Mam­poer Shorts, which publishes long pieces of journalism in short e-books (www.mampoer.co.za).

He looks at the paper now with affectionate bemusement. "The irony is that everyone expected, when the ANC came into power, it would become a government paper and the others papers would be oppositional. In fact, the M&G stayed a critical oppositional paper."

Yet it is different. "The Weekly Mail was a very tacky and cheap newspaper. It always looked slightly shabby, whereas the M&G now is a very large, sophisticated paper, very well printed – it looks mainstream."

Anton Harber, Caxton professor of journalism at the University of the Witwatersrand, was founding co-editor with Irwin Manoim of the Weekly Mail in 1985. Manoim was awarded the honorary degree by Wits