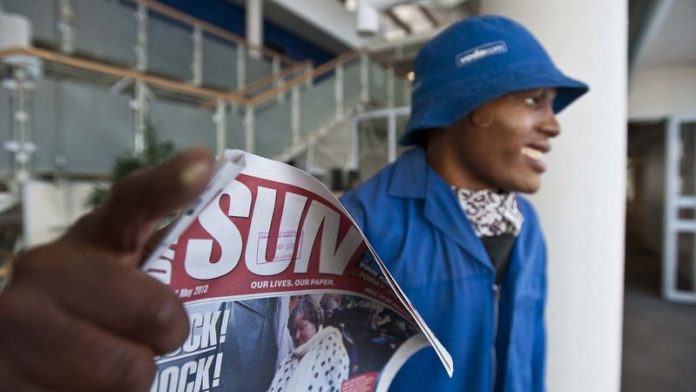 The Daily Sun must publish a front page apology for the publication of two graphic photographs of corpses, press ombudsman Johan Retief has ruled.

In a ruling on Wednesday, Retief ordered the newspaper to publish the apology on half of its front page.

This was after the government communication and information system, the co-operative governance department, and others complained about the front page photographs published above the fold on October 29 and November 6.

The colour photos were of the corpses of people killed in mob justice attacks.

According to the complainants, the pictures were insensitive, dehumanising, inconsiderate, caused discomfort to society and lacked compassion.

There were also concerns that the pictures exposed society, including children, to extreme violence and desensitised people to violent crimes.

'Made of the horror'
"Some complainants add that such graphic pictures, if they have to be published, should not be exhibited on the front page," Retief said.

One of the photographs was captioned: "This picture shows the burning body of sangoma James Magagula, who was killed by Khutsong residents on Sunday. The people's paper is publishing the picture to show what happens in communities where there is no rule of law and justice is just a word."

The publisher, Jeremy Gordin argued: "We felt that an 'example' should be made of the horror that happens when people lose faith in the country's justice system … "

Hendrik Verwoerd's assassination
Section nine of the Press Code reads: "Due care and responsibility shall be exercised by the press with regard to the presentation of brutality, violence and suffering."

Gordin said a meeting of senior staff debated the use of the images and the consensus was that the pictures were in the public interest, and that the Daily Sun had adhered to section nine of the code.

Retief said the fact that a meeting was held was "commendable, and should be general practice", but did not guarantee a sound ethical outcome.

"The basic principle in this instance is that the more well-known a person is the more leeway the press has of publishing explicit pictures."

He cited the example of media coverage of the 1966 assassination of prime minister Hendrik Verwoerd, where most newspapers published colour photographs of his bloody body on their front pages.

Blocking out faces
"The public interest was so overriding that this was deemed to be acceptable," he said.

"However, this would not have been the case when a largely unknown person was murdered."

There was no doubt the Daily Sun should have covered the stories relating to the disputed images, but the manner in which it was presented was questionable.

Retief believed the newspaper should not have identified the bodies and should have avoided causing unnecessary harm to the victims' loved ones by adequately blocking out the faces of the corpses.

Also, the paper should not have published "gross details of wounds". The photographs, if used at all, should have been in black and white, small and not on the front page.

It should also have carried a front page warning for sensitive readers.

According to the complaints procedures, the Daily Sun has seven working days to appeal the ruling. – Sapa

Be careful what you pray for