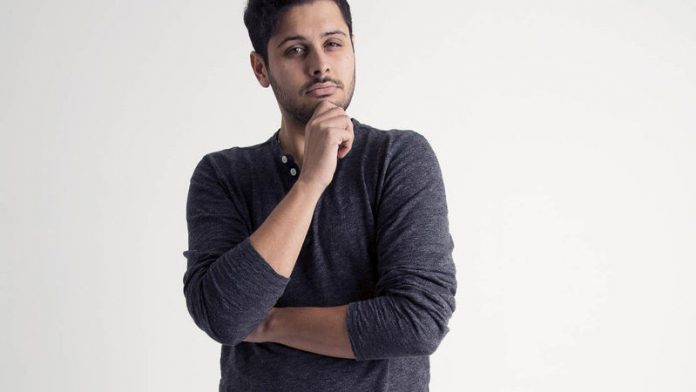 Comedian Simmi Areff started his career while he was still a student —doing stand-up at venues such as Cool Runnings in Melville and eventually taking over as one of the hosts of the regular Tuesday-night new-material gig at Kitchener's (his predecessor was Loyiso Gola) while he completed his honours degree in journalism.

Areff has been threatened with legal action by the South African National Halaal Authority for his tongue-in-cheek co-option of the Islamic authority's logo on the show's poster – which was amended to read "HAHA-laal", under the auspices of the "Simmi Areff National Ha-Ha-laal Authority".

After spending nearly a year as the support act for Riaad Moosa, Areff's debut one-man show Strictly Makrooh opens this weekend at the Joburg Theatre.

I used to exchange tweets with you: you would promote my music gigs, and I would punt your comedy nights at Kitchener's. I've always loved listening to the new material there – even the bad stuff – because it felt honest.
It was much quieter when we started [performing] there. Now they'll actually tell you if your joke is bad. It's a student spot. The audience were people I wanted to speak to – people who got me automatically. I didn't have to work to gain their trust. It was important, because the more time you spend on stage the more you learn. The fundamental thing about comedy is not the laughter, it's the silence. You have to be confident of the punchline. It's not that people aren't laughing, but they're listening.

Now that you're famous, do you have your own trailer or something?
I have a silly rider. Potato samoosas and an ice cream, preferably a Magnum.

And you're something of a teetotalling tea lover?
At the beginning of the year I decided to lose a lot of weight. I swam every day, played squash. I stopped drinking coffee and stopped taking sugar in my tea. I started to take my tea more seriously. There's this big tea place in Braamfontein. They have stuff like lavender and chocolate tea – they claim it's in there, but I can only smell it, I can't taste it. I like the herbal teas more.

Since your dispute with the halaal authority, you've spoken out a lot more about being a devout Muslim.
[Those who belong to] my religion come across as people who don't have fun. I consider myself a staunch Muslim. I don't have a big beard, just good principles. I'm extremely pious. During Ramadan I would go to other people's houses to read the Qur'an for them. It's just a talent I have. People would ask me how could I tell jokes and still read the Qur'an so nicely. Also, when I would read they would give me food. I may not go to mosque every day but I pray by myself.

Younger Muslims are totally on the same page. In our grandfather's generation, he would own a shop and his children would grow up and work in that shop. Now we've gone to university. We know there's a whole other world outside the corner shop – but the community hasn't moved past the corner-shop mentality.

What do you do for fun, when you're not offending conservative institutions?
My perfect day would be: wake up late, drink tea, and play PlayStation. I play Fifa; I'm playing a lot of GTA [Grand Theft Auto] right now. I love role-playing games – games like Final Fantasy, Skyrim – because I can just go into a dream world, I can be an elven warrior or a wizard. That stuff is cool. Also, I spend a large part of my life on social media. I use Twitter to timestamp jokes.

You've said, before, you would like to duet with Zahara?
It's a dream. I know all the words to Loliwe. In isiXhosa. I want to ask her what the song really means. It can't just be about a train.

What other music do you like?
I was listening to Rihanna earlier, but that's because I work at a radio station. I like Leonard Cohen, John Lennon, Kenny Rogers … I gave up being in Material to see Neil Diamond play live in my hometown. Durban has this thing with concerts where we can't pull crowds without a really old person. But he was amazing. My favourite song is I Am I Said – he didn't play it in Jo'burg, but he must have read my tweets or something because he did it as an encore in Durban.

Do you read?
I like reading. I used to read a lot, but these days I spend most of my time rewriting one-liners. I lost my copy of Kafka's The Metamorphosis somewhere between Lusaka and Middelburg. It's the best book, the ultimate classic. You'll know it's mine because my name is in it. If you have it, please return it.

Strictly Makrooh is at The Fringe at the Joburg Theatre on November 22 and 23 at 8pm. It has an age restriction of 13. Tickets cost R80