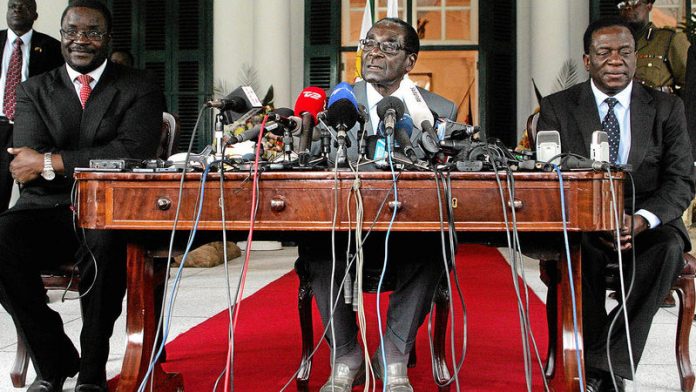 The widening rift between two Zanu-PF factions fighting to succeed President Robert Mugabe is threatening to tear the party apart and it has had to call a rare polit­buro meeting at its headquarters in Harare on Saturday. It is Zanu-PF's highest decision-making body.

Mugabe is out of the country attending the Arab-African summit in Kuwait and, in his absence and with no one to rein them in, senior party members this week took their fights public, trading insults in newspapers.

Mugabe will preside over the Satur­day meeting. Zanu-PF is divided into two factions, one led by Vice-President Joice Mujuru and the other by Justice, Legal and Parliamentary Affairs Minister Emmerson Mnangagwa, who both hope to succeed Mugabe.

But publicly they both deny heading the factions. The public insults appear to give credence to Mugabe's claim that he cannot retire because divisions would split the party.

The widening fracture has emerged from the current provincial polls the party is holding to choose provincial party leaders.

The polls are crucial to Zanu-PF's succession battle as the party's national leaders are chosen at congress by the provincial chairpersons.

Provincial elections
So the two factions are vying to win control of as many provinces as possible. The next party congress is due in 2014.

So far provincial elections have been held in three provinces – Mashonaland Central, the Midlands and Manicaland – and all the results are being contested.

Mujuru's faction has taken the lead in all three. There are also petitions to nullify the results in Manicaland and the Midlands, and the elections in seven of the remaining provinces that were scheduled for Saturday have been suspended owing to the chaos.

Zanu-PF politburo sources this week said that, at Saturday's indaba, the Mnangagwa faction, sensing defeat, will be pushing for the postponement of the polls until next year to buy time and regroup.

The same sources said Mujuru and her allies will be leaning on Mugabe to ensure that the gains achieved so far are not reversed.

Party insiders say Mugabe does not have a favourite. Both Mujuru and Mnangagwa are long-serving party faithfuls and have been unwaveringly loyal to him.

Results yet to be "endorsed"
Mugabe's spokesperson, George Charamba, this week waded into the factional fighting.

He said he was under instruction from Mugabe, who had already left the country, to inform Zanu-PF members that the results in Mashonaland Central have yet to be "endorsed" – which triggered a war of words with the party's spokesperson, Rugare Gumbo, who said Charamba is a civil servant and must not make party announcements.

The Zanu-PF secretary for administration, Didymus Mutasa, came out in support of Gumbo and said Charamba had "jumped the gun".

"The party, at lower levels, is democratic but the high echelons are not. People try to force what they want, not what the people want," Mutasa said.

Charamba responded by saying that his role is simply to transmit messages.

"I never seek to be the message," he said. "Consequently, my role began and ended with the instruction from the president, which I believe I delivered to all the concerned."

An unnecessary sideshow
On Tuesday, Information, Media and Broadcasting Services Minister Jonathan Moyo described the fighting as an unnecessary sideshow and urged party members not to concentrate on internal politics or the succession issue as it had cost Zanu-PF votes in the 2008 polls.

"This time the message is ‘not again'," said Moyo, who himself ran into trouble in 2004 over allegations that he had led a failed plot to thwart Mujuru's elevation and make Mnangagwa vice-president instead.

Earlier in the week, Moyo also attacked Gumbo for allegedly making "mischievous claims" about the outcome of voting in Mashonaland Central.

Moyo and Charamba both insist that Mugabe said the result is yet to be finalised.

But Gumbo hit back and described both men as "tricksters" who wanted him to fall out of favour with Mugabe.

The state-run Herald newspaper, on which Moyo and Charamba maintain a strong hold, attacked Gumbo and Mutasa in a front-page editorial and warned that the paper is a "watchdog not a lapdog and where need be, the teeth [will] come out".

Results will stand
Mutasa and Gumbo allegedly support Mujuru. In an interview on Tuesday, Gumbo said the official party position is that all the results in the three provinces where voting has taken place will stand.

He declined to respond to attacks on him and Mutasa.

"We have never been attacked like that before but the reality of the struggle is that people can do anything," he said.

He would not elaborate on what he meant by the struggle.

A failure to address it could fuel dangerous internal conflicts within Zanu-PF, which could become a threat to national security.

A Mugabe move?
"The party is in an unprecedented fix and the stakes are very high. The reality of old age relegates Mugabe to retirement at a time when Zanu-PF looks clueless on internal change management strategies, as actors deploy all kinds of tactics and resources to succeed him," Chitanga said.

Media analyst Brighton Musonza said it is possible that the latest falling-out over Mugabe's directive could be a cunning move by Mugabe himself, an example of his well-known divide-and-rule tactics that have ensured his prolonged stay at the helm of the country.

Because of the escalating tension, Mugabe could easily persuade the factions to remove or postpone succession from the party's agenda, he said.

However, the infighting has shown that Mujuru is commanding more political clout than Mnangagwa.

"To her side in the party, she has Didymus Mutasa, who, as secretary for administration, has the nerve centre of the party. Mutasa's family is close to President Mugabe, and his wife, Janet, a former senior army medical officer, is said to be the family nurse.

"Mujuru also has Simon Khaya Moyo to her corner, who, as the national chairman, can authorise, authenticate and ratify processes and procedures deemed otherwise. That faction also has Webster Shamu as the political commissar and he is the runner – trouble-shooting and stitching up political skulduggery," Musonza said.

"That faction also carries the legacy of the late General [Solomon] Mujuru and most retired military officials who are now running Zanu-PF structures."