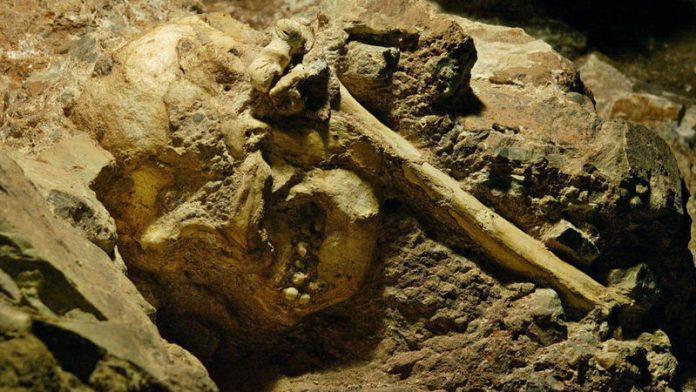 It is dark down the chute, an 11m drop linking the tunnels above to the excavation chamber below. Droplets of water bead on your brow and arms, part sweat, part humidity. The air is earthy and thick with moisture, making you even more aware of the metres of heavy soil above you. At its narrowest point, the chute is only 18cm across. A thick, cotton workman’s suit hangs heavily on your frame, but you have to be covered so that the jutting rocks do not pierce and scrape skin. You take a deep breath, trying to get oxygen out of the saturated air, and prepare to go down.

This is what six scientists have been experiencing daily as they risk their lives to gather fossils from an underground cave in the Cradle of Humankind. For three weeks, these women have been working shifts of between four and seven hours painstakingly dusting and removing hominid and other animal bones from what has been described as the richest fossil site in South Africa. The Rising Star Expedition, the catchy name given to the excursion, is a collaboration between Wits University and National Geographic.

"Archaeology has a reputation as being an old boys club," says Becca Peixotto, one of the caving scientists. "But the generation of scientists before me and my generation are changing the landscape."

Mastermind of the expedition, Professor Lee Berger, says that these women are an inspiration for all scientists, and particularly young female scientists. "Too often, women … doing this type of science think they are largely going to end up in a lab, doing lab work. [These] women are quite literally risking their lives at the front end of a scientific expedition."

Multiple hominids
On Tuesday, the last day of the Rising Star Expedition, Peixotto is manning the control centre, watching her colleagues via underground cameras. The centre – a green canvas tent containing screens, computers and telephones – is never unmanned while someone is in the cave, which is 30m underground.

Australian Elen Feuerriegel is in the fossil chamber, lying on her side, a head torch lighting the area she is gently brushing to unearth what looks like a leg or arm bone. A 3D mapping programme will mark where in the dig site – which is actually less than two square metres – the fossil was found and automatically tag it.

Berger refuses to comment on how many hominids are at the site, their species or age. He told the Mail & Guardian that the team had found more than one skull of an early hominid. "We have partial skulls that are coming out … [from] multiple individuals," he says.

The specimens are taken from the excavation site to the science tent, where they are catalogued and the automatic tag verified.Then they are bagged, boxed and added to the other thousand specimens that have been found on the site. Berger jokes that the Rising Star Expedition has bought out all the boxes in that area of Gauteng.

Site a 'treasure trove'
Even though the team has pulled out, Berger says, "We don't have anywhere near [all of the fossils]. We haven't scratched the surface. This excavation will go on for decades."

The expedition was initially begun to recover a single skeleton, not a "treasure trove". We need to re-assess the scientific plan and also how to deal with the abundance of material … We are excavating [only] the most exposed fossils."

Irrespective of what hominids are uncovered, the expedition itself is remarkable: an all-women team at the coal face of archaeological dig, which includes spelunking down into a cave deep under ground, and which was organised and completed in a number of weeks.

Berger says he first found out about the fossils on October 1, and then mobilised funding and a very specific team (scientists who had caving experience and could fit through the tiny cave entrance) for an expedition which began on November 10. Three weeks later, they have specimens of some of the most sought after fossils – hominids.

Part of the rush was that the fossils were "vulnerably exposed", Berger says. While he initially made mention of the summer rains in Gauteng forcing his hand, it would appear that was not the only concern: "Someone had been there before, there was some damage."

'Backyard syndrome'
The National Geographic’s Andrew Howley refused to give details of the exact topography of the cave – saying only that "there are tunnels, a climb and a chute" and then the excavation site – because the area had been used for recreational caving, and he did not want to give away its location.

People had been there without knowing the "treasure trove" they had been standing on. In fact, Berger says that there is a Barefoot Policy, and all cavers have to take their shoes off so that they can feel when fossils are underfoot and avoid them.

Another layer to this tale is that archaeologists have been in that area, looking for fossils, since 1947, Berger says. The site is about 15km from Malapa (where Berger found Australopithicus sediba fossils in 2008); 1km from Sterkfontein (where Mrs Ples, an Australopithicus africanus, was found) and 600m from Swartkrantz (where there is the oldest evidence of humans using fire).

"[These fossils] were truly under our noses … It’s 'backyard syndrome': we think we know what’s there, but we don’t."

But even though there are still fossils at the site, which does not yet have a name, the team needs to pull out to regroup. "We are shutting the doors behind us," says Berger, joking that some people say he should build a snake pit or a rolling boulder, like the one in the Indiana Jones movie, to keep unwanted people out.

The area will be protected, he says.

Pooling knowledge
The major task now is analysis. When Berger discovered Australopithicus sediba in 2008, "there were 250 elements [that] took thousands of man hours to [limn]". But this expedition has yielded thousands.

John Hawks, associate professor of anthropology at the University of Wisconsin, who is also working on the expedition, says that if the team was to analyse the data in the "traditional way", which involved groups keeping the data to themselves and analysing it using their data sets only, "it would take more people than there are in the field".

Berger believes that the only way to analyse all the data is to go open source, and pool global resources. "We're going to explore the concept of developing a new way of sharing data." Also, South African postgraduates and emerging researchers will get a chance that most seasoned paleo scientists only dream of: to work on the primary analysis of what might be the largest single fossil find in South Africa.