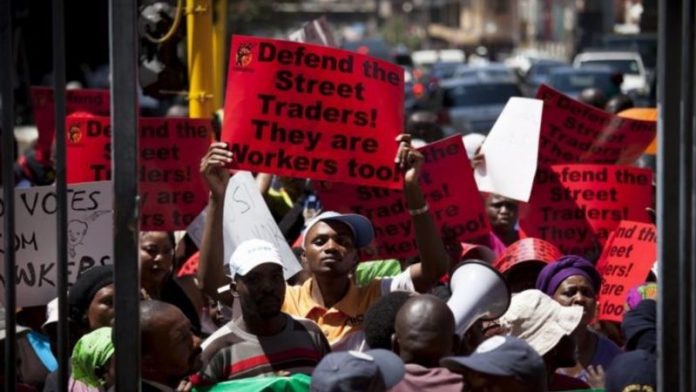 The City of Johannesburg may have won a temporary court victory against street traders on Wednesday but the Socio Economic Rights Institute (Seri) is planning a new court action, this time taking a group of Johannesburg Metro Police Department (JMPD) to court for allegedly beating and insulting a Mozambican street trader last week Friday.

Albertina Mosabi (not real name) has laid criminal charges and is pursuing a civil suit against a group of JMPD officers who allegedly assaulted her for continuing to sell on the streets despite the City’s "operation clean sweep" which has removed all traders from the city.

Mosabi makes a living by selling vegetables along Kerk and Troy Street. She is still reeling from the attack and has refused to  give out her name in fear of reprisals.

Mosabi claims she was trying to film a group of JMPD officers who were assaulting a fellow hawker for selling defiantly on Kerk street.

"They said I was making a journalist by trying to film the assault. They pushed and forced me into the back of a van where I was severely assaulted and called all sorts of names. There were a lot of xenophobic slurs directed at me as well. They said it is illegal to take photos of the police doing their job," said Mosabi.

She was eventually charged with resisting arrest and kept at the Johannesburg Central Police Station. The following day she managed to get R500 bail and went home.

Mosabi says an ambulance was later arranged by her friends to take her to the Hillbrow Community Health Care Centre, where she was given pain medication and released.

Prosecutors later declined to press charges when the matter went to court on Monday.

Claiming for damages
Seri attorney, Nomthandazo Zondo, said they will be instituting damages claims against the JMPD and the City of Johannesburg.

"The courts conclusion that the matter was not urgent amounts to condonation of the City’s illegal behaviour and we are bracing ourselves for more brutality from the JMPD and unlawful and unjustified arrests of our clients. We are considering other remedies that may be available to our clients,"Zondo said.

Mosabi has since laid criminal charges against the officers through the assistance of Seri attorneys.

JMPD spokesperson, Edna Mamonyane, said they have no record of Mosabi reporting this matter to them and encouraged her to come forward.

Earlier this week, the high court in Johannesburg dismissed an application by informal traders who wanted to return back to trade on the streets of Johannesburg. The court held that their application had been a tad too late to warrant being heard on an urgent basis.