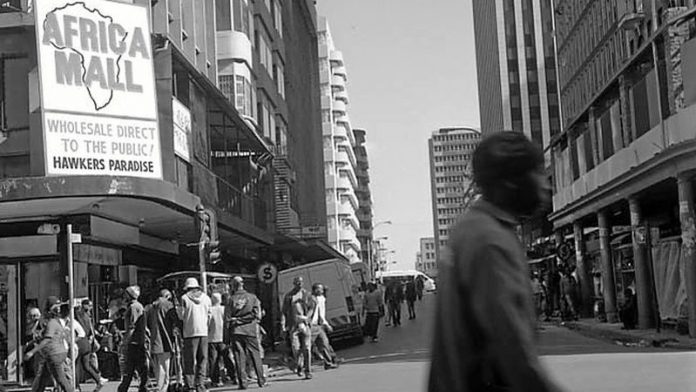 "Have you ever seen a Jo'burg sunset, with its gold dust in the air?" asks Nigerian photographer Akinbode Akinbiyi. "At that time of day it's like there are gold particles in the air. It's a magical city in a way. It's rich in history. It's special, even with its mine dumps."

His fascination with the city and its otherworldly appeal is the reason for the title of his latest body of work, (Alice) Adama in Wonderland, a play on Lewis Carroll's classic, which is currently on show at the Goethe-Institut in Johannesburg.

"I've realised that I'm looking for my childhood," Akinbiyi says. "Whenever I find such moments – fragments of innocence lost – I take photographs."

For 10 weeks at the end of last year Akinbiyi left Berlin – where he now lives – to capture "innocence lost" in the City of Gold, which he refers to as a "strange place".

The Goethe-Institut exhibition is an extension of his ongoing photographic project, in which he documents Africa's megacities, including Lagos, Accra, Dakar and Bamako.

Born in Oxford, Britain, in 1946, Akinbiyi's Nigerian parents were, he says, "sent to the motherland" by the country's then-British rulers to study at Oxford University. Akinbiyi, who moved to Lagos with his family at the age of four, travelled back and forth between Oxford and Lagos – the two cities in which he was educated.

Later, he headed to Germany, where he dropped out of his postgraduate studies in literature to pursue a career in photography.

Tracing the source of his fascination with Johannesburg, Akinbiyi credits the work of South African photographer David Goldblatt during the late 1970s, specifically his book On the Mines. Despite Johannesburg's stark, sometimes brutal disparities, Akinbiyi speaks of the city with both hope and scepticism.

"Jo'burg is a crucial city. Its post-apartheid state leaves it conflicted. When I look at people's faces I see a kind of underlying anxiousness, which manifests itself in people walking fast and bumping into each other without apologising."

During his wanderings, he documented the city's contrasting landscapes – the neglected fields of Westgate, the bustling streets of Johannesburg's inner city and Parkhurst's deserted suburban pavements, among others.

Like the images in Goldblatt's famous book and the photographs by Roy DeCarava in the United States, whose brooding jazz images shaped Akinbiyi's photographic outlook, his black-and-white images trace the fine line between documentary and art photography.

"I take photographs with a medium-format camera – an analogue Rolleiflex – and I use black-and-white film," he says. "I don't do digital. I've grown up in an analogue mode."

Merging his architectural, reportage and art photography repertoire, Akinbiyi's oeuvre doesn't glamorise Johannesburg but neither does it aim to demonise it.

With his rather unconventional framing, he seems to have captured what he was seeking on the city's streets – what he calls its "essential essence", a place where fine gold dust floats "ever so ephemerally in the evening twilight".