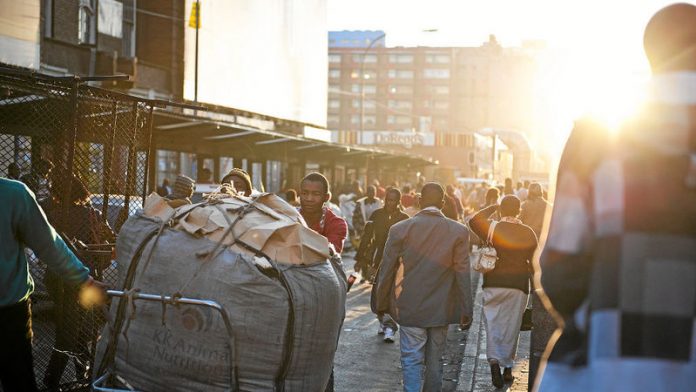 The introduction of trade information desk officers at key border posts between Zimbabwe, Zambia and Malawi has boosted trade in the region and made cumbersome customs processes easier for thousands of small-scale cross-border traders.

However, the funding through the Common Market for Eastern and Southern Africa (Comesa) will come to an end, which means the trade information desk officers could start charging for their services.

"We like this trade information desk," says Vivien Masonda, as she fills in her customs clearance forms at the Chirundu border post, during a round of interviews facilitated by the UKAid-funded programme TradeMark Southern Africa (TMSA).

There is a lot of hustle and bustle at the crossing between Zambia and Zimbabwe. A bus has just arrived and traders are preparing their luggage for customs.

Masonda is also on the bus, as she has been so often over the past five years.

"It is so much better now than in the past, so much quicker," she says.

Each month the 36-year-old Zambian takes a bus to South Africa to stock up on clothes and fashion items, which she sells in Zambia to support herself and her three children.

The introduction of Comesa's simplified trade regime – and the addition of an information officer to aid implementation of that policy – has helped tremendously, Masonda says.

"In the past, the traders on the bus used to be delayed by customs officers and my customers would have to wait for me. Now we don't even wait an hour any more."

Under the simplified trade regime, traders can move goods without paying duty between the participating countries if the commodities are on a list and if the total consignment is worth less than $1 000, explains Chirundu's trade information desk officer, Sydney Mudenda.

"The aim of this programme is to promote free trade in the region," he says. Although not all of Masonda's goods qualify for the tax exemptions of the simplified trade regime, she still benefits from the policy.

"There is good information now and I know what to pay."

Boosting trade
The trade information desk officers have undergone training in border and customs procedures and are able to take up complaints and problems that traders have with the local cross- border traders' association.

"When I started in 2010 people were apprehensive because they did not know what I was doing here. But since then the response has been overwhelming," says Mudenda.

Some traders are illiterate or have a history of having been taken advantage of by border officials.

Now the information officers help them to smooth and clarify procedures. Mudenda documents each transaction and helps traders to fill in the simplified documentation and liaises with representatives from the departments of health and agriculture if necessary.

"It is encouraging trade when people use this system. They feel free and the frequency of their trade increases," says Mudenda.

Traders need to take whatever documentation they can to prove the goods originate from one of the Comesa countries so that they can obtain a simple certificate of origin at the border.

Clement Mulenga, the Zambian senior collector at Chirundu, says trade has increased immensely over the past few years.

He says the establishing of a one-stop border post has contributed to this, but he also hails the role of the simplified trade regime and the trade information desk officer.

"There are now about eight buses a day from what used to be two buses a week back in 2009."

The waiting time at the border now rarely exceeds two hours, whereas before it could take a whole day, says Mulenga. "It is easier for them now to use the official border, which means our revenue has also increased."

Besides aiding traders, trade information desk officers have given authorities a much better insight into the type of goods that are crossing the border on a daily basis.

"Here at Chirundu popular products that are traded from Zambia to Zimbabwe include wool, caterpillars, plastic kitchenware and bananas," says Mudenda.

"Cleaning agents are often traded the other way around, from Zimbabwe to Zambia."

A good example comes from the Kariba border post, where information officer Shungu Matesanwa noticed that an arbitrary restriction on heavy vehicles crossing the dam wall was hampering local businesses such as bakeries, fisheries and a nearby crocodile farm.

"The regulations were not evenly enforced and some large overland trucks were still allowed to cross," says Matesanwa.

Investigations into the tonnage restriction showed that there was no technical basis for it, but vehicles over three tonnes had been stopped from crossing the dam wall since 2005.

Thanks to the trade information desk officer reporting the problem, this rule was reversed two years ago.

"We bring 480 tonnes of mackerel through the Kariba bridge each year as well as 120 tonnes of salt," says Livingstone Chado, who works at a large crocodile farm in Kariba.

"The difference is huge now that we can use the Kariba bridge again. If you look at the total travelling time, 14 days to get our goods here has been reduced to seven," says Chado.

Informal cross-border traders also benefited from the lifting of the restriction because buses can come through again.

An average of two buses a day now carries about 3 500 passengers each month through the border.

"There is a significant change here in Kariba," confirms Matesanwa.

"Traders can now come and go on the same day or on consecutive days and it benefits a lot of businesses in Kariba town too."

However, he is worried about the sustainability of the project.

Challenges
"We need more funds so we can pay them and deploy more trade information desk officers at other border posts in the region."

There are currently eight information officers at four border posts (Kariba, Mwami-Mchinji, Chirundu and Livingstone-Victoria Falls) that are part of the simplified trade regime.

These officers are funded by Comesa's cross-border trade reform project and are equipped with computers and copiers.

According to a Comesa report, the trade desk information officers regularly complain that their salaries are too low and that they do not always get paid in time, something Mudenda and Matesanwa confirmed.

According to Comesa, in the longer term the responsibility for the desk officers needs to be transferred to local associations.

Comesa also says the trade information desk officers might have to start charging for their services to make the desk "sustainable in the long term".

Because this would make it less attractive for traders to make use of the officers, it does cast some doubt on the sustainability of the project.

Many traders prefer to use informal trading routes between Zambia and Malawi and Zimbabwe and Zambia. Even after the introduction of the simplified trade regime it is cheaper and easier for people to eschew the official border.

Under-invoicing, misclassification of goods and bribing of border officials are other forms of smuggling that Comesa regularly notices.

Comesa's internal research confirms that "it is indeed more profitable for the small trader to smuggle than go through the normal route and pay taxes that are applicable after the waiver of duty.

"This analysis though is oblivious to the risks associated with smuggling. These include potential loss of goods, incarceration or fines."

"It is easier for them now to use the official border, which means our revenue has also increased"