Homes at the heart of land reform 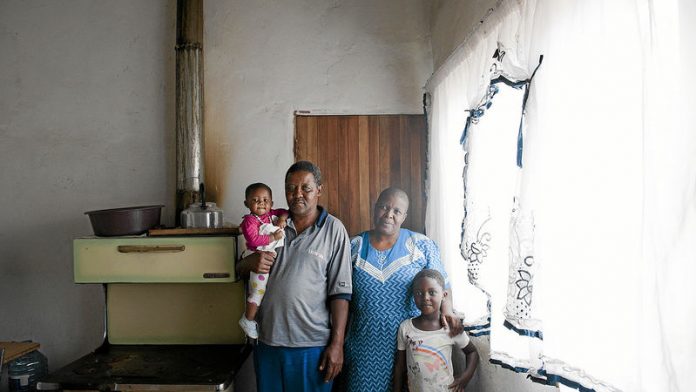 You may not know it, but a revolution began in the Free State's sleepy Ngwathe municipality on October 22 this year. And Likeleli Susan Molalogi, a pensioner living in the Tumahole settlement outside Parys, is one of the first participants.

She has lived in the area her whole life but moved from her family home to municipal land in 1982, where she built a shack.

With what she could spare from her income as a cashier at Shoprite, the single mother built a five-roomed house of brick and mortar, "little bit by little bit", over the years — despite never owning the property.

But, last month, that changed and Molalogi received the title deeds to the land she has called home for more than 30 years.

She is one of 100 people who recently received full property rights — 100 years after the 1913 Land Act was passed — through the Ngwathe Land Reform Project.

The Act prevented black South Africans from owning land, even in the so-called homelands, and the majority continue to live on government land under leasehold agreements.

The households were part of a pilot property reform project, initiated by the Free Market Foundation in conjunction with First National Bank, which funded the first 100 title deeds, as well as the Law Review Project, Ernst & Young, the law firm Routledge Modise, the Ngwathe municipality and the Free State province.

The project aims to oversee the transfer of 30 000 property rights over the next few years and the Ngwathe municipality has resolved to become the first urban area in which all land will be privately held under full freehold title, which gives owners the full right to alter or trade their property as they wish.

Jeanette Mpondo, who handled the administration for the first 100 title deeds, said the prices for those properties varied widely from R30 000 for an empty stand up to R200 000 for an established formal house.

The Free Market Foundation's executive director, Leon Louw, said a lack of title deeds is not unusual in developing countries.

"The land which South Africans occupy but do not own is dead capital. You can't let it and you can't sell it," Louw said.

"Nationalising" the land
"We talk about land restitution being reformed and redistributed. [But] land is not being redistributed — it's being nationalised; it is being occupied by black people on government land. We are saying, give the land to people who are occupying it; let them own it."

Property rights are widely considered the key to economic security and wealth creation, and replicating the Ngwathe project could have a significant impact on the country.

But exactly how many black South Africans have established homes on land they do not own is not known.

"No one has any idea," Louw said. "It seems as if there are informed people making informed guesses that there are between five- and 10-million pieces of land and households that exist … Redistributing 10 000 white commercial lands into black hands will have no material effect. [Projects such as Ngwathe] will make a true difference."

Converting local government land to freehold ownership will also widen the tax base as paying rates and taxes comes with owning a property.

The foundation approached the Ngwathe council in 2011 to help it to convert its land to full ownership, to which the municipality agreed.

Property rights
The project aimed to get property rights extended to wide range of properties, from shacks to formal houses, including RDP housing, in a bid to do away with pre-emptive clauses that prevented owners from selling their RDP properties for the first eight years of occupancy.

Even among those living in Ngwathe, there is a belief that title deeds could be wasted on some who will rack up loans against their property or sell it and squander the money.

But according to Louw, one effect of land ownership is that the deed holders tend to invest in their property.

"In Brazil [where property rights were extended to those living in one informal settlement], people started going home with a bottle of paint instead of a bottle of brandy."

And in Ngwathe property owners are already planning upgrades. Although she is in her 60s, the house-proud Molalogi is preoccupied with extending her house.

"Still, in front here, I am not finished," she said, referring to the cement slabs lying outside the house, which will become part of a lounge. She shudders at the thought of taking out a loan against her property and selling is simply not an option.

From shack to brick house
"No, I can't," she said. "It's my life. Money is not your life. Money is just money. What about my family? Where will they live?"

Elizabeth and Thomas Molobeng also recently became the official owners of their house in Tumahole, where they first set up a shack in 1990.

Over the years it has been transformed into a three-bedroomed brick house. They are already planning alterations, such as a wall and paving around the property as well as a double garage, even though they do not have a car.

"We also want to tile the roof," Elizabeth said, pointing to the rusted corrugated iron roof that has been in use since the 1970s and came from Thomas's parents' house.

Most of all, the Molobengs are satisfied to know they have the title deeds.

"I know this is my own," Elizabeth said, her hand on her chest.

Creating wealth by helping people
With the recent death of their daugh­ter, they are also the caretakers of two young children, Babalo, who is six, and Nyakallo, who is seven months old.

Thomas seemed open to the idea of taking out a loan against the house should the need arise.

According to Marius Marais, head of affordable housing at FNB, the bank's intention is to create wealth by helping people to use their properties as security.

"These homeowners now have a key asset that they can use when approaching banks. We truly believe that home ownership is key to wealth creation and economic empowerment. It is only through tradeable title deeds that these homeowners can reap the benefits of legally owning and occupying their homes," Marais said.

Molalogi and the Molobengs are some of the more fortunate applicants. It took almost three years to get the first 100 done and the 500 outstanding cases have encountered a number of hurdles. In law, the process is very complicated and costly. Legally, it's a nightmare, Louw said.

"But that is what South Africa faces. It is a monstrous undertaking, but we can't say apartheid is over until the job is done."

Getting around red tape
Hein Duvenhage, a conveyancer at Glover & Associates, the transferring attorneys that took on the transfer of 92 of the title deeds, said that, of all those outstanding, only 25% can continue without complications.

To help other municipalities to roll out a similar initiative, Duven­hage compiled a guide for the foundation, which details what red tape can be expected and how to get around it.

Critically, the local authority must be willing to give up its land in order to implement the conversion from leasehold to freehold.

"As far as we know, there is a lot of ambivalence about this," Louw said. "Mostly councils don't want to lose control — if you control where people live, you control people."

Tribal land presents a similar if not more difficult challenge. "That kind of problem with the occupancy certificates would be a problem, which is much more prevalent in rural areas," Kerwin Lebone, a researcher at the Institute of Race Relations, said.

"In our opinion, [the institute] felt the government was pandering to traditional chiefs, which is an important constituency for them."

Lebone said traditional chiefs hold land in trust and will not give it up easily. But, he said, the government has made large strides to reverse land disempowerment.

After 1994, for example, it sold four-bedroomed council houses in Soweto to the occupants for a total discounted amount of R3-billion when the accumulated value was estimated to be R24-billion.

But the problem of property rights has manifested itself even when it comes to new buildings: an estimated 48% of three million RDP houses had not been registered or transferred into the recipients' names by the end of 2010.

From its experience in converting 100 properties to full freehold title in the Ngwathe Land Reform Project, conveyancers Glover and Associates have compiled a "how-to manual" for local governments wanting to convert land under their control.

Established townships have varying title deed conditions. But importantly, land earmarked for conversion to freehold title needs to be properly planned and surveyed, a challenge considering that informal settlements have often not been subject to such a process.

According to Andres Sepp, the acting registrar of deeds at the office of the chief registrar of deeds, the state must have the property surveyed and take up a registered state title deed, and can then transfer it as it wishes.

Kerwin Lebone, a researcher at the South African Institute for Race Relations, said there have been cases of engineers refusing to certify land that was not safe even though people had settled on it, such as on a flood line.

In such a cases, the manual says residents should be relocated, as soon as resources permit, to properties where they can obtain full title.

The most prevalent challenge is arrears rent, rates and other municipal charges, dating back to the rent boycotts of the 1970s.

The municipality is prohibited from simply writing off the debt. So, in the case of the Ngwathe project, the amounts owed were instead delinked from the land and converted into civil debt, to which the transferees agreed. This enabled the council to issue the rates clearance certificates required for the transfer.

The transactions are also exempt from transfer duty, but this requires a certificate from the South African Revenue Service and the matter is complicated when transferees are not registered for income tax.

Dispute resolution is also integral as there may be various claimants. In the case of a deceased occupant leaving the property to their family, there is also uncertainty about whether to register the property as individually or jointly owned.