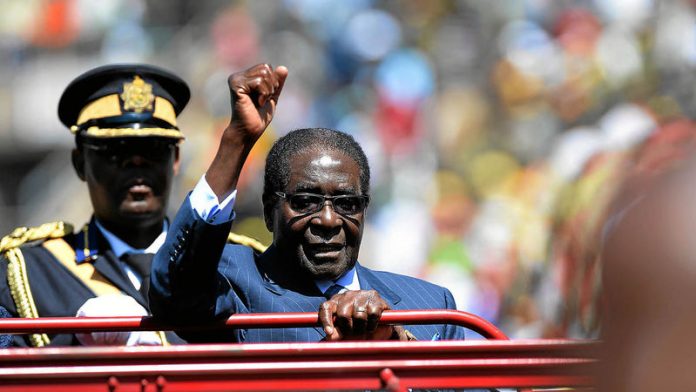 Saturday marks 100 days since President ­Robert Mugabe's colourful ­inauguration, but there is little to celebrate as he struggles to lift the economy out of the doldrums and analysts say the odds are stacked against him.

Buoyed by the large turnout to see him take the oath for his seventh consecutive term in office, Mugabe did not disappoint in his acceptance speech, outlining the gigantic task he faced in turning around Zimbabwe's economic fortunes and promising to deliver all his electoral promises.

"The peasant who cast his vote on July 31 created my victory and thus made a portion of my presidency .

He or she did not cast that precious vote in vain, did not repose it in us without expectations of a good, deserved return," said Mugabe. Similar promises were made to the unemployed youth, businesspersons, even farmers.

The economic decline was Zanu-PF's stumbling block when it lost its parliamentary majority to the opposition Movement for Democratic change. Now, having secured a victory and 100 days down the road, analysts say Mugabe and his government are back in the same place — facing a mammoth economic hurdle.

Liquidity crunch
Zimbabwe continues to face a serious liquidity crunch, which has affected most companies, forcing closures or retrenchments. Between September and October, nine companies went into liquidation, and 12 were placed under judicial management, joining dozens of others that have collapsed this year alone.

Capacity utilisation in the manufacturing sector continues to dip, and is now hovering at about 39%, according to the Confederation of Zimbabwe Industries.

This also contributed immensely to the liquidity crunch. Reports of banks turning away clients because they cannot meet cash withdrawals, though isolated, do not inspire confidence. The government is also struggling to

deliver social services, with water and electricity shortages still the order of the day. Last week, a Human Rights Watch report said Harare was at risk of a cholera outbreak.

Thawing relations
"The first 100 days have been mostly about policy formulation, but we now want to see implementation. It is positive that [the government] has developed a new economic programme [the Zimbabwe Agenda for Sustainable Socio-Economic Transformation (Zim Asset)], and is consulting the private sector on its implementation and on the budget instead of being dictatorial," said ­economic analyst Dr Eric Bloch.

Also on a positive note, Bloch said there had been an easing of tensions between Harare and some Western countries. Several Western ambassadors had told the government they wanted to normalise relations with Zimbabwe, and the European Union had lifted sanctions on the Zimbabwe Mining Development Commission and its subsidiaries, opening up the European ­market for the country's diamonds.

The European Union's head of delegation to Zimbabwe, Aldo Dell'Ariccia, recently told the Mail & Guardian that new Indigenisation Minister Francis Nhema was sending the correct signals to would-be investors, pointing out that European investors were keen to invest in Zimbabwe, although most were still waiting to see the direction the government would take.

Another economic analyst, John Robertson, believes that, despite coming up with Zim Asset and making some positive statements, the government's plans remain a wish list that will be almost impossible to realise, given the challenges facing the nation.

"We don't want to hear promises, we want to see movement.  We want to see the government getting rid of all policies which are stifling growth. It doesn't help, for example, that the new indigenisation minister will apply the policy more gently; it can be applied more harshly anytime.  If the policy is bad, it should be removed."

The liquidity crisis remained a serious challenge and would militate against efforts by the government to turn the economy around. The country should urgently put in place policies that would attract investment, he said.

Policy contradictions
"The major casualty of these policies is the unemployed. About 300 000 people will leave schools when they close next week, and they will be looking for jobs. Between 20 000 to 30 000 people graduated this year, and they are all looking for jobs in a shrinking economy, Robertson said."

The secretary general of the Zimbabwe Congress of Trade Unions, Japhet Moyo, said there had been a sharp increase in retrenchment over the past three months.

"The ZCTU has noted unpre–cedented high levels of retrenchment of up to 150 per week over three months and, in the past two weeks of November, the figure has risen to almost 300 a week, a sign that the economy is reaching a dead end."

Dr Godfrey Kanyenze, from the Labour and Economic Development Research Institute of Zimbabwe, said the government's decision to continue with a populist, consumptive framework would render useless efforts to turn around the economy.

He said the decision to write off electricity debts soon after winning elections would prove costly in the long run to the Zimbabwe Electricity Supply Authority, which was already struggling to provide enough power to domestic and industrial users.

"The government also promised public servants poverty datum line- related salaries, yet it has not managed to boost its revenue. As we heard from the finance minister, diamond revenue is still not finding its way to the treasury, while the mining sector, which has been contributing about 65.2% of our export revenue, has been affected by weak commodity prices.

"The Zimbabwe Revenue Authority has also missed its revenue collection target, so the revenue side is not increasing, while expenditure continues to rise. So far, the government has not shown the capacity to deliver on its promises, or the ability to live within its means, so the first 100 days have not done much to give people confidence."

Political troubles
There is also concern that Mugabe cannot pay full attention to economic issues as he is preoccupied with mediating internal battles over his succession.

In Mugabe's absence last week, two factions took their fight public in a mudslinging battle. Mugabe had to call off provincial party elections amid allegations of vote rigging.