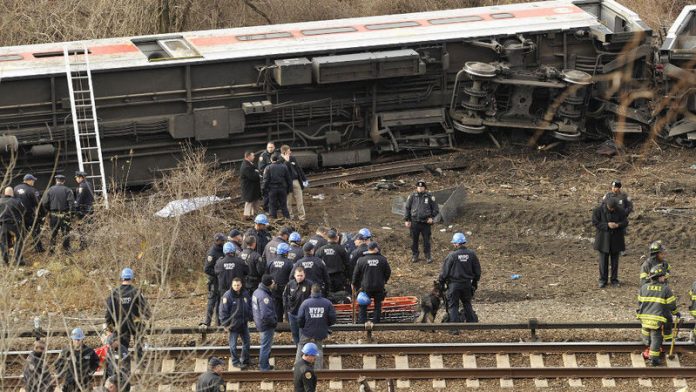 At least four people were killed and 63 injured, including 11 critically, when a suburban train derailed in New York on Sunday, with at least five cars from the Metro-North train sliding off the tracks, officials said.

The train derailed on a large curved section of track at 7.20am in New York about 100 metres north of Metro North's Spuyten Duyvil station in the Bronx borough, said Aaron Donovan, a spokesperson for Metro North, a subsidiary of New York State's Metropolitan Transportation Authority.

A spokesperson for the city fire department confirmed the number of dead and said 11 people were in critical condition, six were in serious condition with non-life threatening injuries and another 46 sustained minor injuries.

At least one rail car was lying toppled near the Hudson River and police and other rescue workers were searching for survivors along the shoreline and the waterway.

New York Police Department divers were seen in the water near the scene of the accident, and dozens of firefighters were on the scene helping pull people from the wreckage.

Tour the scene
The train was a diesel with seven cars. The locomotive was on the north end pushing the cars southward.

New York Governor Andrew Cuomo was preparing to tour the scene, a spokesperson for the governor said. – Reuters