Amazon drones and the rise of robotic air travel 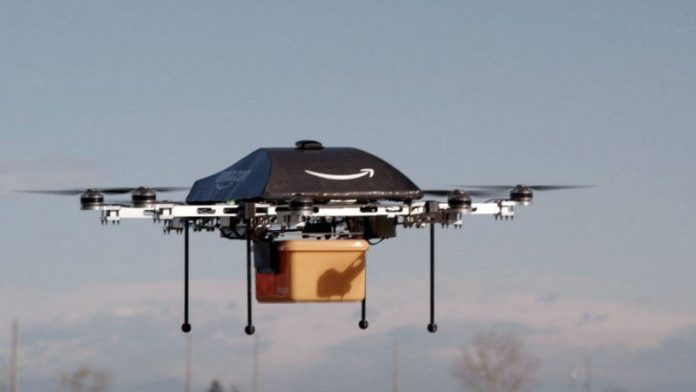 Unmanned drones don't have a very good reputation. They're usually associated with assassinating terrorist leaders or spying on celebrities. But that may change when they start delivering birthday presents.

Jeff Bezos, the irrepressible founder and chief executive of Amazon.com, announced on Sunday that his company was working on a system to deliver small packages to customers within 30 minutes or less of ordering them. They will do this using tiny unmanned aircraft – technically "octocopters" – that can carry packages weighing around 2kg up to 16km.

Speaking on 60 Minutes, CBS's venerable television news programme, Bezos said: "I know this looks like science fiction. It's not." The only real barrier to the service – christened Amazon Prime Air – is whether the US Federal Aviation Administration [FAA] will give its permission for this unprecedented use of the airways over major American cities."

So is this just a gimmick, or is Amazon really planning to make this a widely available service? Twenty years of tireless innovation and market disruption suggest that Bezos does not bluff. Assuming that he can charm the FAA (and he can be very charming), Amazon drones will be buzzing around delivering bundles of joy as early as 2015.

Amazon is not the first company to think of this idea. Zookal, an Australian textbook rental service, has promised to start using drones for deliveries in Sydney as early as next year. Thanks to Australia's laxer regulations, Zookal does not have to clear as many hurdles as Amazon, and it is starting at a slightly smaller scale: just six drones.

But the real story here is not Amazon's brilliantly executed PR coup, or the fact that you'll be able to have that new gadget delivered to you in the time it takes to watch an episode of Modern Family. This is merely the thin end of the wedge of robotic air transportation.

These drones are, essentially, flying robots. Amazon is already quite at home with robots. Last year, it acquired Kiva Systems, a specialist in warehouse automation. Today, Kiva's robots zip around Amazon warehouses carrying heavy loads faster and more accurately than human beings would ever be able to manage.

In order to do this, the robots must be relatively autonomous. They must know not only where they're going and the optimal route to get there, but also how to avoid collisions with each other and other objects in the warehouse.

All of this artificial intelligence will be built into Amazon's octocopters, enabling them to deliver their packages with an absolute minimum of human interaction.

Floating high above the traffic-congested city streets, the drones are an ideal solution to an age-old logistical challenge: delivering your product faster, cheaper and more accurately. With no delivery van and no delivery guy, it will be cheaper and delivery routes will literally be as the crow flies.

Cynics will immediately dismiss Amazon's plans as unfeasible because of the US's gun crazy populous, who might take to shooting down passing drones and making off with their payloads. While this will undoubtedly happen on occasion, it is essentially similar to worrying that the whole of the US will start hijacking courier vans.

But if we can do this with small packages, why can't we do this with cargo planes? Human beings are expensive, prone to errors and heavy. Commercial airliners can already, essentially, fly themselves. Only two things are holding this idea back: security concerns and political will.

The promise of robotics is to do either what humans cannot do – such as exploring hostile planets or welding thousands of car parts per hour – or no longer need to do. Like it or not, human beings mostly just take up space in modern logistics networks. The intelligence and skill needed is increasingly concentrated in their systems and machines, and not in the people who use them.

Automated air cargo might sound like a reckless invitation to repeat the events of September 11 2001, but in time I believe we will change our minds. The technology will advance and so will our comfort with the idea. Even if Amazon's service does not succeed, the idea it embodies is too powerful to suppress. Welcome robot overlords, we've waited a long time to meet you.