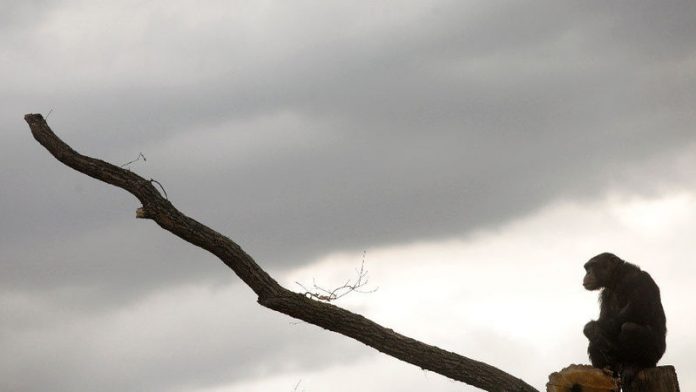 Are apes' rights just a matter of time?

Tommy (26) lives on a trailer lot in Gloversville, New York, with only a television for company.

Tommy is a chimpanzee, and if the organisation seeking to free him and move him to a sanctuary wins a lawsuit it filed this week, the result could have implications for how we view – and treat – our closest animal relatives.

Tommy is one of four chimps the Nonhuman Rights Project will be representing.

Kiko, also thought to be 26, lives in Niagara Falls, and has been trained in martial arts, though his sparring partner Charlie, "the karate Chimp", is now dead.

The other two, Hercules and Leo, are "being held" at a university, where they are used for biomechanical research.

'Personhood'
The Nonhuman Rights Project was set up by a legal scholar, Steven M Wise, in 2007, with the aim of conferring "personhood" on animal species.

The organisation has filed a writ of habeus corpus, historically used to seek freedom from unlawful detention – if one is human.

When I speak to him, Wise is on his way to court to file another case on behalf of his chimpanzee plaintiff.

"In March we decided to file suit in New York on behalf of two chimpanzees," he says.

"The following month I went to check on them and one of them had died.

We went back at the end of September and learned that the second chimpanzee had died.

At that point we became concerned and decided that we would file lawsuits on behalf of all the surviving chimpanzees in the state of New York that we can identify.

Since then, a third chimpanzee has died." He has two arguments – one of liberty, and one of equality.

"As a matter of liberty, we have affidavits from nine of the top working primatologists in the world who make it clear that chimpanzees have extraordinarily complex cognitive abilities, and these include the ability to live their lives in an autonomous way.

'Species irrelevant'
This is a cognitive ability that courts ferociously protect and our argument is that any place where these complex cognitive abilities are found in any being – species should be irrelevant – the courts should recognise that." His equality argument is that, since chimpanzees have similar cognitive abilities to humans, "to simply pick out one quality they have that's different, which is that they're not human beings, and say you're not a legal person and don't have any legal rights – we argue that is a violation of common-law equality. It's a distinction without a difference."

Or, "We admit that we are like apes, but we seldom realise that we are apes," as Richard Dawkins put it in an essay for the Great Ape Project, another organisation, founded by ethicists Peter Singer and Paola Cavalieri, devoted to the rights of the hominidae family (humans, chimpanzees, gorillas, and orangutans).

It isn't the first time that people have sought to grant rights to apes, including releasing them from captivity or entertainment purposes, or banning their use in research.

In 2010, the Great Ape Project sought to get a chimpanzee called Jimmy released from a zoo near Rio de Janeiro (unsuccessfully).

Another similar case in Brazil went through the courts but the chimp, Suica, died during the process.

Great Apes Project
In 2007, the Balearic Islands, an autonomous part of Spain, granted personhood to great apes, and the Spanish Parliament later approved a resolution extending their rights, though according to a spokesperson for the Great Apes Project this has not become law yet.

In New Zealand and Britain, as well as several other European countries, experiments on apes are banned.

"I think that people in the future will look back," says Wise, "and see this as the opening salvo in a sustained, strategic litigation campaign that led to a breach of the personhood barrier which currently divides humans from nonhumans." – guardian.co.uk © Guardian News and Media 2013