Blyvooruitzicht: Desolation in the land of plenty 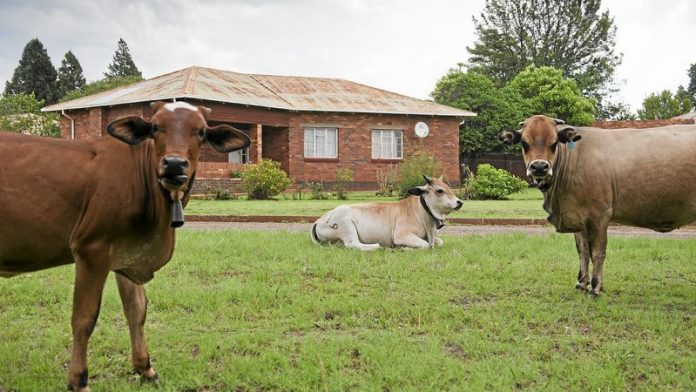 The town of Blyvooruitzicht is covered in dark-green grass dotted with patches of purple from the jacaranda trees. Nature is growing over the rusted remnants of mining, reclaiming the sludge pipes that run across the town from the slimes dams to the mines.

The area looks desolate – an abandoned town that was once prosperous. Its huge mine hospital is eerily silent, its long corridors punctured by rays of ­sunlight coming through smashed windows. Each step brings a crunch of glass.

Every view from the town is of the Blyvoor mine, hence its name, which means "the town that overlooks Blyvoor".

Streaks of rust run down the corrugated iron walls of mine buildings, and the cement walls of the lift shafts are dulled with age. There are few signs of life, but there are people here.

Standing at his gate with his blue bicycle, Klaas Madisha (46) says he worked at the mine for nearly three decades. He knows the exact day he started – "June 5 1985". He lost his job in August when the mine went into liquidation and its 1 500 workers were left to fend for themselves.

They now live in continued uncertainty. The homes they live in – Madisha’s is part of a small neighbourhood built next to the mine in the 1940s – are owned by the mine, so they could be evicted by a new buyer – if one is found.

"It is very difficult now because we do not have work. Before, we had a strong community and people had work. The children went to school. Now everyone is leaving," he says.

His family has gone back to Zebetiela in Limpopo; his four children are now the responsibility of their grandparents. "It is Christmas now so we must buy our children clothes for school next year, and presents. But we can’t now, and the children have gone back home."

Taking off his Zion Christian Church badge to pose for a photo, he says he will probably leave in the new year if he cannot find work.

"We didn’t have the power to stop them [the owners of the mine]. Who are we? We are just workers." He is calm when he says it, rarely showing enough energy to lift his arms to gesticulate. What he wants is information so he can decide what to do next. Community meetings were held before the closure, but nothing has happened since.

Near his house, Alfred Letsoalo is digging into the dark red and brown earth to plant spinach. Like most of the other plots, the garden is newly planted as locals try to supplement their food supply.

His collared shirt and sandals are speckled with dust, and he presents the back of his hand to shake hands.

"The mine closing is very bad news for the community." He is looking after his son’s house while he is away; both generations lost their jobs at the mine. His two granddaughters follow him everywhere. "You can’t leave children alone. They must come with you everywhere because there is no morality in this country now," he says, resting his arms on the faded white fence as one of the children runs away from a chicken, screaming.

The 65-year-old began working at the mine in the 1970s and says that at least now he can claim a pension after losing his job. His son does not have this safety net. "I am worried about my son. Unemployment is not good for people. And now we have a whole community where people are not occupied."

The street-light pole across the road from his house sports a faded ANC election registration poster: "Shape your future. Get your ID now." The nearby orange electricity substation is emblazoned with graffiti about sex and the Fifa 2010 World Cup. In the distance, the rocky hills and tall cement shafts are a constant reminder of the gold-mining heritage of the area. This is home to one of the world’s richest gold seams, and every valley is mined by a different company.

Novusile Mantyi says her husband came here from the Eastern Cape because of the gold. "There was no work at home, so we came here and it was good. There was work and we made a family."

Her once cream-coloured home is now dull and fading. The roof is a mix of its original red and rust. There is more rust than paint. "The mine disappeared for no reason. Everything was fine and my children had a future; now that is gone."

Her husband has gone back home with four of their children to live with his parents. She has waited for her eldest son to finish school, but her brother is coming at the weekend to pack everything they own in a bakkie and move the rest of the family. "What do we do now? There is no work and no future for us. I would cry before in the night when this happened."

Now she is composed and dressed in a bright blue shirt and a green blanket. Standing on her neatly cut lawn, she chats with her neighbours with the happy shouts of children playing football in the background. "The children do not know what this means, but we have the worry."

Two mine companies – DRDGold and Village Main Reef – both say that the other is responsible for the mine. Last year, DRD projected that the mine would be profitable for the next two decades. But because both companies are rejecting ownership, the mine’s holding company has been forced into liquidation.

This means that the workers were paid out by their provident fund – but they have received nothing from the mine. Jacinío Casíaõ, who moved from Mozambique in 1993 to work at Blyvoor, received R150 000 from the fund. This has been used to pay debts and is being quickly eaten away by his family. "The money is good now, but what happens when it is gone and we do not have a job?"

Casíaõ says the free mine hospital has also been closed.

The liquidators did not respond to questions, but they did tell the Carletonville Herald that Eskom is about to turn off electricity to the mine, which would also include all the homes it owns.

Leigh Roering, representing the liquidators, said: "Eskom’s requirements are massive and they indicated in writing that the only way the electricity will not be cut is if there is a financial intervention." No buyers are interested, so this is unlikely.

But the energy has already gone from Blyvooruitzicht. In the potholed streets, filled with water from recent rains, people walk slowly. During the day, they sit and chat under the jacarandas. The only people working are at spaza shops. "We are just tired here," says Madisha outside his home.