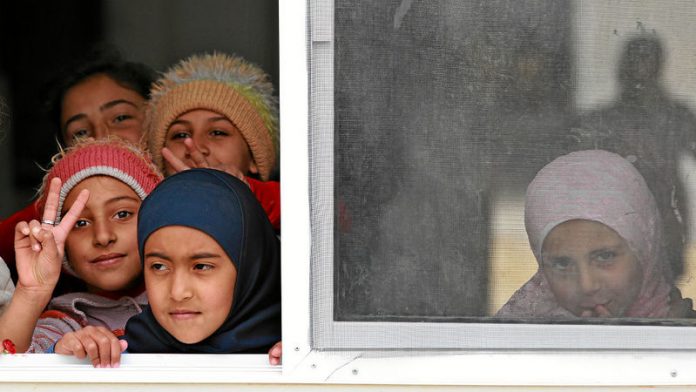 As the Jordanian national anthem blares from a crackling loudspeaker, ­followed by a song in honour of King Abdullah, ­hundreds of girls in blue uniforms in the schoolyard sing along.

But these are Syrian, not Jordanian pupils, starting the afternoon shift at the Rufaida al-Aslamia school, named after the first female Muslim nurse.

Moments before, there was an atmosphere of organised chaos as one set of girls left and another arrived. The teachers, all women in headscarves, shepherded the Syrian girls into rows, where they performed perfunctory arm stretches before breaking into song.

Almost 80 Jordanian schools, most of them in the poor governorates (counties) in the north, have introduced two daily school sessions to cope with the influx of Syrians that has stretched Jordan’s public resources, including health and education, to breaking point. Jordanians have been generous to the latest wave of refugees, but many are beginning to grumble about the strain on their hospitals and schools.

About 85­ 000 Syrians are already registered for school in Jordan, in addition to 21 000 Syrians in refugee camps. But 140 000 Syrians of school age are among the 544 000 registered Syrian refugees in Jordan. Most live in urban areas, although about 100 000 are in Zaatari camp, in effect Jordan’s fifth biggest city.

Irbid, close to the Syrian border, is Jordan’s third biggest city and hosts more than 126 000 refugees.

At Rufaida school, Jordanians attend from 8am to 12pm, and Syrians come in the afternoon (12.30-4pm). Last year, 30 new teachers were hired, and 36 this year. Double shifts were introduced a year ago to cope with the influx of refugees, reflecting the determination of donors and the Jordanian government to avoid a "lost generation" of embittered youth whose education has been cut short by civil war.

The education campaign is largely funded by the United Nations, which aims to direct a large chunk of the $5-billion it is trying to raise for the Syria crisis to children. The United Nations Children’s Fund (Unicef) estimates that 100 schools need to run double shifts to cope with demand, compared with the current 77.

Initially, Jordanian and Syrian girls were mixed together at Rufaida, but that ended amid tension between the two groups. Some Jordanians accused the refugees of taking places from locals and voiced resentment when classes were shortened from 45 to 35 minutes. Different educational levels also posed a problem, according to Jordanian teachers.

"The level [of education] of Syrians is lower than Jordanians, in English, mathematics, science. English is the most difficult [for them]," said Zenab al-Horani, a maths teacher.

English is taught as a second language in Jordan, but not in Syria. Some of the Syrian children were aggressive, a symptom of the psychological stress they had endured, she said. "We were told to let them talk about their situation, give them the freedom to speak, let them release the tension, so we could absorb it."

The crisis has created a surge in demand for teachers, posing problems of quality. To deal with this, Unicef has helped to fund teacher training as donors are conscious of the need to help Jordan to cope with the strain on its public resources. But the main challenge was to get Syrian children into school.

In Irbid, Unicef partnered with Save the Children to increase attendance. Initially, Syrian parents appeared to feel little urgency about getting their children into school as they believed the crisis would be short-lived, and they would be going home soon. With the crisis in its third year, however, that optimism has evaporated.

Other factors have disrupted registration, including a lack of places. To persuade parents to send children to school, Save the Children resorted to sending about 30 volunteers door to door in areas where refugees had congregated in Irbid.

Some children did not want to be separated from their parents after traumatic experiences. Lack of money was another problem, as was distance. Some children were already working in supermarkets or selling sweets at traffic junctions to bring in cash.

"We had volunteers knocking on doors in a big back-to-school campaign," said Ala’ al-Qu’ran, a social worker for Save the Children in Irbid. "In the beginning, it was very difficult to convince parents that education is important, especially people from rural areas. It took many sessions to convince them of the long-term importance of education."

To make up for the loss of income from children and help with schoolcosts, Saudi and Kuwaiti donors have provided money for rent, for example. The back-to-school campaign has led to 17 000 Syrian school children being registered in the Irbid region in the past two years. But schools cannot cope with extra demand: the waiting list for Syrians for school places in the region has 4 000 names. In some schools, containers have been brought in to house extra children.

At Rufaida, there is no denying the enthusiasm of a class of Syrian 12-year-olds in an English lesson. Hands shoot up as the teacher asks for examples of "comparatives" after writing "the laptop isn’t as big as the old computer" on a green board with a piece of chalk.

In a maths class, a teacher writes up fractions and girls take turns to work out which of two numbers, 11/4 or 31/2, is bigger. Sandy, a shy 10-year-old, goes up to the board to scribble the answer. One of five children, she lives in a third-floor apartment of two rooms and a kitchen/hallway in the university district. "I have a lot of friends, I like Arabic class and I like to read stories about SpongeBob," she says.

Her family comes from Homs, Syria’s third largest city, which has been dubbed the "capital of the Syria revolution". They arrived in Jordan a year and a half ago, walking the last 40km with a group of 60, surviving on biscuits and cheese for a week.

Save the Children persuaded her parents, Abdul and Yousra Azez, to send their children to school after they had missed a year. The children, aged seven to 13, seem cheerful, but it is unclear how long they will stay in Jordan. Abdul, who sold a small plot of land to finance their escape, says he wants to get to Turkey and eventually Europe, "where they respect humans and animals".

He says Syrian communities in Irbid are beginning to discriminate against each other, claiming that Syrians from Dera’a favour each other when distributing relief supplies, as do Syrians from other regions.

For Abdul, the inability to get work ­­– registered refugees are not allowed to work ­– is grinding him down. "We escaped death in Syria, but we are dying here," he said. "I know it is very dangerous to try to get to Europe, but it is better than staying here." – © Guardian News & Media 2013

International crimes must be prosecuted and domestic jurisdictions are well placed to do this. Domestic prosecutions based on universal jurisdiction are on the rise
Read more
World

Yemeni children in critical need of medical care were evacuated Monday from the rebel-held capital Sanaa, in what the United Nations hopes will be...
Read more
Opinion