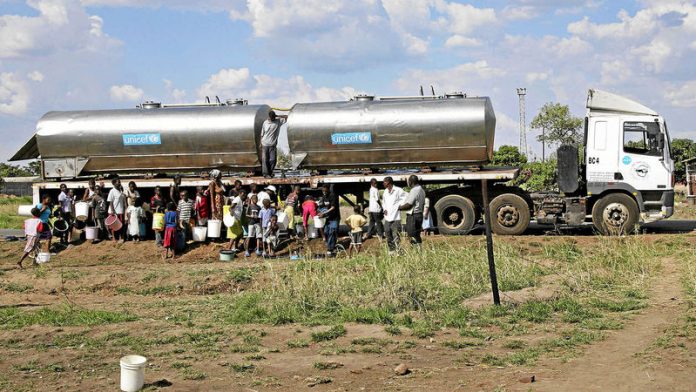 Harare has asked the United Nations to bail it out by scaling down its humanitarian programmes and channelling funds to development work that will support Zanu-PF's economic revival blueprint, the Zimbabwe Agenda for Sustainable Socio-Economic Transformation (Zim Asset).

Zim Asset aims to grow the economy by 3.4% this year and by 6.1% in 2014, with the ultimate target of achieving a 9.9% growth rate by 2018 — but the government has been struggling to secure funding for these plans.

Among other things, Zim Asset seeks to rebuild infrastructure, re­open closed factories, pay off the country's external debt and provide cheap housing and better access to identity documents. It also seeks to run all government buildings on solar energy by 2015.

Now Harare has found a way to lean on the UN and make it partly fund the ambitious five-year programme.

‘Cut down aid'
The government made the request for the UN to downsize humanitarian work during the high-level annual review meeting of the Zimbabwe United Nations Development Assistance Framework (Zundaf) at Pandhari Lodge in Harare last week.

The meeting was attended by government officials and senior officials of the UN country team.

Presentations made at the gathering seem to suggest that, although the UN is willing to assist the government, it is concerned about cutting its aid provision.

"As we embark on the remaining cycle of the Zundaf, let's all minimise analytical programming and aim to produce more tangible results that will improve the livelihoods of the people of Zimbabwe," said the deputy chief secretary to the president and Cabinet, Dr Ray Ndlukula.

"This is quite possible now, considering that the United Nations country team in Zimbabwe and the government have agreed to scale down on humanitarian activities and integrate humanitarian work into recovery and development.

"This programming orientation tallies very well with the development thrust of the new government of Zimbabwe, where people-oriented development is taking centre stage."

UN is reluctant
Ndlukula said Zim Asset should be supported by all stakeholders for it to succeed.

"Since Zim Asset is the economic blueprint that is guiding the operations of government until 2018, there is a need to align the Zundaf with Zim Asset to ensure that there is no programming disjuncture between the government thrust and Zundaf," said Ndlukula.

A source close to the developments said the UN is reluctant to buy into the idea of reducing humanitarian assistance but also wants to maintain cordial relations with the government.

The source added that the UN is willing to align the Zundaf with Zim Asset but without having to channel all its resources to the government, as it would like to fund other nongovernmental organisations (NGOs). But officially it would cooperate with government.

Dr Alain Noudehou, the UN resident co-ordinator in Zimbabwe, said at the review meeting the Zundaf had achieved some positives, but noted that the country still has numerous challenges for which it requires humanitarian help. "Despite our best intentions, it is important to remind ourselves that poverty remains high.

"I am highlighting some of these key challenges because they are critical and require urgent action. I am also highlighting them because, working together, we have a better chance to address them."

UN's position
This week the Mail & Guardian asked Ndlukula about the implications of the government's move, considering the numerous challenges facing the country.

He insisted that the government had not stopped the UN agencies from doing humanitarian work, saying that Zimbabwe's recovery process would lead to the empowerment of more people. He said humanitarian work would continue in areas such as poverty alleviation.

Asked of the UN's position, the UN's communication specialist Sirak Gebrehiwot said scaling down humanitarian assistance is a "collective decision that has been taken by government, the UN and humanitarian partners in response to the improved situation in the country".

Gebrehiwot said the UN would continue with other forms of assistance but that "the objectives of the UN are informed by national priorities and internationally agreed goals".

He confirmed the UN will work with the government to ensure that its work supports Zim Asset.

'Act of desperation'
The National Association of Nongovernmental Organisations' chief executive, Cephas Zinumwe, said there would be nothing wrong with the UN assisting the government to fund Zim Asset.

He said the Zundaf is a mechanism to support the government's work, which was being done through Zim Asset, but that the government is showing its desperation by asking the UN and donor countries to channel all aid through it, while cutting off NGOs.

"It's an act of desperation. They are clearly broke and want every cent they can get, even to the extent of competing for a small cake with NGOs instead of competing for the bakery. The government should instead be looking at strengthening bilateral relations with other states such as the Chinese, the British and the Americans and coming up with attractive and innovative ways of securing funding," he said.

Zimbabwe receives assistance from the UN under the Zundaf 2012-15 framework, through which the global body committed close to $800-million.

The first review of Zundaf last year established that the programme saw the provision of food assistance to 1.4-million ­people, the supply of essential medicine to 90% of Zimbabwe's health facilities and the distribution of textbooks.

It also led to agricultural inputs being provided to at least 80 000 households and vaccinations being given to 1.9-million children, as well as support for the constitution-making process.

Last year, UN agencies and its development partners spent $426-million on Zimbabwe and projections are that the figure will increase to $430-million by the end of this year.

Zimbabwe remains on an economic downward spiral, with about two million villagers in southern parts of the country in need of food aid.

The Botswana Defence Force’s anti-poaching unit has long been accused of a ‘shoot to kill’ policy. Over 20 years the unit has killed 30 Namibians and 22 Zimbabweans
Read more
Thought Leader

COMMENT: Opposition candidates and party can increase their chances of success at the polls by putting aside minor differences and presenting a united front
Read more
Friday

The author discusses the trilogy of novels that propelled her onto the Booker shortlist, and their relevance to present-day Zimbabwe
Read more
Africa

The cash-strapped national carrier is in the process of recouping its blocked funds from Zimbabwe, which could go towards financing the airline’s business rescue plan
Read more
Advertising