Charlize Theron on Madiba: ‘I am saddened to the depths of my soul’ 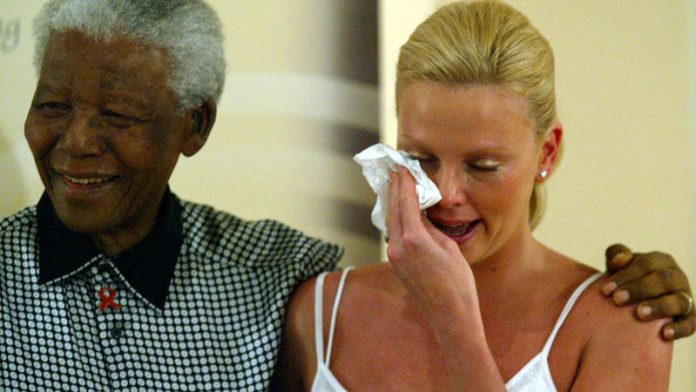 Nelson Mandela has been a father figure and friend to many, including the celebrities and politicians who poured out tributes on Twitter following the announcement of the former South African president's death on December 5.

There will never be words to say what I'm feeling right now. I am saddened to the depths of my soul. Truly.

A great light has gone out in the world. Nelson Mandela was a hero of our time. I've asked for the flag at No10 to be flown at half mast.

Rest in peace, Mr. Mandela. Your legacy and strength will live on forever. – LR pic.twitter.com/pFzRMJlb0f

It is the passing of the man, Madiba, that leaves me bereft. It is the man that I will miss and weep for. It is… http://t.co/7wDGgxeKy6

To the Mandela family, may God keep you in perfect peace at this time. For God has chosen a soldier.… http://t.co/w10HFYUSjw

President Mandela's life is the closest thing we have to proof of God. http://t.co/ce8FyjCzN1 pic.twitter.com/qg6Of20xL9

R.I.P. Nelson Mandela…may your principles of love be the guiding light for future generations. http://t.co/itkfciFn0f

Rest in peace Nelson Mandela, you have been a role model to the world. My most sincere condolences to family and friends.

Nelson Mandela was a champion for justice & human dignity, with unmatched grace. I'll remember him as Madiba, truly an unconquerable soul.

I will never forget my friend Madiba. pic.twitter.com/UX21ZZG7cg

A great heart is stilled. No statesman in history can match him for resilience, grace and forgiveness. Nelson Mandela, icon of our age.

The world's lost an iconic leader, South Africa's lost its very soul. My deepest condolences to those wonderful people. #RIPMadiba

#Mandela created @TheElders so his legacy and wonderful works can live on for centuries to come http://t.co/UxWxoMjbBv

Today marks the passing of one of the greatest freedom fighters history has ever known. We love you Nelson Mandela. #ripmadiba

One of our GREATEST leaders… Thank you for BEING the true meaning of compassion. May you be at peace now. #RIPNelsonMandela

Pop & I felt your aura when we met, I feel it today & I will feel it forever. You have done so much for humanity…

We have lost one of humanity's greatest treasures. RIP Madiba. I will never forget the lessons learned from him or his vision that lives on.

Every time Melinda and I met Nelson Mandela, we left more inspired than ever. His grace and courage changed the world. This is a sad day.