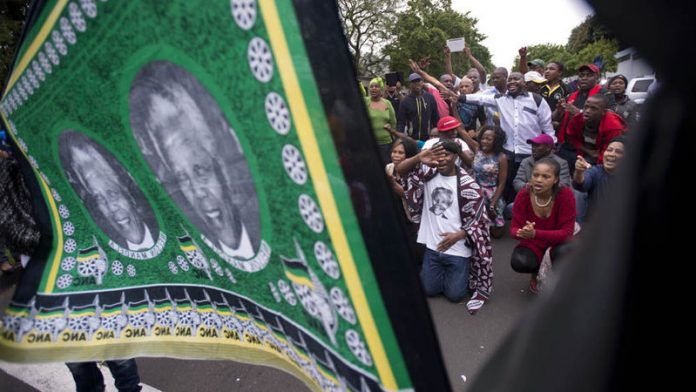 Messages of support continued to pour in on Friday morning as people woke up to the news that former president Nelson Mandela had died.

"[A] real pain chills all who work in [Parliament's] precinct," he said. "It is a pain we share with millions of people throughout our land, our continent Africa, and beyond."

Sisulu said a special joint sitting of both houses of Parliament would be held soon to reflect on Mandela's life and legacy, and a book of condolences opened for messages of support from MPs and the public.

President Jacob Zuma broke the news of Mandela's death on television on Thursday night, saying the Nobel laureate died peacefully at his home in Johannesburg at about 8.50pm, surrounded by family.

"He is now resting," said Zuma.

Flags around the country will be flown at half-mast from Friday until after his funeral.

House calls
People continued to flock to Mandela's Houghton home and his old house on Vilakazi Street in Soweto on Friday morning. Both sites saw a flurry of activity, with people arriving to pay their respects.

People lit candles and placed flags and portraits of Mandela on the pavement outside the Houghton house. A cloth bearing his face was laid on the tarmac and a group of women formed a circle around it and sang gospel songs, while others formed a large prayer ring for Mandela.

On Vilakazi Street, people marched up and down the street and around the block singing songs praising him and the role he played in the struggle against apartheid.

The African Union mourned the passing of a "pan-African icon", ordering its flags to fly at half-mast.

Cape Town Archbishop Emeritus Njongonkulu Ndungane, Methodist Church presiding Bishop Ziphozihle Siwa, the Dalai Lama, the South African Union for Progressive Judaism and the South African Association of Progressive Rabbis were among some of the religious groups to send messages of condolence to the Mandela family.

Worldwide adoration
Meanwhile, the 95-year-old's death generated an outpouring of emotion on Twitter and other social media platforms, demonstrating a fitting sense of global unity in praise of the anti-apartheid hero whose struggle for equality in South Africa inspired billions.

Most South African newspapers published their headlines in black, as a sign of mourning for Madiba.

"The World Weeps," ran the headline on the Star newspaper on Friday.

Around the globe, news channels offered rolling coverage while many newspapers and weekly magazines deployed the kind of souvenir front pages that would usually greet the death of a monarch or national hero.

The New Yorker cover featured an image of a young Mandela raising his fist with typical defiance and dignity, while Time magazine chose a more recent photo with the caption: "Protester. Prisoner. Peacemaker."

"The alchemy of character and events made of Mandela a peculiarly unspotted figure," wrote Britain's the Guardian in an editorial. "Few could deny a certain sweetness in his personality, and a largeness of mind that had room for all."

Mandela spent 27 years in jail for his battle against white-supremacist rule, before being elected president in South Africa's first all-race elections in 1994 and reconciling with his former oppressors.

Mandela had a spate of hospitalisations with lung infections and three months of intensive care at home.

News of the world
Britain's Daily Mail described Mandela as a "colossus" and "a giant who taught the world the meaning of forgiveness", joining other British newspapers for which news of Mandela's death broke just in time for front-page redesigns.

The online edition of Germany's Der Spiegel hailed Mandela as "one of the greatest fighters against oppression", while Berlin daily Taggespiegel carried "Death of a Legend" as its headline.

In France, sports newspaper L'Equipe noted Mandela's influence on athletes around the world, given how he used sport as a force for national reconciliation at the 1995 Rugby World Cup.

"A Nation's Healer is Dead," said the Washington Post, while the Wall Street Journal tweeted a preview of its Friday front page in the United States, dominated by news of Mandela's death.

The Financial Times said of the first democratically elected leader of South Africa: "Arguably a saint, [Mandela] was definitely a politician who understood power."

Personal touch
For many, Mandela's death has been very much a social media event, with Twitter and Facebook ablaze with stories, reflections and comments taking the news into a more personal domain.

"I learned of the news on Twitter and shared it on Facebook. It's a normal routine for people in this day and age," said Yuen Chan, lecturer at the School of Journalism and Communication at The Chinese University of Hong Kong.

News of Mandela's death broke too late for many of Asia's newspapers to carry it in their print editions, but Hong Kong's South China Morning Post echoed others in giving the news full coverage on its website.

When it comes to major news events of this magnitude, "there is something about having that front page in your hand, holding something physical", Chan said. "But I'm not sure if that really applies to young people, whether they have that attachment to it."

Regardless of the format, Mandela's legacy struck a universal chord, she said, prompting a global media response of rare scale.

The Onion, a US purveyor of mock news, laced its regular shots of satire with regret at the South African hero's passing. "Nelson Mandela Becomes First Politician To Be Missed," it headlined. – Sapa, AFP