Mandela: India shows there can be life beyond the great liberator 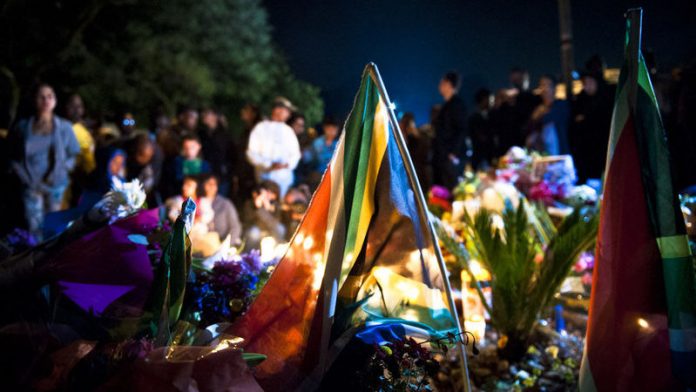 There are to be five days of national mourning for Nelson Mandela – not in South Africa, but in India. I know because I happened to wake to the news of his death in Delhi, where the grieving for Mandela is as intense as anywhere outside South Africa. Like so many other nations, the Indians have been quick to claim the great Madiba as their own. "He was a true Gandhian," said Prime Minister Manmohan Singh, casting the ANC leader as an apostle of non-violence, despite Mandela maintaining his belief in the armed struggle to the end, even restating it on his release from jail in 1990.

You can hardly blame Singh for wanting to see a parallel. India, like post-apartheid South Africa, is a nation whose foundation story tells of a long struggle against oppression – led by a virtual saint – that eventually brought liberation and democracy. That narrative, so cherished in Johannesburg, also endures in Delhi. Indeed, as South Africans contemplate their future, they could do worse than look to the dilemmas now gripping India – and that goes for the rest of us, too.

At first glance, Indian democracy is in rude health. This week I witnessed a record turnout in state-level elections, including 67% in Delhi, as voters jostled to have their say. The young especially were represented in big numbers, either manning the wooden trestle tables outside polling stations or lining up to get their fingers marked with the ink that says they've voted. But don't be misled into thinking that it represents enthusiasm for the current political order.

"All they are corrupt," Abdul Farid, 23 and a student, told me as a crowd of young men gathered to nod their agreement. He wished a plague on both the current houses – the governing Congress party dominated by the Gandhi-Nehru dynasty and the opposition Hindu nationalists of the BJP – and was trying the new Common Man party, active only in the capital and founded by a former tax inspector. But India's pundit class is convinced that the current wave of disenchantment will carry the BJP to power in next spring's general election, deposing Congress after a decade in power.

The immediate explanation for voter disaffection is not hard to fathom. India's economy is slowing: growth that sat regularly at 9% or more is now less than 5%. Prices are up, investment and industrial production are down and wages are static: it's that 1970s throwback, stagflation.

That's dented optimism, of course, but it's also made Indians even more fed-up with corruption. The Congress-led government may promise generous handouts and subsidies to the poor, but too little of that money reaches those who need it. En route, most of it disappears, thanks to what is euphemistically referred to as "leakage".

Jay Panda, a well-regarded MP for a regional party, told me that when it comes to subsidised food, only 27% of every rupee spent goes to its intended beneficiary. Sometimes he wonders if "we'd be better off dropping money from a helicopter". He told me of teachers who gladly bank their government salary, then send a low-paid, less able substitute to teach their class while they run a money-making venture on the side. To say nothing of India's perennial problems. Half of all Indians, some 600-million people, have no toilet. "This country is floating on shit and no one talks about it," says columnist Mihir Sharma who, like all those who can afford it, fastidiously drinks bottled water only.

So-called "open defecation" is still a part of rural life, while in Delhi, for all the gains of the rising middle class, the people who do the affluent's washing, clean their homes and drive their taxis rely on communal lavatories, with one toilet used by perhaps 100 people. "Child malnutrition rates are on a par with Somalia and Mali," says Vinod Mehta, founder editor of Outlook magazine. "That makes us hang our heads in shame."

Indians' readiness to tolerate such conditions is eroding, thanks in part to an ever-expanding electronic media, providing a daily reminder of how (much of) the rest of the world lives. That raises expectations, which the BJP's charismatic leader, Narendra Modi, – who has never shaken off accusations of complicity in riots that left 1 000 Muslims dead in 2002 – is only too happy to exploit. His biography – from selling tea on railway platforms to the brink of power – appeals to India's new aspirational classes.

But discontent goes deeper than a mere desire to throw the current lot out. "Some suggest that democracy has not served the people well," Prime Minister Singh said on Friday. Sharma speaks of "authoritarian envy", as India eyes the likes of Singapore and China, where "if their president says something, it actually gets done". He, like others I spoke to, worries that the populist Nodi might try to meet that longing, turning into a kind of Indian Putin: "In Russia, there are still elections, but nothing you'd recognise as democracy."

And yet, no matter how strong the desire for efficiency and to break free from the daily chaos – too many inspectors choking businesses in red tape, too few police keeping order on the streets – Indians are not about to let go of the self-rule they fought so hard to gain.

"Democracy can be infuriating at times, we can all see that," says the pundit and sometime BJP adviser Swapan Dasgupta, a print of Queen Victoria, Empress of India, on his study wall. "But Indians enjoy their democracy: they cherish it; they relish it," he says. "Too much order is anathema. You can see that from our traffic!"

For him, democracy is essential for a nation as diverse and noisily plural as India, where the banknotes confirm 17 official languages and whose states are as different to each other as the nations of Europe. It may not be efficient, but it means everyone is represented: dissenters have their voice, society has its safety valve. "A problem won't get resolved, but it will get played out," says Dasgupta. Others I spoke to said democracy might be the only thing holding India together.

There is an important reminder here for those of us who sometimes despair of democracy's inability to grapple with the greatest, most long-term challenges (with climate change perhaps the chief example). The experience of the world's largest democracy confirms that efficiency is not the only value – that democracy does not exist solely to provide good, functioning governance. In diverse societies especially, it meets another need.

Perhaps that can be a comfort to South Africans, who despite the liberation of 1994 still live in a society saddled with poverty and inequality. Perhaps it can be a comfort to the rest of us, as we remember the man who fought, above all, for the right to vote. Its shortcomings are great, but democracy is still our best hope. – © Guardian News and Media 2013

Fourteen days of quarantine in a Centurion hotel may be tedious, but for Kate Bartlett, there are plenty of laughs with new friends
Read more
Politics

The foundations of former Rivonia trialists reflect on the loyalty of the comrades who fought for democracy.
Read more
Politics

The Covid-19 pandemic is frightening, but it has also reminded us that we exist because of the care of other people
Read more
Opinion

A large percentage don’t have access to adequate housing, food, clean water or sanitation, putting them and their families at a higher risk of the coronavirus
Read more
Advertising
Continue to the category
Education