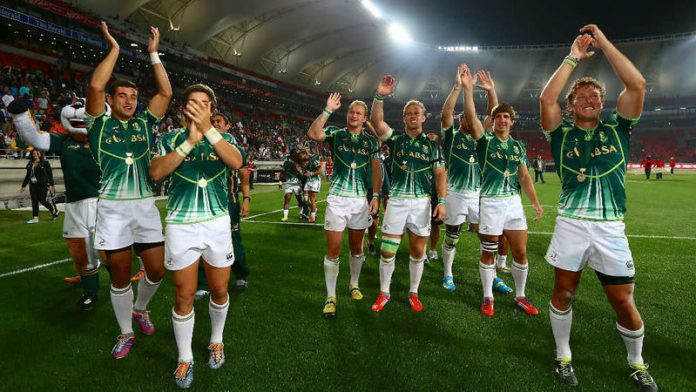 The South Africans won't care a bit that the sevens game is less prestigious than the 15-man World Cup they famously lifted with the help of Mandela in 1995 as they came from 14-0 behind Sunday to beat their old foe 17-14 in the deciding game of their home world series event.

Riding a wave of emotion throughout the two-day event after Mandela's death on Thursday, South Africa had to dig deep after a second-minute try for New Zealand by Scott Curry and another early score by Sherwin Stowers, the first points the South Africans conceded in three games.

Branco du Preez went over twice to bring South Africa within two points by the end of the first half, and captain Kyle Brown completed the win in the second half as he broke a New Zealand tackle and scampered away for the deciding score.

South Africa was marking a day of prayer and reflection on Sunday in respect for the passing of Mandela, yet the crowd celebrated the triumph loudly and fittingly at Nelson Mandela Bay Stadium in his home Eastern Cape province.

"This crowd has been unbelievable all weekend," South Africa captain Brown said in a TV interview. "It has been an emotional few days and I was hoping we could put a smile on everyone's faces after a tough few days. The composure from the guys was brilliant."

South Africa had to face up to a stern test from the three-time series defending champion New Zealanders, who made a rapid start with Curry bundling his way over and Stowers showing searing pace to outstrip the defenders three minutes later.

The teams also provided a flurry of big hits before Du Preez scored his priceless double, with his second well into added time at the end of the half.

Brown's clinching score came in high tension toward the end of the second half, which had gone scoreless until he suddenly went away after winning a lineout.

South Africa hadn't won its home event since 2008, giving new coach Neil Powell success on his first attempt. "If we were close at halftime I knew we could do it," Powell said.

South Africa had earlier swept Portugal 45-0 in the quarterfinals and Argentina 31-0 in semis. New Zealand won 19-0 over Kenya and 33-21 over Wales.

The New Zealanders still lead the standings but are now just two points ahead of South Africa. The sevens series moves to Las Vegas for round four in late January. – Sapa-AP