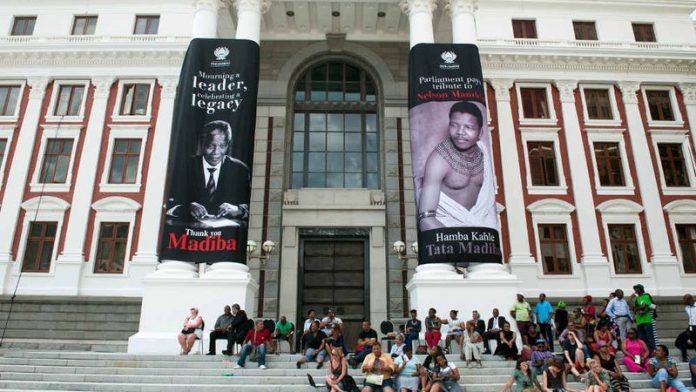 Members of Parliament and other senior politicians put their differences aside and paid tribute to former president Nelson Mandela in a subdued sitting of Parliament on Monday afternoon.

Parliament, which has been on a Christmas break for more than two weeks, recalled its MPs for a joint sitting of its two houses – the National Assembly and the National Council of Provinces (NCOP) to pay tribute to Madiba, who died on Thursday night.

The event attracted people from across Cape Town – some arrived by bus, while others queued from 7.30am to be part of the proceedings and sign condolence books. Many arrived wearing white T-shirts with Madiba's face emblazoned on them.

They later packed the public gallery of the National Assembly while others filled up the Old Assembly and another venue in Parliament.

Parliament opened to anyone wanting to attend the special joint sitting, and for the rest of the week the national legislature will be open to the public from 8am to 8pm.

The day began with much activity as the two presiding officers, National Assembly speaker Max Sisulu and NCOP chairperson Mninwa Mahlangu, and other senior MPs laid a wreath next to the flame of remembrance outside the National Assembly. A big screen outside, with speakers placed all over the precinct, played Madiba's parliamentary speeches from 1994 when he became president to 1999, when he retired. Many people brought children, including small babies.

He asked how South Africa and the world would carry forward Madiba's legacy.

"At this very moment our nation and, indeed the world, is undergoing an epochal experience where history-ending and history-making intersect in ways rarely seen before.

"As the one chapter is closing on the life of this lovable revolutionary, another is opening, prefaced by the question whether Mandela's remarkable contribution to human progress will simply pass into historical memory like that of great men and women before him, or whether it will occasion a leap of faith in those with the power to make a difference to the abject social experience of the overwhelming number of the world's people in whom Mandela's life was bedded?"

Motlanthe said Mandela's dream did not end with the 1994 democratic breakthrough, nor has it ended with his passing.

"His dream of building unity, democracy, non-racialism and non-sexism only started to gain traction when for the first time all South Africans exercised the right to vote for the government based on their will.

"The litmus test, however, is whether inheritors of his dream, heirs to his vision and adherents of his philosophy, will be able to make the dream for which he lived come to pass in the fullness of time.

"After the outpouring of grief, the celebration of and reflection on Nelson Mandela's life, we will have to answer the question as to how we advance towards that dream," said Motlanthe.

He said if South Africans succeeded in bringing Mandela's dream to fruition as they should, that would inspire the rest of the world along the same path.

"What must remain and grow within us is a sense of the enormous responsibility we have inherited to continue his work. He has handed the baton to us. We dare not drop it," she said.

Zille quoted Coretta Scott King, a civil rights activist and widow of Martin Luther King Jr, saying: "The struggle for freedom is never finally won.  You earn it and win it in every generation.

Zille said South Africans still had a "long walk to freedom" that each South African could use to improve their lives.

"Our work is to ensure that many more South Africans are able to use the freedoms that Madiba bequeathed them. And that they appreciate the discipline and diligence required to be free. Otherwise we betray his legacy."

She revealed that she never met him but that two weeks after Madiba came out of prison, as a nine-year-old girl, her family travelled from Umlazi to Virginia Airport in Durban North to see Madiba's plane landing, ahead of his King's Park address to the people of KwaZulu-Natal.

That was the morning he would deliver this famous injunction to the people of a province torn apart by political strife. "My message to those of you involved in this battle of brother against brother is this: take your guns, your knives, and your pangas, and throw them into the sea," said Mandela at the time.

"Although I was only nine years old, I knew that I was standing in the middle of a page in history, watching it being written before my eyes.

"As he walked over from the tarmac, Nelson Mandela looked straight at our small family and raised his fist in the air. And then, an extraordinary thing happened: I watched my father respond by raising his own fist in the air. That small act was the first time I saw my father express himself politically and in public."

Mazibuko said the challenge for young South Africans was to work to protect and build on Mandela's vision for a non-racial society.

"His compassion for the poor and the weak is now our responsibility. His devotion to the children of our country is now our exemplar. As the foremost beneficiaries of his life's work, we have a duty to take Mandela's vision and make it a reality across South Africa," said Mazibuko.

She revealed that she draws inspiration from the Mandela who stirred up his organisation from within. "Who, when he was my age, became leader of the ANC Youth League and took his place on the ANC national executive committee.

"That is my Mandela, my inspiration. I say to my fellow South Africans, look to your Mandela at this difficult time. Cherish the memory of the Mandela you hold dear; who spoke to your heart and your mind. Never let him go."

'Deserved rest'
Justice Minister Jeff Radebe said Madiba had run his race with distinction "and you now have to take a well-earned and deserved rest".

Radebe, whose speech was addressed to Madiba because "although he has passed on, his spirit moves in this House", said South Africans need to reflect deeply and safeguard all those institutions that Madiba bestowed upon the country.

He said one of those institutions was the Constitution, which everyone is obliged to safeguard. "There is no better way to thank you as parliamentarians than to ensure that the Constitution you assisted to craft will always reign supreme."

Radebe said Mandela had taught leaders the true values of humility. "Your leadership has been one that was underpinned by honesty. You were courageous and led our country with integrity. You were compassionate and generous. You warned against the devastation of war and preached peace in some of the intractable conflict zones such as when you were the facilitator in the Burundi conflict."

Radebe said Mandela's favourite theme song was the hymn Lizalis'idinga lakho! (Fulfil Thy Promise Oh God of Truth!), which he sang with much zest and vigour.

Radebe started crying, bringing many of his colleagues to tears when he read out the lyrics of the song, I Look To You.

It was not all tears though.

Congress of the People's Dennis Bloem, who normally delivers fiery speeches in Parliament, brought a light moment to the occasion when after giving a short speech about Madiba, he led the House into song. Bloem, who was called to order by Sisulu for singing, later gave a military salute to "our commander-in-chief, Nelson Mandela".

With or without step-aside, ANC has mechanisms to deal with the corrupt, says Kgalema Motlanthe