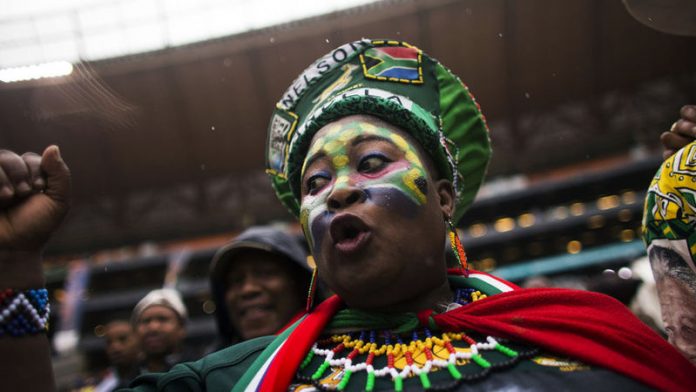 Like a flashback to the Soccer World Cup in 2010, the FNB Stadium in Soweto erupted into song, dance and the sound of vuvuzelas on Tuesday morning in honour of former president Nelson Mandela.

Festivities were already under way at 6.30am this morning as hundreds of people filed into the stadium for the memorial service of the former statesman.

Thousands more were expected to arrive during the course of the morning, in spite of the wet weather, and more than a hundred foreign heads of state and dignitaries would attend the memorial.

Hundreds of police officers encircled the building and all security personnel were on high alert. More than 1 500 members of the media had arrived by 6am.

By 7am, crowds began to sing struggle songs inside the stadium while military helicopters circled overhead. A new group of attendees erupted into song with every minute that passed and South African flags, Madiba memorabilia and umbrellas peppered the seating blocks.

On the pitch below, security personnel prepared the stage for the start of the scheduled government programme.

Impromptu band
A small band of musicians played in an aisle, while vuvuzelas and whistles roared over the music already playing on the stadium's sound system.

Large banners bearing pictures of Mandela's face and his Robben Island prisoner number, 46664, unfolded in the stands. Sombre white flowers decorated the official stage on the pitch below.

All images by Reuters

Three large marquees were erected on the stadium pitch, from where government officials, family members and foreign dignitaries would address crowd.

The service was scheduled to start at 11am with a performance by a mass choir, followed by a tribute from Mandela's friend and former Robben Island inmate, Andrew Mlangeni.

General Thanduxolo Mandela was to deliver a tribute on behalf of the family, while four of Mandela's grandchildren – Mbuso Mandela, Andile Mandela, Zozuko Dlamini and Phumla Mandela – would deliver additional tributes.

After that, United Nations secretary general Ban Ki-moon was to deliver a message from the UN followed by a tribute from African Union Commission chairperson Dr Nkosazana Dlamini Zuma.

Tributes from foreign dignitaries would follow, starting with United States President Barack Obama. The presidents of Brazil, China, Namibia, India and Cuba were scheduled to deliver their tributes after Obama.

President Jacob Zuma was to deliver the keynote address followed by a sermon from Bishop Ivan Abrahams and a vote of thanks from Gauteng Premier Nomvula Mokonyane.

'We love you Madiba'
Interviewing people in the crowd outside the stadium, Aphiwe Mkhalani from Soweto said he woke up early to be among the first there.

"It is sad that Tata is no more, though he was no longer active he had done a lot for us. South Africa is a better country because of him," he said.

Mkhalani said Mandela would be remembered for his values of love and peace. "I will always remember him as a great man of peace."

Phillip Kganyago from Sasolburg in the Free State said he would remember Mandela as a man of peace and reconciliation.

"He was a freedom fighter. He knew that you have to surrender or fight. He opted to fight to free South Africa."

Yellow ANC posters with Mandela raising a clinched fist and the words, "We love you Madiba 1918-2013", were put on the fence around the stadium and flags inside were flying at half-mast.

Massive security operation
Police were controlling access into the stadium and marshals dressed in orange coats took their positions as tens of thousands of grieving South Africans were expected to sit side-by-side with presidents, priests, queens and sheikhs.

News of the prisoner-turned-president's death at his home in Johannesburg on Thursday resonated around the world, triggering a wave of loving admiration from political and religious leaders, some of whom agree on little else.

The tributes from the presidents of the United States and Cuba will pause rivalries that date back to the Cold War as millions around the world look on.

The event is part of an extended state funeral that will culminate in Mandela's burial on Sunday in the rural village of Qunu where he spent his early childhood.

A massive security operation will swing into place as South Africans grab their final chance to unite in a mass celebration of Mandela's life ahead of the more formal lying in state.

Overflow stadiums
Although four of Mandela's grandchildren were appointed to speak for the family, neither his widow, Graça Machel, nor his ex-wife, Winnie Madikizela-Mandela, were on the programme.

About 120 000 people would be able to watch the event on giant screens set up in three overflow stadiums in Johannesburg.

Mandela had been critically ill for months, but the announcement of his death was a body blow for this recently reborn nation. And although he had been out of public life for more than a decade, South Africans looked to his unassailable moral authority as a comforting constant in a time of uncertain social and economic change.

On the eve of the memorial, Nobel Peace prize laureate Desmond Tutu described Mandela as a "magician" who conjured a united nation out of a country teetering on the brink of civil war.

"Everybody was saying we would go up in flames," he said.

"He really was like a magician with a magic wand, turning us into this glorious, multi-coloured rainbow people.

"This repulsive caterpillar, South Africa, that used to be the world's pariah, he turned into a beautiful, beautiful butterfly."

Robben Island?
A single candle was lit on Monday in Mandela's tiny prison cell on Robben Island, where he spent the harshest of his 27 years in apartheid jails before emerging to lead his country out of the shadow of apartheid and into a multi-racial democracy.

Ahead of the burial in Qunu, Mandela's body will lie in state for three days from Wednesday in the amphitheatre of the Union Buildings in Pretoria, where he was sworn in as president in 1994.

Each morning, his coffin will be borne through the streets of the capital in a funeral cortege to give as many people as possible the chance to pay their final respects.

Around 11 000 troops have been mobilised to ensure security and help with crowd control.

African representation
Ban, who was among the first to arrive, paid handsome tribute to a "giant for justice" whose "mighty life" touched millions.

Parliament met in a special session on Monday with MPs carrying single red roses as they entered the Assembly building, flanked by giant portraits of Mandela in traditional dress and as an elder statesman.

Opposition DA leader Helen Zille said every politician had a duty to carry forward Mandela's ideals of justice and equality for all.

"He has handed the baton to us and we dare not drop it," Zille said.

Africa will be represented at the funeral by Nigeria's Goodluck Jonathan and more than a dozen other heads of state and government.

Notable absentees include Israeli Prime Minister Benjamin Netanyahu, who cited high travel and security costs, and Mandela's fellow Nobel peace laureate, the Dalai Lama, who since 2009 has twice been denied a visa for South Africa.

Talk show queen Oprah Winfrey and singer-activist Bono, as well as British billionaire Richard Branson and musician Peter Gabriel, were expected to be among the celebrity mourners. – Additional reporting by AFP; Sapa