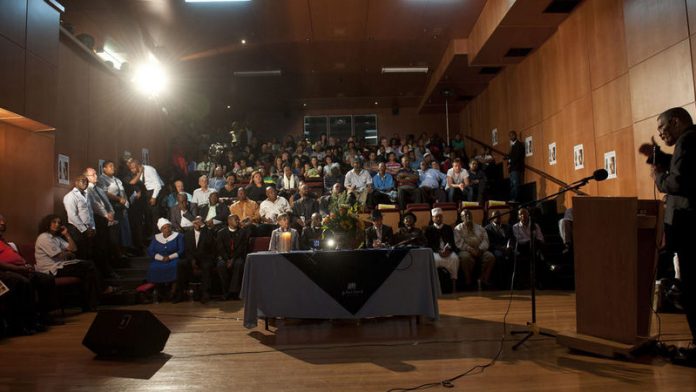 Former Robben Island political prisoner Lionel Davis has called on all South Africans to build on the spirit of reconciliation Nelson Rolihlahla Mandela practised in his lifetime.

Speaking at an emotional memorial service for Madiba at the Nelson Mandela Gateway to Robben Island on Tuesday morning, Davis told of his personal experience of the suffering Madiba had gone through while working in the lime quarry on the island.

"I spent seven years of my life in that lime quarry," Davis said, with his braided hair flowing over his shoulders. "For those who have been in the lime quarry, you would have seen this pile of stones. You will see small and big stones, white and black stones. It symbolises what South Africans can be, and how we can all come from different cultures and speak different languages."

The pile of stones was erected in the lime quarry by a gathering of former political prisoners and friends to honour Mandela's release from prison, after 27 years behind bars.

Davis said that on Robben Island, political prisoners had learnt to live together, despite their cultural and language differences.

"We can't build South Africa on bitterness. The idea of reconciliation would not have been a reality if Mandela had not made it a reality," said Davis. "It is up to us to continue to make that legacy a reality."

Up until the time the political prisoners landed on Robben Island, South Africans had been living apart, and had been compartmentalised according to race.

'We came together'
"The uniqueness on Robben Island is that for first time, most of us had the opportunity to live together," said Davis. "We came from all over South Africa, from many different political persuasions and religions, and we came together for the first time. We must now all build to break down barriers that still keep us apart."

Mandela died aged 95 on December 5 at his Houghton home in Johannesburg, surrounded by his family.

There is no doubt Madiba, with his progressive views on all topics, would have approved of the speech and prayers given by Bishop Margaret Vertue at his memorial at the Nelson Mandela Gateway.

"Sisters and brothers in Christ, we meet together on this beautiful Cape Spring morning to remember, give thanks to Almighty God and to celebrate the life of our beloved Madiba, the father of our nation, the pioneer of our new democracy, a most sterling witness for justice and peace both here at home and in the world," Vertue told the gathering of Robben Island Museum staff and former political prisoners.

"We come to pray for his wife Graça Machel, for the Mandela children, grandchildren and extended families, as well as remembering the Tembu Clam, from which our beloved Madiba stems."

Vertue said those gathered had come to honour Mandela.

"We come to remember and pray for our nation – all the people and communities of our beloved land as we deeply mourn and celebrate the life of this great man," she said before opening up the prayers.

Former warder
Among the mourners at the ceremony was a man dressed in a open neck blue shirt, who had tears in his eyes when he stepped up to speak about the man known to many as "Tata Madiba".

Christo Brand is something of a legend himself, as he was Mandela's former warder on Robben Island and later became his friend.

What was remarkable to witness was the lack of bitterness that Davis and other political prisoners feel towards Brand.

"He would never fight for himself but for others. We listened in with listening devices when he spoke to others," said Brand. "Mandela was always trying to get money for the young ones for their education. He was always fighting for the release of old prisoners, trying to get Sisulu [Walter Sisulu, ANC veteran] released, but he was already old himself."

Brand recalled how Madiba always had "a friendly face", despite the hardships he went through on the island.

"Nelson Mandela would tell us warders to study further. He would always go the extra mile for people," he said.

"When he stepped down as president, I was happy he could now retire and be with his grandchildren and family. He told us when Sisulu died [in 2003] : 'Us old geezers, we never last forever'."