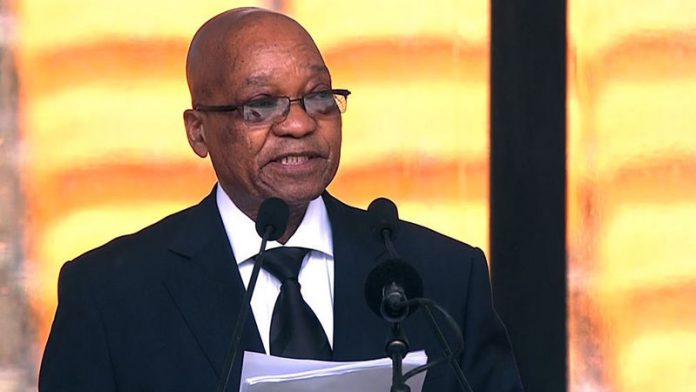 Part of South Africa's seat of government, the Union Buildings amphitheatre, will change its name to the Nelson Mandela Amphitheatre. President Jacob Zuma announced this on Tuesday during his speech to pay tribute to Mandela at a memorial service held at FNB Stadium in Soweto.

"I have the honour today to announce that the Union Buildings Amphitheatre, where Madiba was inaugurated as president in 1994, and where his body will lie in state, will with effect from today be called the Nelson Mandela Amphitheatre," said Zuma.

He said this was a fitting tribute to Mandela, who transformed the Union Buildings "from a symbol of racism and repression to one of peace, unity, democracy and progress".

Cheers from the crowd followed this announcement.

Although Zuma was booed several times by a section of the crowd attending the memorial service before he delivered his speech, order was restored by police who broke up groups of people singing during Zuma's address. Some of them were moved from the places they occupied at the stadium.

In his speech, Zuma said Mandela's death marked "an unprecedented outpouring of grief across the world, yet it is grief tinged with admiration and celebration".

"Never before has our country celebrated a life as we are doing with that of Madiba. We do not call Madiba the father of our rainbow nation merely for political correctness and relevance. We do so because he laid a firm foundation for the South Africa of our dreams – one that is united, nonracial, nonsexist, democratic and prosperous."

He called Mandela a courageous leader, the type that is able to abandon their narrow concerns for bigger and all-embracing dreams even if those dreams come at a huge price.

"He was a fearless freedom fighter, who refused to allow the brutality of the apartheid state to stand in the way of the struggle for the liberation of his people," Zuma told the mourners.

"Being a lawyer, he understood the possible consequences of his actions. But he also knew that no unjust system could last forever."

Transformation
Zuma acknowledged Mandela's achievements, among them the dismantling of the legal framework of apartheid and transformation of many state institutions that he said led to the visible improvement of the socioeconomic conditions of millions of South Africans.

He also acknowledged Madiba's contribution to fighting Aids through his international 46664 campaign.

Zuma said Mandela leaves behind "a nation that loves him dearly, a continent that is truly proud to call him an African and people of the world who embraced him as their beloved icon and most importantly, a deeply entrenched legacy of freedom, human rights and democracy in our country."

"In his honour we commit ourselves to continue building a nation based on the democratic values of human dignity, equality and freedom.

"United in our diversity, we will continue working to build a nation free of poverty, hunger, homelessness and inequality."

Mandela's body will lie in state for three days from Wednesday before being transported to Qunu in the Eastern Cape, where he'll be buried on Sunday.