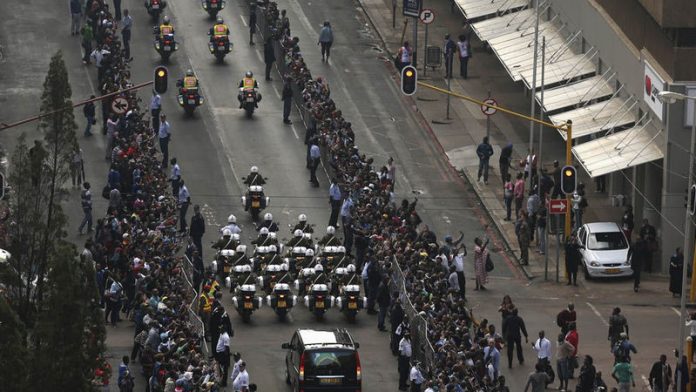 A government delegation and the Mandela family have passed through the amphitheatre at the Union Buildings in Pretoria to view the body of former president Nelson Mandela.

Members of the Gauteng provincial government accompanied the family to a viewing of Mandela's coffin, who was granted a private viewing of the body before the amphitheatre, recently renamed the Nelson Mandela Amphitheatre.

President Jacob Zuma, former president Thabo Mbeki and Minister in the Presidency Trevor Manuel were among those seen entering the Union Buildings. Nelson Mandela's wife, Graça Machel, and ex-wife, Winnie Mandela were among them.

At least 200 members of the public gathered outside the entrance to the Union Buildings waiting to be allowed in.

The mood outside the Union Buildings remained upbeat, with many people wearing South African flags or political regalia. Many said they were not able to attend the memorial service, held at FNB Stadium on Tuesday, but would not miss an opportunity to pay their last respects to Mandela on Wednesday.

Members of the public will be allowed to view the body from 12pm until 5pm on Wednesday. On Thursday and Friday, the public viewing will open at 8am until 5pm.

A group of ANC and South African Communist Party supporters conducted a separate march through the streets of Pretoria in honour of Mandela.