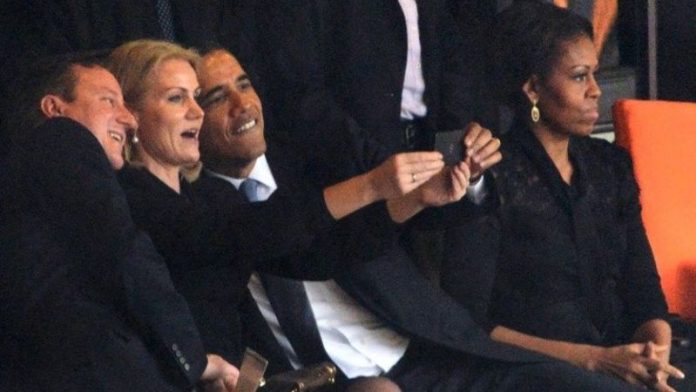 The United States is officially not amused by the online focus on US President Barack Obama's group self-portrait with Danish Prime Minister Helle Thorning-Schmidt and her UK counterpart David Cameron at Tuesday's state memorial service for Nelson Mandela.

"I know that I'm going to focus on what was most important yesterday [Tuesday] … I'm not going to be distracted by petty sidelines," said US ambassador to South Africa Patrick Gaspard in a conference call with reporters on Wednesday, when asked about the incident.

A picture of Thorning-Schmidt taking a smartphone picture of herself, Obama and British Prime Minister David Cameron quickly went viral, with some users on social media – mostly from outside South Africa – commenting that it seemed an inappropriate thing to do at a memorial service. But the photographer responsible for capturing the moment, Agence France-Presse's Roberto Schmidt, disagreed.

"I captured the scene reflexively," Schmidt recounted in a blog post.

"All around me in the stadium, South Africans were dancing, singing and laughing to honour their departed leader. It was more like a carnival atmosphere, not at all morbid. The ceremony had already gone on for two hours and would last another two. The atmosphere was totally relaxed – I didn't see anything shocking in my viewfinder, president of the US or not. We are in Africa."

Star-struck
South Africans seemed impressed that so many world leaders had travelled to the memorial, and were unsurprised that they socialised while at the service. In the FNB Stadium, Obama was warmly received, and widely praised for his touching remarks.

On Wednesday, Gaspard also took no official notice of either the behaviour of the crowd at the memorial – which the ANC characterised as problematic – or the booing of President Jacob Zuma.

The visiting US delegation, Gaspard said when asked about their reaction to the atmosphere in the stadium, had "remarked on the positive outpouring of support" for Mandela and his legacy.

He described the audience as "spirited folks".