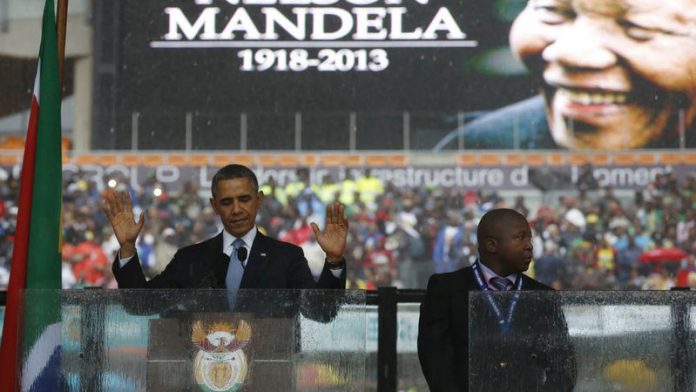 The government on Thursday partially apologised to deaf people for the botched sign language at Nelson Mandela's state memorial service on Tuesday, but came to the defence of the interpreter himself and blasted his employers.

It also said that no single government department is responsible for the fiasco and that South Africans have no need to be embarrassed.

"I'm not sure, unless that there is something that I'm missing … I don't think as a country we need to first jump and say that we are embarrassed," said Hendrietta Bogopane-Zulu, deputy minister for women, children and people with disabilities, in the first official comment on the incident from the government. "I don't think we should be. Because as a country, a mistake happened while we were trying."

Both the government communications department and the ANC, which were jointly responsible for the event, on Wednesday begged off answering questions about the "creative" interpretation of sign language by Thamsanqa Jantjie while speakers such as President Jacob Zuma and United States President Barack Obama were addressing a crowd of tens of thousands as well as live television audiences numbering in the millions.

The interpretation was so creative that at least three organisations that represent deaf people in South Africa, many experts in local sign language and half a dozen accredited interpreters have said that Jantjie made no sense.

The umbrella group Deaf SA said it has closely analysed his previous work and has no qualms in describing him as a "fake interpreter".

Schizophrenic episode
Bogopane-Zulu's depart­ment was left to answer questions about these claims, many of which she was unable to provide clarity on.

Was Jantjie, who has said he suffered a schizophrenic episode that involved seeing angels during the ceremony, a security risk? That is not known.

Was he security cleared? Probably, but his vetting is still being investigated.

Were proper procurement processes followed, and who was responsible for hiring him? That is not yet known.

But the deputy minister did spring to Jantjie's defence, saying many factors had counted against him, including:

Bogopane-Zulu also broadly defended the event organisers and the government. Jantjie, she said, had only been intended as a translator for the audience in the stadium and should not have appeared in television coverage.

Non-existing company
The government had ensured that other sign language interpreters were available for the television broadcast, she said. She added that the attempt to provide a live translation for deaf people is a victory of which Mandela would have been proud.

But there is one party the government is willing to hold responsible: the company Jantjie identified as his employers, SA Interpreters.

The company does not exist, according to registration records, but Bogopane-Zulu said the government "did track down the owners of the company" – initially. "They vanished," she said. "We managed to get hold of them, we spoke to them wanting some answer, and they vanished into clear air.

"Over the years they [Jantjie's employers] have managed to get away with this … offering substandard interpretation services."

It is not clear whether a formal fraud investigation has been initiated. Various government departments and agencies could not be reached, or they said they were too preoccupied with preparations for Mandela's burial in Qunu on Sunday to respond.