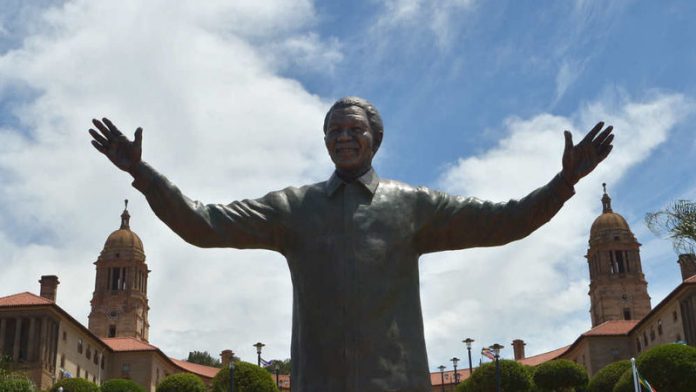 It is nearly – but not quite – a perfect vision of how things would be, had the long-awaited, long-feared, long-prepared-for racial apocalypse finally come.

The 20-seater ladies' bar at the Heilbron Commercial Hotel in the northern Free State is utterly deserted. The lights are on, the music piped from the laptop in the corner is playing, but there is nobody home. The plastic-covered chairs with their leopard-skin prints are empty, the bar is untended. A lone cigarette butt lies, long dead and cold, in one of the three ashtrays on the counter. Despite the unseasonably chilly weather, there is no fire in the small grate in the back wall. The pounding rain is slowly leaking through the frame of one of the aggressively frosted windows and starting to pool on the grimy tiles.

But something is wrong with the picture. The bottle of Klipdrift brandy behind the bar (R8 a shot, according to the price list on the side of a fridge) is heading towards empty, yes, but there is another in reserve right behind it. Nobody has raided the stash of prepackaged ­biltong hanging over the till.

Whatever had befallen this place, it had happened too quickly for the crucial supplies of brandy and biltong to be grabbed during the evacuation, but not so quickly as to leave behind the characteristic sprays of blood that come with a panga attack.

Spar of the nation
And that is not how the Night of the Long Knives is supposed to go. The many competing interpretations agree on this much: there will be two different scenes in the aftermath of black people rising up to slay their former white oppressors. Those who failed to heed the signs and warnings will be dead, murdered in gruesome fashion. Those who stand ready will be gathered in small, mobile bands, or well-fortified larger groups, fending off all attempts to wipe them and their kind off the map.

In Heilbron, in the northern Free State, it is supposed to be one of the latter. Heilbron has long been ­identified as one of the safe sites where Afrikaners and their white brethren (but no black people, no matter how trusted) could gather to make a stand.

Indeed, in 2007, when rumour spread like wildfire that Nelson Mandela had died, some believers made their way to the safety of Heilbron, gathering at the local Spar as had been recommended in a widely circulated DVD explaining the risk. Some had come with prepared supplies, others simply grabbed the kids (and, in one case, according to a person who was there, the family pets) and headed out.

On Monday, however – the day before Nelson Mandela's memorial service – even with the statesman this time absolutely confirmed to be dead, there was no sign of a gathering. The Spar was fully stocked with baked beans and potatoes, and managers said that, beside a few phone calls, some of them in jest, they had seen no sign of a gathering.

'horde' of black people
"There was one guy who phoned from Cape Town to ask if his family should come up here," said an employee, speaking reluctantly. "I said: 'You're going to drive all the way here from Cape Town while people are trying to kill you? That doesn't sound like a good plan to me'."

In 2007, those who arrived at the Spar as recommended were pointed to the Eeufees Dam just outside town, and ended up camping there. In the week of Mandela memorials, though, the municipal campsite at the dam, which charges a maximum of R66 a day for a spot, had only one set of visitors.

The young couple in their small tent, halfway between the main road through town and the picturesque dam, explained that they were on holiday. They hoped not so much to survive a "horde" of black people as catch a really big (barbel). The trick, apparently, is to leave a hook baited with an earthworm in the water overnight; the wily older fish have learnt to be mistrustful of tasty morsels that just plop into their domain.

The Suidlanders
Right-wingers have also grown mistrustful, even those most concerned with the prophecy of uhuru, Red October 2, and other variants of the Night of the Long Knives. After too many years of false warnings, and recent years of wild internet rumours, even organisations closely associated with white supremacy and militant self-defence this week advised caution.

"To run around in a state of panic like a headless chicken is pure lunacy," the Afrikaner Weerstandsbeweging (AWB) said in a message to members. "You will achieve nothing by spreading or believing rumours on social media."

All photographs by Oupa Nkosi

That was specifically in relation to rumours of mass gatherings of black people, with the implication that those groups had murder on their minds.

"Thousands of people will not be able to gather somewhere without the media knowing," the AWB said. "It would be reported somewhere."

The Suidlanders, a self-defence group that unofficially exists solely to prepare for a racial onslaught, and has long been advising on how to respond to such an eventuality, took a slightly different approach.

"The risk to us is not that a leader or leaders are busy with some sinister plan, but that there are now large gatherings," the Suidlanders told its followers, which has significant overlap with the membership of the AWB, or one of many similar splinter groups. "That raises the danger that criminal and radical elements could start an initiative of plundering that could spread like wildfire, where all reason is lost."

'Revolution risk'
In the next five months, the Suidlanders said, the risk of large-scale violence, the "revolution risk", is 50/50. This, it said, is a great time to "go on holiday". The euphemism is not a subtle one.

Insiders said the Suidlanders and nonaffiliated groups had moved away from advertising the sites of large gatherings, or even advising large gatherings, as this would merely create a "target-rich environment". Instead, those who feared for their safety were being told to select local farms to gather and await instructions on how to congregate, first locally, then regionally. Mobility rather than fortification was paramount.

Even nonbelievers think that is a rather swell idea.

"You know what scares me?" asked a white resident of Heilbron, who describes himself as not enamoured of the government, but "definitely not" a racist. "Scared people with guns scare me. You put a bunch of people with guns somewhere that black people are walking by innocently and they may just shoot somebody, then the shit hits the fan. If they want to go somewhere far away when they are scared, that sounds like a good idea to me."

• Since at least 1989, when the official end of apartheid came to be a question of "when", there has been a growing consensus among those on the far right about the apocalyptic consequences.

• The legend is rooted mostly in the predictions of Afrikaner prophet Siener van Rensburg, but its various flavours have come to include biblical reinterpretation, demographic forecasting and Germanic mysticism of both the Nazi era and before.

• Stripped of the differing specifics, it comes down to black people rising up en masse and slaughtering, or sometimes driving out of South Africa, all the white people they can find. It is most commonly known as the Night of the Long Knives, Uhuru, or Operation White Clean-Up.

• In its early versions, the timing was linked to democratic elections, or the inauguration of the first black president. But as those milestones passed, more and more believers started to agree that the trigger would be the death of Nelson Mandela. In deference to the sensitivities of their liberating hero, the thinking went, black people would hold off on the slaughter of white people until Mandela was no longer around to witness it.