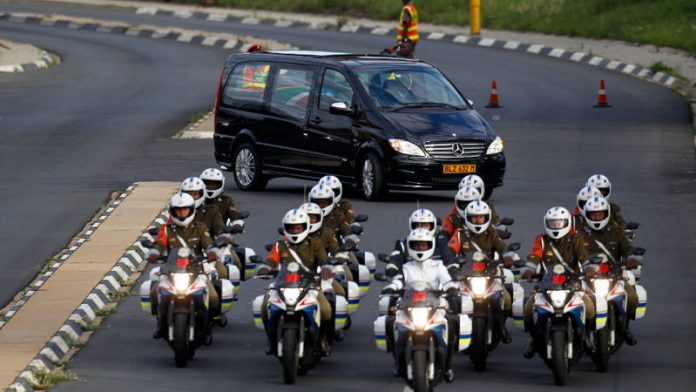 Waterkloof Air Force Base was a hive of activity on Saturday morning, ahead of the flight with the body of former president Nelson Mandela to the Eastern Cape.

Soldiers and military police officers searched all the vehicles coming into the base, while news television crews set up camera equipment on a large stretch of tarmac.

Some officers directed numerous Mercedes-Benz to a designated VIP section of the base.

Government said on Friday that the military was expected to hand over the remains to the ANC at 7am.

The ANC said President Jacob Zuma and leaders of Cosatu and the South African Communist party would deliver tribute speeches on the life and legacy of Mandela.

The military would again take over at 9am for the send-off ceremony and departure from the base.

Flight's expected departure time
The Mandela family said on Friday that several of them would accompany Mandela's body on the flight. They said the flight was expected to leave at 10:45am. "He will leave Waterkloof with members of the family, who will accompany him," family spokesperson General Temba Matanzima told reporters in Johannesburg.

"When they land in Mthatha, at about 12.45pm, the body and the delegation … will be met by members of the family, members of the Thembu nation and others who are prepared to meet and accompany the family." From there, the convoy, with the coffin, would proceed through the streets of Mthatha.

"There will be two stops. There will be a stop on York road, next to the old stadium, and there will be another stop at Ultra City for 10 or 15 minutes for people to see," Matanzima said.

From there, the convoy would proceed to Qunu, where the body would be handed over to the Mandela family by the military.

"The members of the family will [then] do their part, taking the body into the house of Madiba, and there they will wait until the next morning, when the official funeral will take place."

Matanzima said the government would provide further details of the funeral programme.

Mandela died at his home in Houghton, Johannesburg, last Thursday. at the age of 95. His state funeral will be held at Qunu, in the Eastern Cape, on Sunday. – Sapa