Syria accused of using hunger as weapon of war 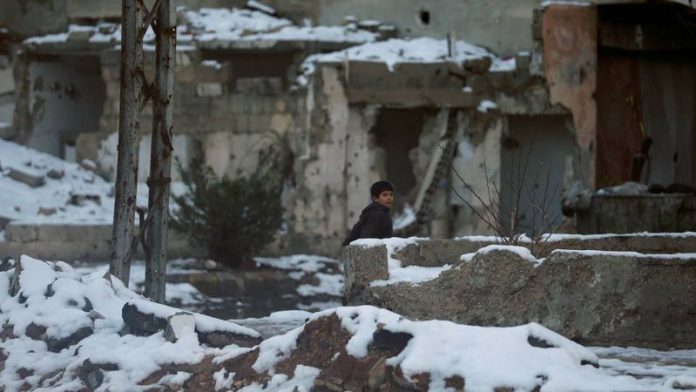 It is a 15-minute drive from the five-star hotel that houses United Nations aid staff in Damascus to rebel-held suburbs where freezing children are starving to death.

Yet it is months since convoys from the United Nations and other agencies have delivered food or medical care to many such areas – prevented by a Syrian government accused of using hunger as a weapon of war against its people.

As the United Nations launches an annual appeal on Monday for funds to help more than nine million Syrians who need aid, divisions among world powers that have crippled peacemaking are also denying UN staff the power to defy President Bashar al-Assad's officials and push into neighbourhoods now under siege.

"In government-controlled parts of Syria, what, where and to whom to distribute aid, and even staff recruitment, have to be negotiated and are sometimes dictated," said Ben Parker, who ran the UN Office for the Coordination of Humanitarian Affairs (OCHA) in Syria for a year until last February.

"According to the Syrian government's official position, humanitarian agencies and supplies are allowed to go anywhere, even across any frontline," he wrote last month in the journal Humanitarian Exchange. "But every action requires time-consuming permissions, which effectively provide multiple veto opportunities." Fighting and rebel groups are also obstacles.

The United Nations estimates about a quarter of a million Syrians are living under siege as winter bites, most of them encircled by government forces, but also including 45 000 in two towns in the north that are besieged by anti-Assad rebels.

A binding Security Council resolution could formally oblige the authorities to let aid agencies into areas like the Damascus suburbs and the old city of Homs, where local doctors say children are dying of malnutrition. But divisions between Western powers, backing the rebels, and Russia, have paralysed the world body over Syria since the conflict began in 2011.

As a result, international agencies are legally obliged to work with a government which aid workers say has used threats – say, to deny visas to foreign staff or hinder efforts to help millions of people outside besieged districts – as a way of muting criticism and discouraging attempts to break the sieges.

"It is a fundamental flaw in the international system that it is possible for a rogue state to hold its own people hostage," said a Western diplomat who works on aid issues.

"Syria … can threaten access to its own population and say 'millions will starve if my instructions are not followed'.

"The reality is there is a risk of being thrown out," he said. "You have to look ultimately at what the moral obligation is to serve as many as you can."

As far as Assad's government is concerned, said former UN Syria staffer Ben Parker, aid operations are "a Trojan horse to delegitimise the state, develop contacts with the opposition and win international support for military intervention".

To criticism that they should complain more loudly, aid workers speaking privately cited the case of a UN agency chief who ended a posting in Damascus last year after clashing with Syrian officials over access for aid distribution. Syria had made clear that the official's visa would not be renewed.

An internal UN document seen by Reuters last month said visa applications for international staff were more likely to be turned down or put on hold in 2013 than to be approved.

It described Syrian bureaucracy hampering operations, as well as difficulties posed by fighting and a lack of cooperation from numerous, often rival, rebel groups across the country.

The International Committee of the Red Cross (ICRC) said this month that both sides have blocked medical aid to the sick and wounded. "Where we haven't been particularly successful is in increasing our medical activities in Syria, which remain below our expectations," ICRC president Peter Maurer said.

"On both sides we are struggling with the argument that whatever medical aid is brought to one part or the other is interpreted as an indirect military support to the other side."

Syrians in areas where little or no aid is getting through say they feel abandoned and blame world powers for not only extending a war that has killed over 100 000 by backing warring parties but also failing to ease the impact on civilians.

An opposition activist in Damascus who uses the name Tariq al-Dimashqi and works in a field hospital in the besieged eastern suburbs of the capital says that he has seen no medicine or food from the United Nations for more than a year.

"The United Nations should do something to save civilians," he said. "They have to force the regime to end the siege."

Some medicines are smuggled in to the area, he said, but the hospital is very low on supplies.

Lack of access for independent agencies makes it hard to verify food and medical supplies in many areas. But opposition activists have posted video of the bodies of several skeletal children who local doctors say died of malnutrition.

In September, footage of the body of one-year-old Rana Obeid, ribs protruding and belly swollen, was accompanied by statements from doctors saying she was the sixth child to die from malnutrition in Mouadamiya, about a quarter-hour drive from the Four Seasons Hotel in Damascus.

More broadly, providing aid across a patchwork of front lines across Syria has proved a struggle. Of a population of 23-million, the United Nations says 2.3-million refugees have fled the country, taking the misery of the war into often fragile neighbouring states, while 9.3-million need help inside Syria.

Two million of these are in areas that are hard to reach.

This year's U.N. appeal for $1.41 billion to finance aid work in Syria has reached only 62% of its target. UN humanitarian chief Valerie Amos will launch a funding appeal for 2014 on Monday, potentially seeking even more cash.

Twelve UN staff and 32 staff or volunteers of the Syrian Arab Red Crescent have been killed and 21 UN staff remain in detention, last month's UN document seen by Reuters says – without specifying which groups were holding them.

In a country in the grip of a population explosion before the war began, half of Syria's needy are children.

"The time will come that whatever aid you bring it is far too late and the scars on children will be far too deep to repair," said Maria Calivis, Middle East and Northern Africa director for the UN Children's Fund Unicef.

This month the UN failed to deliver food to 600 000 out of its monthly target of four million, a goal never yet reached.

Of 91 public hospitals in Syria, 36 are not functioning and another 22 have been damaged, while almost half of the 658 ambulances have been stolen, burned or massively damaged, according to the World Health Organisation (WHO).

The domestic drug industry – largely based in some of the areas hardest hit by fighting – collapsed in August 2012 and has virtually halted production, the WHO added. Rights groups say the Syrian air force has deliberately bombed hospitals.

The WHO said last month that polio, which is incurable and paralyses children within hours, had spread from the eastern city of Deir al-Zor to the major city of Aleppo and around Damascus. It is the country's first outbreak since 1999.

The WHO must work through the government and a vaccination drive has not reached all areas, although the agency says 600 000 people have been reached in contested areas.

"The pressure has to be kept on" for access for medical supplies, said Elizabeth Hoff, the WHO representative in Syria.

"The outbreak and now spread of Polio Type I in Syria represents more than just a breakdown of a public health system during a time of conflict," said Coutts.

"It is symptomatic of a humanitarian response in which public health has been neglected and which remains underfunded and poorly coordinated."

Fouad said more than 70% of medical staff have left Syria due to the crisis and that no data is being collected on mental health inside Syria. Mental healthcare is a neglected area and a "heartbreaking" challenge, the WHO's Hoff said.

Leishmaniasis, a disease transmitted by sand flies which causes sores on the skin, is spreading so fast it has earned the local nickname the "Aleppo boil".

In Aleppo, once Syria's most populous city, Fouad said no one had had heart surgery in more than a year: "This is not a new crisis. This is not the first conflict," he said.

"The UN should be doing better."

Peggy Hicks, the head of advocacy for lobby group Human Rights Watch, said that UN efforts have lately made some modest progress in eliminating bureaucratic obstacles to aid.

"But with winter fast approaching, these grudging steps by Syria are nowhere near enough," she said.

"The UN should keep emphasising that the real test is a change in the situation on the ground, particularly for the 280 000 Syrians in besieged towns."

On October, the UN Security Council urged the Syrian government in a non-binding statement to allow immediate cross-border aid deliveries. UN aid officials said that access has improved somewhat since then.

UN aid chief Amos said this month that there had been "modest progress" with Damascus, such as issuing 50 visas for international staff and permitting the setting up relief hubs to store and distribute supplies. But UN convoys from Turkey are still forbidden and besieged communities are still blocked off.

Last week, the UN announced that Damascus had approved a first airlift to Syria from Iraq to supply the mainly Kurdish north-east, though snow has so far delayed the start of flights. The breakthrough followed secret talks chaired by Amos with countries including Syria's allies Iran and Russia.

"There is always room for more vocal engagement," said Hicks. "I think there is more room for explicit movement and to pressure the Security Council to act on their words." – Reuters