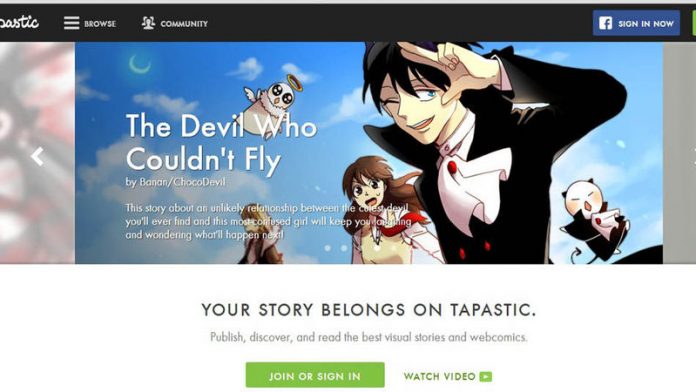 Chang Kim, founder of Tapastic, spoke to Arthur Goldstuck about all things comics related. Here's what he had to say:

How did your love for comics begin?
When I was growing up I read a lot of "education comics". Many of the important things in life that I still remember to this day came from comics. That's how my love for comics began; the love that was obviously rekindled recently by the resurgence of webcomics.

Which are your favourite classic comic books?
Some of my favourite "print comics" are actually what can largely be categorised as "newspaper comics" – think Calvin and Hobbes. I also still love quotable comics like The New Yorker's daily cartoon. Sunday newspapers used to feature cartoons from some of the most amazing comic creators – I wonder how many of them are successfully adapting to the fundamental shift to digital.

Are there special aspects of Korean comics culture that motivated you?
In Korea, webtoons [and] webcomics are read by the vast majority of the population. Because I grew up with Korean webcomics, I knew there were better ways to bring digital comics to everyone than how they are currently found and read in the US. It's in part to that cultural experience and [through] my involvement with Blogger the idea for Tapastic, a YouTube style service built for comics, was conceived.

What was the inspiration for Tapastic?
My personal experience as a webcomic reader. I enjoy the content, but had to go through so much work to be an avid reader, constantly re-bookmarking my place and having to remember to return on certain days among many other difficulties. As I continued to look into the state of webcomics in the US, I realised that there were a great deal of inefficiencies for both the readers and the publishers, and wanted to change that.

How do you think you'll achieving your vision?
Step by step, we're building a platform and a community for comics that brings us one foot closer to the next step. We've become the home to over a thousand series and hundreds of thousands of regular readers in about a year. We have higher traffic than DC Comics and every other independent comic community and publishing platform. Readers and creator/publishers alike are happy with the direction we're moving in, and every day we gain more momentum.

How have artists benefited from their involvement in Tapastic?
Because Tapastic is inherently a collective, the first benefit is their ability to connect and collaborate with other artists on the platform behind the scene. We know there have been several cases where creators became "pen pals" chatting on Facebook and sharing their experiences on Tapastic. Many creators have also benefited financially by migrating their readers and continuing to build up their audience to become eligible for and earn advertising revenue and individualised monthly minimum guarantee contracts based on their continued performance. It's always nice to have a little security.

Are there any notable success stories yet of Tapastic launching artists into the mainstream?
Not yet into the mainstream – if you define that by getting a job with existing print publishers – but we've brought many underdogs into the forefront like Devin Bosco Le of Randomphilia.

Where do you see Tapastic in five years from now?
I can't give away everything, but I do see Tapastic at the forefront of independent digital publishing. I see it as something that becomes part of our daily conversations discussing our shared experiences reading the visual stories that creators provide for us from and to a worldwide audience.

Where do you see the comics genre a decade from now?
I see the medium of comics more integrated with other pop culture, not just the storylines. More and more homes will have tablets and smartphones, which teens and young adults will use to consume the majority of their entertainment, including comics. I also see comics becoming more and more integrated with technology with a tasteful amount of interactive elements. The kids that grow up with them will most likely be unfamiliar with monthly paper comics the same way teens today have no idea what floppy disks are.

What are your favourite gadgets, and why?
The new Samsung Galaxy Note 3. The new Note series features this technology called "S-Pen", which at first seems nothing more than a dumb plastic stylus pen, but is actually jam-packed with technologies that effectively turn your mobile device into a comic creation tool. The original technology is actually licenced from Wacom, the company behind Bamboo tablets, which are the de facto creation device for many  of digital comic creators. –? Gadget.co.za

Arthur Goldstuck is founder of World Wide Worx and editor-in-chief of gadget.co.za.

Cartoonists and commentators will be on a short leash if a Bill is rushed through that would make ridiculing someone illegal.
Read more
World

The artist intended to challenge political correctness in art, and he was naive to think the effect of depicting the prophet would be limited.
Read more
Opinion

Stage fright to success: Zapiro on 21 years with the M&G

Cartoonist Jonathan Shapiro reflects on his coming of age as the newspaper's chief artist provocateur and slayer of sacred cows.
Read more
Opinion

Time for a cold shower

Cartoonists are our<i> iimbongi</i>, the patriots who speak truth to power when necessary.
Read more
National

Anger in their ink

The <i>Weekly Mail</i> was the first home of the country's best cartoonists, writes Julia Beffon.
Read more
Advertising
Continue to the category
Education