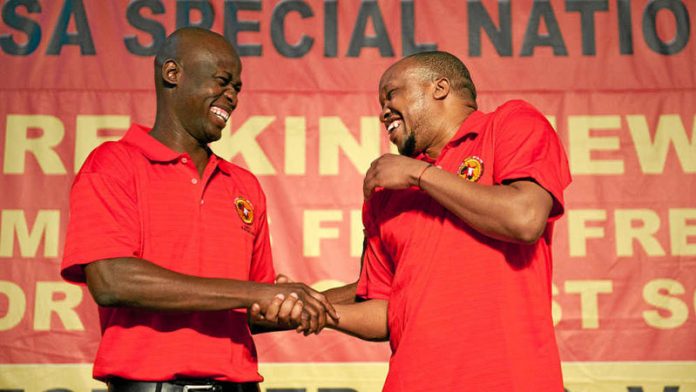 Trade union federation Cosatu's largest affiliate, the National Union of Metalworkers of South Africa (Numsa), will not campaign for the ANC next year or support the party financially, the union resolved at a special national congress in Boksburg this week.

It also decided to withhold its R800 000 monthly subscription to Cosatu.

"Numsa as an organisation will neither endorse nor support the ANC or any other political party in 2014," general secretary Irvin Jim told a news conference at the end of a meeting of its members on Friday.

He said Numsa officials or workers could campaign for the ANC but would have to do this "in their own time and using their own resources".

"It is clear that the working class cannot any longer see the ANC or the SACP as its class allies in any meaningful sense," Jim said.

He also called on Zuma, who was booed at a memorial for anti-apartheid legend Nelson Mandela on December 10, to resign.

United Front
The week-long congress, attended by about 1 200 delegates from across the country, also resolved to persuade Cosatu to break off its alliance with the ANC and the South African Communist Party, which it claims has been co-opted by right-wing forces. Instead, Numsa plans to establish a new "united front" that will co-ordinate struggles in the workplace and in communities in a similar way to the United Democratic Front in the 1980s.

The united front will probably include organisations such as the Association for Mineworkers and Construction Union (Amcu), the Democratic Left Front, the National Transport Movement and Julius Malema’s Economic Freedom Fighters, and will fight for the implementation of the Freedom Charter. It also intends to provide counterarguments to what it terms the "neoliberal policies" of the National Development Plan. The ultimate goal is to form a labour party by 2015 that will contest elections in 2019.

Numsa will convene a conference on socialism next year and will commission an international study on the formation of working-class parties, such as those in Brazil, Venezuela, Bolivia and Greece.

"The Freedom Charter as the basis for our existence as an alliance has not found expression in government policies. The ANC-led government has continued to ignore and duck the question of how to fundamentally change property relations in the country. The ANC-led government has also imposed the NDP, which is a neoliberal policy embedded in the failed Growth Employment and Redistribution [Gear] strategy of 1996. Given its track record of not delivering on its manifest promises, there is no guarantee that, even if the ANC comes up with a progressive platform for 2014, that manifesto will be implemented," the union states.

No party endorsement
​Numsa says the union will not endorse any political party in 2014.

"When unions are in Cosatu they should be part and parcel of our decisions. We don't force them to pay if they don't want to support the ANC victory but we hope the union will reconsider its decision."

Dlamini said Numsa’s decision to try to change Cosatu from within was "a better outcome of that congress under the circumstances".

Dlamini said he expected Numsa to abide by Cosatu decisions. "I don’t expect a half Numsa in Cosatu; I expect a full Cosatu affiliate."

Meanwhile, the Unemployed Peoples' Movement (UPM), said in a statement there is now a real possibility that workers in Numsa and Amcu "and poor people organised into social movements and community organisations can come together in a new and democratic formation capable of uniting struggles in workplaces and communities for a truly liberated South Africa".

Robust discussion
The UPM's national organiser, Ayanda Kota, told the Mail & Guardian that the organisation was excited about the direction Numsa was taking.

"They’re saying the same things we've been saying. We're in touch with Amcu and the National Transport Movement and we're now having a robust discussion about the role we would like to play," said Kota, whose organisation is affiliated to the Democratic Left Front.

Numsa is planning several strikes in the first quarter of next year to demand, among other things, the beneficiation of all strategic minerals, a ban on the export of scrap metal, the nationalisation of the Reserve Bank and mines, the de-commercialisation of state-owned enterprises and the re-nationalisation of Sasol and ArcelorMittal South Africa.

The union is planning a national strike on Budget Day, February 26. – Additional reporting by Reuters